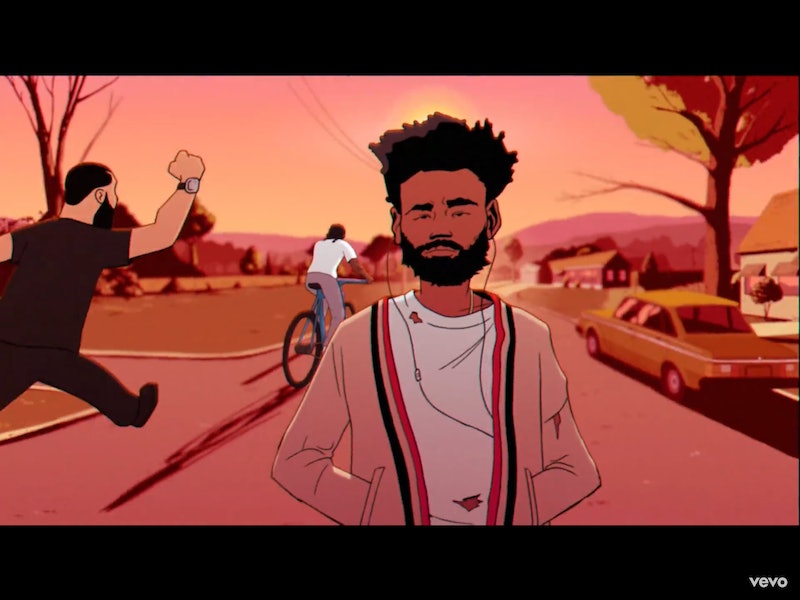 Following the July 11 release of his Summer Pack, which includes tracks "Summertime Magic" and "Feels Like Summer," Childish Gambino has finally released a visual to accompany one of the anthems. That's right — Childish Gambino's "Feels Like Summer" music video is finally here, and it features a ton of celebrity cameos, from Nicki Minaj and Travis Scott, to Michael Jackson.

The two-track sensation was released, what appeared to be, on a whim, as the artist, also known as Donald Glover, tweeted the YouTube links to his fans unexpectedly in the heat of the season. But, of course, it didn't take long for the songs to become the summer anthems many of his fans were looking for. "Summertime Magic" is pretty much the basis for every hot and joyous seasonal memory, and its light lyrical content totally helps to illustrate this. On the other hand, "Feels Like Summer" includes a message that's anything but "carefee," as its lyrics focus on the darker side of the time of year — climate change, pollution, and droughts.

Released Sept. 1, the animated video for "Feels Like Summer" matches the somber tone expressed in Gambino's poetry, but also highlights some key moments that every child of the summer, or fan of hip hop, will appreciate.

Centered around an animation of Childish Gambino walking down his neighborhood block, the visual includes cameos from the industry's most popular celebrities getting their summer rituals on, too. From Will Smith washing his car, which is an obvious nod to his '90s hit track "Summertime," to Gucci Mane sunbathing while some hip hop heavy-hitters do the "Electric Slide" around him, the music video oozes of Black summertime realness.

Migos Playing Basketball In The Street

Will Smith Washing His Car

Chance the Rapper & Jaden Smith Next To Birdman On The Grill

J. Cole Having A Water Fight With Rae Sremmurd

In addition to featuring some of Hollywood's biggest names, the visual for "Feels Like Summer" also references some key pop culture moments too. In one clip, an animated Minaj and Scott are seen playing nice until the Astroworld rapper takes out the center of Minaj's block tower, causing the structure to crumble — which can be interpreted as a nod to Minaj and Scott's recent drama over who should've had the number one album.

And if you blink, you might just miss a cameo of rapper Future riding down the block on a bicycle with Drake trying, but failing, to keep up with his speed. It's hard to say what Gambino was trying to reference with this exactly, but one could assume it has everything to do with the multi-talent's perception of who's a better hit-maker.

The visual also sheds light, or a cloud of darkness, rather, over the many talks of mental health awareness happening in the industry right now. While other artists are pictured having fun in the sun, rappers Kid Cudi, Chris Brown, Kanye West, and Childish Gambino, himself, are shown in casts of darkness — seemingly referencing each of their bouts with mental health issues.

Gambino's visual also pays homage to some key figures who are no longer living. A young Jackson and Whitney Houston are shown donning some of their iconic looks, offering the perfect dose of nostalgia.

Just as "This Is America" took the world by storm with its deep messgaing, "Feels Like Summer" is bound to start a few conversations of its own. Not only is it aesthetically pleasing, and even comical in a few areas, the video totally serves as a time capsule for some of the industry's most talked about moments of the year.

There's no telling what else Gambino has up his sleeve, but if it's anything like his latest music video, you can bet it's going to be a game-changer.