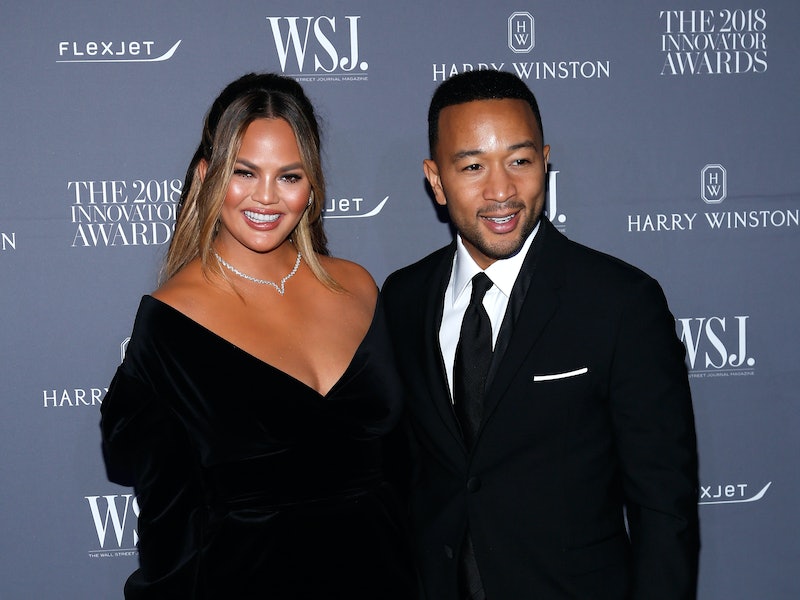 While most of us might not be lucky enough to receive and invitation to a holiday party at the Teigen-Legend house, that doesn't mean that we can't still kick off the Christmas season with a celebrity filled celebration. The special celebrity guests for Chrissy Teigen and John Legend's Christmas special have been announced, and the star-studded cast list is guaranteed to help make all of your holiday dreams come true.

According to E!, everyone's favorite celebrity couple will kick off the holiday season with NBC's A Legendary Christmas with John and Chrissy special, alongside their family, loved ones and some very famous friends. Most notably, the pair's longtime friends, Kim Kardashian West and Kris Jenner will be making guest appearances to add a touch of glam to the special. As Keeping Up With the Kardashian fans know, Jenner herself throws a legendary holiday party every Christmas Eve, so if there's one guest who will be able to ensure that Legend's party is truly legendary, it's the KarJenner matriarch.

A Legendary Christmas will also feature appearances from The Voice judges Kelly Clarkson, Blake Shelton and Adam Levine, which should hopefully result in quite a few holiday duets. Legend will join The Voice for Season 16 as the reality competition's newest coach, when it returns for its spring season.

The star-studded cast will be rounded out by former Glee stars Jane Lynch and Darren Criss, Stevie Wonder and, most excitingly, the stars of Queer Eye. While it hasn't been revealed what, exactly the Fab Five — which includes Jonathan Van Ness, Tan France, Antoni Porowski, Karamo Brown and Bobby Berk — will get up to on A Legendary Christmas, it's probably a good idea to have some tissues on hand, in case things get as emotional as they often do on Queer Eye.

In addition to appearances from their celebrity guests, A Legendary Christmas with John and Chrissy will also feature performances from Legend, as he sings songs off of his recently-released holiday album. Teigen, meanwhile, will show off the hosting skills that she's honed over years of working on Lip Sync Battle, and will add some color commentary and jokes to the evening's events. (Here's hoping she also decides to showcase some of the recipes from her Cravings cookbooks, so that everyone can get a jump on their holiday baking.)

The couple's Christmas special will mark the second NBC television special that Legend has starred in this year; in April, he produced and starred in NBC's musical event, Jesus Christ Superstar Live in Concert, for which he won an Emmy Award in September. That award made Legend the first African-American man to achieve EGOT status, the prestigious career achievement that many consider to be the "grand slam" of the entertainment industry.

"Before tonight, only 12 people had won an Emmy, Grammy, Oscar and Tony in competitive categories," Legend captioned an Instagram post celebrating his Emmy win. "Sirs Andrew Lloyd Webber, Tim Rice and I joined that group when we won an Emmy for our production of their legendary show Jesus Christ Superstar. So happy to be part of this team. So honored they trusted me to play Jesus Christ. So amazed to be in such rarefied air."

Teigen, meanwhile, has had an exciting year of her own — in addition to welcoming son Miles Theodore, in May (the couple are also parents to daughter Luna, 2), the model and TV host also released her second, highly-anticipated cookbook, Cravings: Hungry For More in September. Teigen also collaborated with Target for her very own Cravings-inspired homewares collection, as well as launching her second collection with online retailer Revolve and a new makeup collection with Becca in October.

Honestly, it's a miracle that they've found time to host their own Christmas special on top of everything else!

A Legendary Christmas with John and Chrissy will kick off the holiday season on November 28, with a Christmas party that is guaranteed to be the most exciting (and star-studded) event of anyone's holiday season.

More like this
Kanye West Apologizes To Kim K "For Any Stress I Have Caused" In Rare Interview
By Jake Viswanath
Everything To Know About Taylor Swift’s 10th Studio Album, 'Midnights'
By Grace Wehniainen and Jake Viswanath
Is Dua Lipa Dating Trevor Noah? New Photos Show Them Kissing & Hugging
By Brian Anthony Hernandez and Martha Sorren
Twitter Is Freaking Out Over Rihanna’s 2023 Super Bowl Halftime Show Announcement
By Stephanie Topacio Long
Get Even More From Bustle — Sign Up For The Newsletter