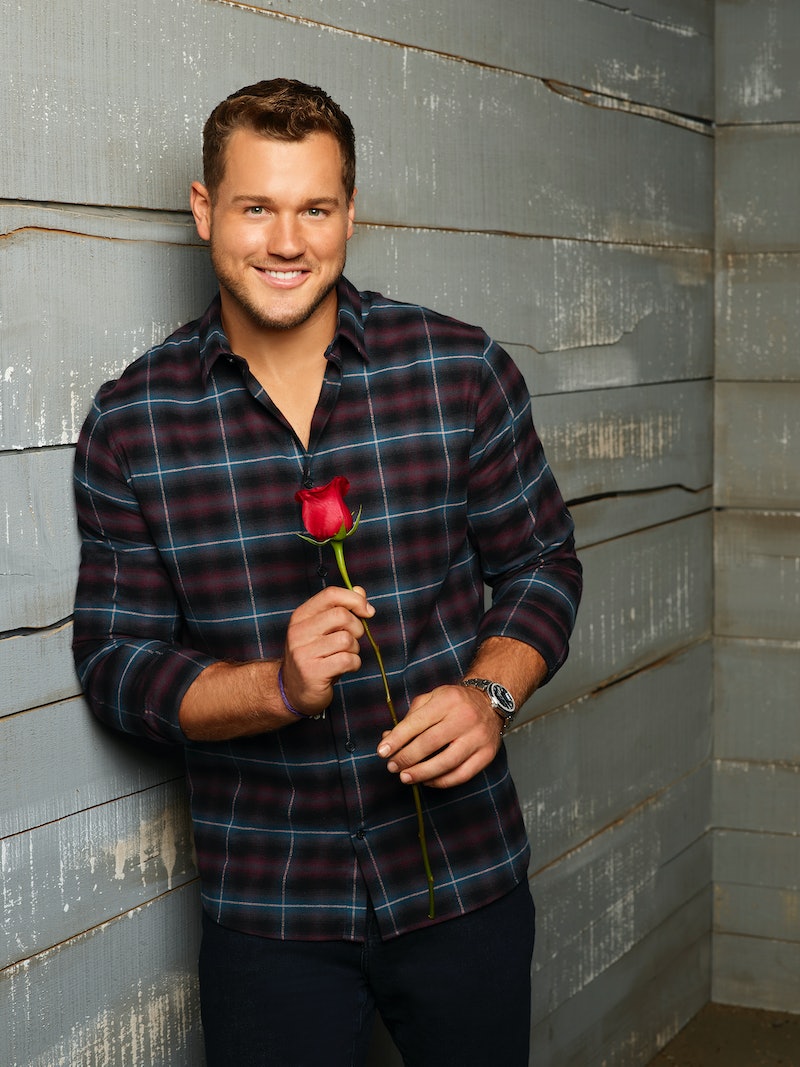 Starring in The Bachelor is a big deal. Sure, it comes with a lot of perks, but it also brings a lot of scrutiny. In a recent Instagram video, Colton Underwood made a bunch of jokes about himself, so now you don't have to. He addressed all of the elephants in the room in a hilarious way in the minute-long clip. Maybe we can finally move on from the past and just focus on these new Bachelor episodes now? OK, it's not likely, but Colton definitely did what he could do address the major talking points about his season.

With a dog by his side, Colton watched the post-limo comments from the premiere. He told the pup, "Oh, they make virgin jokes too. Quite a few of them." That's for sure. The girls discussed Colton's virginity and so did Bachelor host Chris Harrison. Colton even wondered aloud, "Do you think Chris Harrison realizes that I've already had the sex talk?" He probably does, but if it didn't happen in front of reality TV cameras, then it basically didn't happen. Or at least not to Bachelor Nation.

Then on cue, Colton played into the clueless persona that he's been unfairly pigeonholed into. The reality TV star told his dog, "You know on my poster where it says 'What does he have to lose?' I'm still trying to figure out what does that mean?" Obviously, Colton was just joking here. (Hopefully.)

Later in the video, Colton hilariously addressed the disappointment that some viewers had with his selection as the Bachelor. He asked, "Do you think some of the women signed up thinking it was going to be Blake [Horstmann] and Jason [Tartick]?" He even threw it back a bit to the prince who was promised, none other than Peter Kraus himself. The Bachelor that we should have had last season. Colton asked,

"Do you know who Peter is? Do you think that America will ever think I'm as good looking as him?"

Colton then asked, "Do you think I'll ever be as popular as Ben Higgins? I know, I know, I shouldn't think like that, but I just get in my head sometimes." No one can blame him. Ben has made so many appearances on the Bachelor franchise throughout the years. He definitely one of the most beloved alums in the franchise. That's a lot to live up to.

And then he addressed one of the most major elephants in the metaphorical room at the Bachelor mansion: "Do you think I'm still in the doghouse with Tia [Booth]? No? Yeah?" It's pretty interesting since Tia was not mentioned one time during the three-hour premiere, even though the fans were subjected to two seasons about their almost-romance. However, Tia has moved on with her own relationship, so she likely doesn't care about being omitted from Colton's personal narrative — or that whole Bachelor in Paradise breakup debacle. Tia even posted a supportive message about Colton's season on the day it premiered.

It's expected that every Bachelor lead is going to catch some flack. However, Colton has addressed the criticism more than once. Colton even sat down with Harrison during the season premiere. During the conversation, the host said, "You were a controversial choice."

Then, Colton admitted, "I mean, I would be lying if I said I didn't look at any of the negative reactions." He added, "Some of the comments, I can see where they come from. I get it." And he really does get it. Colton addressed all of the "concerns" that the fandom has about him being the Bachelor in this hilarious Instagram video. So can fans just move on already? It sure seems like Colton is ready to.