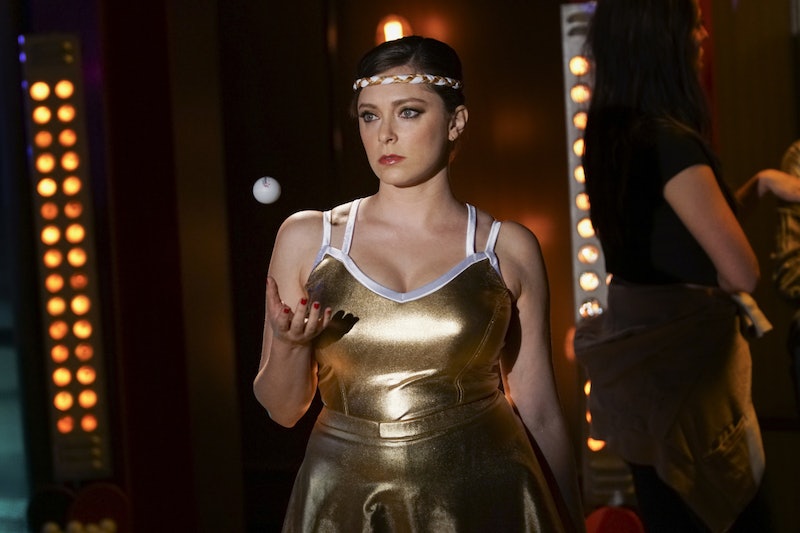 Move over, Walter White — there's a new antihero in town, and her name is Rebecca Bunch. The CW released three new Crazy Ex-Girlfriend Season 3 posters, and in each one, Rebecca takes on the persona of a famous antihero. First she rocks Mad Men's Don Draper's black suit, then she channels Breaking Bad's Walter, before finally settling into the role of one the most famous female antiheroes in movie history, Basic Instinct's Catherine Tramell.

That's a fitting sequence of characters for Rebecca to embody, since Season 3 is sure to be about the scorned lawyer channeling her rage after being left at the altar by Josh. For two seasons, Rebecca has been busy finding ways to fall in love. Her pursuit of Josh has been at the center of most of her actions, but much like how Don could never fully escape Dick Whitman, Rebecca is going to have to face her messy past.

In the Season 2 finale, it was revealed that Rebecca burned down the house of a married professor who didn't leave his wife for her. Afterward, she was institutionalized before moving to New York City. While fans knew that Rebecca was dealing with depression, the full extent of the mental health issues she's been battling was unclear until Josh called off their wedding. As a result, Season 3's Rebecca is sure to be more unpredictable and angrier than she has ever been before. And that's exciting if you love a good antihero.

Rebecca's belief that she's the hero of her own story has always felt fragile. She's never been above scheming and manipulating situations to get what she wants. While she hasn't reached Walter White levels of scary, she's never been the typical romantic leading lady. Sometimes it's hard to root for Rebecca, and if these Season 3 posters are any indication, then it's about to get even harder.

Female antiheroes remain rare on the TV landscape, despite the boom of morally questionable men that dominated the Golden Age of television. Shows like Good Behavior, Claws, and The Sinner allow lead female characters to engage in the kind of bad behavior usually reserved for men, but Rebecca stands out from the pack because she's embracing her antihero role on network television — a place where its far more unusual for women outside of Shondaland to walk such a fine moral line.

Seeing how Rebecca handles the aftermath of watching her happy ending disappear is sure to be a chaotic, messy experience. Ultimately, it could bring Rebecca closer to true happiness and the sense of self-acceptance she's been looking for in all the wrong places. The likelihood of her crushing a few people along the way is high.

In true Crazy Ex-Girlfriend fashion, there's humor in these posters as well. The show seems to be both paying homage to two of TV's most memorable antiheroes while also poking fun at the serious nature of the men. Rebecca has always been far more self-aware than the Walters and Dons of the world, and that self-awareness is expressed through song.

Of course, the most fitting poster has to be the one that pays tribute to Basic Instinct. Sharon Stone's Catherine is dangerous, calculating, and sexual — and there's no doubt that Rebecca can relate, whether she wants to admit it or not. Season 3 may find her owning her status as a femme fatale, and wearing the title of "dangerous woman" with pride.

When Crazy Ex-Girlfriend returns on Friday, Oct. 13, Rebecca may finally be ready to throw herself into the role of the antihero, proving once and for all that it can be good to be bad.