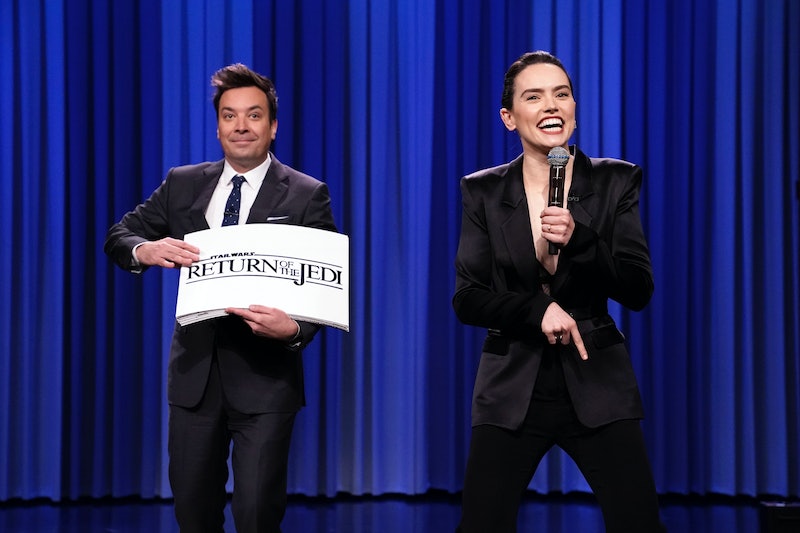 Sure, Rey's got the Force, but it turns out, she's got bars, too. Daisy Ridley rapped a Star Wars recap during a recent appearance on The Tonight Show with Jimmy Fallon, proving she's as good with a mic as she is with a lightsaber. The rap summed up all eight episodes of the Skywalker saga in less than three minutes. For those who need a Star Wars refresher, consider this required viewing before seeing Rise Of Skywalker, in theaters Dec. 20.

With a little help from Tonight Show host Jimmy Fallon as her hype man, Ridley, who previously rapped "Lady Marmalade" on the show, came to late night ready to drop a little Star Wars knowledge on Monday, Nov. 25.

She began, where else, but in a galaxy far, far away with a "guy named Vader" who "tried to kidnap a Rebel Princess Leia." Soon, Ridley was dropping rhymes about Han Solo's carbonite sleep, big baddie Palpatine, Rey's relationship with Luke, Jabba the Hut, and that famous gold two-piece. "Gotta admit that bikini was hot," Ridley rapped. She even confirmed what so many fans already knew: "Solo shoots first, don’t say that I’m wrong." Though, to be fair, not even Ridley would try and make heads or tails of the "McClunkey" addition to the Disney+ version of Episode 1. That's for a whole 'nother rap.

Ridley also turned Jar Jar Binks into a punchline ("I’m trying to think… Who’d I forget? What’s his name?") and showed some love for a shirt-less Kylo Ren. "Kylo is kind of a flirt," Ridley raps, perhaps, teasing that Rey and Kylo's relationship could be moving out of the frenemy zone. It's something Kylo Ren himself, Adam Driver teased in a recent Entertainment Weekly interview in which he called their relationship "intimate."

But the ins and outs of Rey and Kylo's relationship will have to be the subject of a different rap. Or, maybe a slow jam depending on their intimacy level in Rise Of Skywalker.

Unfortunately, Baby Yoda didn't get a shoutout in this particular rap since Disney+'s new series The Mandalorian is not movie canon. But, the tiny Force-sensitive green guy's name was on the tip of Ridley's tongue when, during her interview with Fallon, the actor declared that Baby Yoda is the cutest Star Wars creature.

"Baby Yoda," she answered when asked if he was cuter than the porgs, those furry little bird-like creatures that turned up in The Last Jedi. And then Ridley dropped a bomb.

"Look, I'm not a big fan of the porgs," she said. "We worked for six months on The Last Jedi and in every interview, 'What about the porgs?' The porgs were there for a day."

So, yes Ridley is #TeamBabyYoda and she will not be taking anymore questions about those lazy porgs, thanks.