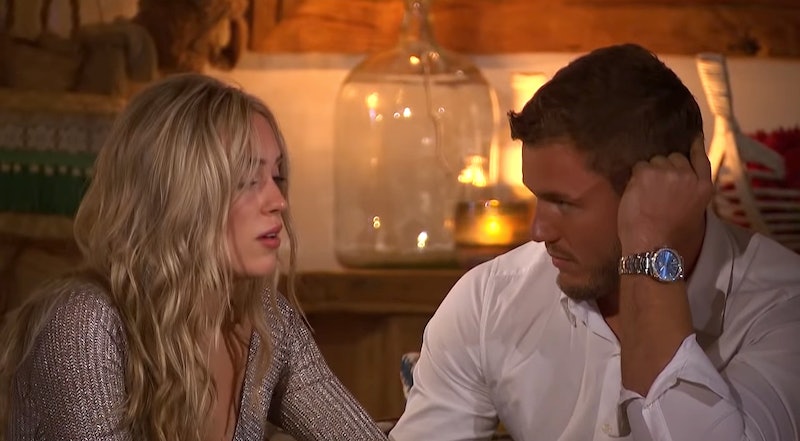 Bachelor fans knew something very dramatic had to prompt Colton's long-anticipated fence jump and now everyone knows that it was Cassie's decision to leave during their fantasy suite date broke Colton's heart. With the finale looming, the big question now is if Colton and Cassie still talk after The Bachelor. Colton admitted during their breakup that he was going to pick Cassie instead of Tayshia and Hannah G. and he made it clear that he was willing to wait for her. Due to everything he said about his feelings, there doesn't really seem to be a way that Colton could end up with Tayshia or Hannah G. during the finale. With four hours to fill over two nights, it seems likely that Cassie and Colton will interact at least once more following their Bachelor split.

Colton is understandably pretty devastated on The Bachelor since Cassie chose to go home. But she expressed love for him right before she exited the show. And her main reason for leaving seemed to be that she couldn't commit to an engagement by the end of filming.

So while she clearly doesn't feel as strongly for him as he does for her, there could possibly be a glimmer of hope for these two. And even if they don't ever connect romantically again, The Bachelor will probably orchestrate something during the finale that makes these two come face to face.

Besides whatever The Bachelor has up its reality TV sleeve for the two-night finale, you can also look into what these two have been up to outside of the show. One of the best ways to get some clues about their post-Bachelor relationship is to look at their social media interactions. Cassie follows Colton on both Twitter and Instagram, but he doesn't return the favor on either platform. That's most likely because Colton is the Bachelor and if he followed only a select number of contestants, that could potentially lead to spoilers. (Although, Colton hasn't been shy recently about liking former contestant Demi's tweets — but that may be because she's no longer in the running for his affections.)

While Colton hasn't been engaging in any of Cassie's tweets, she has been interacting with his. If you look at her likes on Twitter, you'll see she has clicked the heart on a number of Colton's tweets. She even liked his Valentine's Day tweet that said "Happy V Day," which could simply be because she liked it or thought the potential virgin allusion was amusing — or it could be because she and Colton had some sort of Valentine's Day connection. Most recently, she liked and retweeted Colton's message about how hard it was to watch their breakup when it aired on March 4 and then she shared some of her own thoughts on the situation.

It Was Hard To Watch

Meanwhile, one of the only tweets that Colton has liked on Twitter about Cassie comes from his friend Patti Murin, who is the star of Broadway's Frozen. Cassie's sister Michelle Randolph is an actor and Murin made a joke that the hometown date was beneficial for her career. What's particularly interesting is that Cassie has also liked a number of Murin's tweets. As Murin and Colton are buddies, could that mean that Cassie and Colton are still involved with each other?

Another more solid sign that Cassie and Colton are not only talking, but perhaps even seeing each other, comes courtesy of Cassie's sister. Michelle is dating actor Gregg Sulkin and Colton was spotted leaving a California gym with Sulkin on Feb. 28. Sure, Colton could have become pals with Sulkin after meeting Cassie's family during hometowns. But it seems far more likely that Colton was hanging with the Marvel's Runaways and Wizards of Waverly Place actor because they both are currently romantically linked with the sisters.

If Cassie really isn't interested in pursuing a relationship with Colton, she absolutely shouldn't be forced or pressured to come back on the show. But based on these additional hints, it just may be possible that these two have reconciled after their breakup. And rather than rush into engagement, maybe they are taking it slow and seeing what dating outside of The Bachelor is like. But all this is simply speculation and thankfully, the truth of Colton and Cassie's relationship status will be revealed during The Bachelor two-night finale.