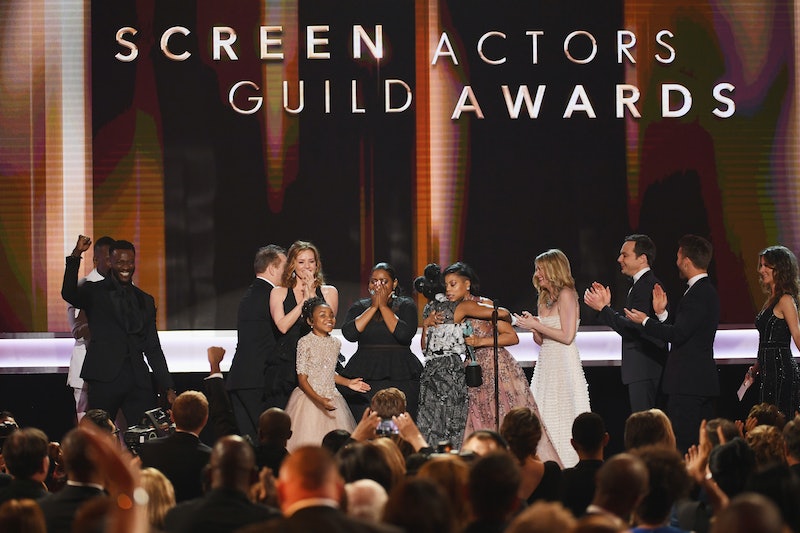 There are several important stops along the way to Oscar night; other ceremonies that give contenders a chance to grab the spotlight and practice their speeches before the Academy Awards. These ceremonies include the Golden Globes, the BAFTAs, and the SAG Awards. But do the SAG Awards predict the Oscars? Can moviegoers confidently use them as a barometer for future Oscar success, or is that a risky endeavor?

For those following the Oscar race for the first time, SAG stands for the Screen Actors Guild, and it's one of the industry unions that hands out awards in the weeks leading up to the Oscars, also including the Producers Guild (PGA), Directors Guild (DGA), Writers Guild (WGA), and more. The reason these guilds are important as precursors is because they're comprised of actual people involved in the making of films, many of whom also overlap in membership with the Academy of Motion Picture Arts and Science… as opposed to the Golden Globes or the Critics Choice Awards, which are handed out by journalists and critics, none of whom are members of the Academy.

So while the Globes can often go their own way — picking Avatar over The Hurt Locker or Boyhood over Birdman, for example — the guilds are typically a much better barometer of what will emerge victorious on Oscar Sunday. But they're not infallible, so it's not necessarily wise to blindly fill out your ballot with whatever SAG ends up picking.

2018 is an especially unpredictable one for SAG thanks to a quirk of scheduling. The Oscars are taking place about a week later than usual this year in order to accommodate the Winter Olympics, which means the nominations announcement is also a bit more delayed than normal. So when the SAG Awards are handed out on Sunday, Jan. 21, no one will even know who's nominated for an Oscar yet; the Academy's nominations won't be unveiled until Tuesday, Jan. 23.

This is one of only a small handful of times in the 24-year history of SAG in which the schedule has lined up this way, and it means that, hypothetically, an actor could win an award at SAG on Sunday and then not even get nominated for an Oscar two days later. (Usually, SAG would be loathe to give a trophy to someone who's not even in the running for an Oscar — unless they could be perceived as making a statement, like when they gave their Best Supporting Actor prize to Beasts Of No Nation's Idris Elba, whose outrageous snub by the Academy precipitated the first year of #OscarsSoWhite backlash.)

So the first question is, how accurately will SAG predict the 20 actors whose names will be called when the Oscar nominations are announced on Jan. 23? Over the past 23 years, the number of SAG nominees who have gone on to repeat at the Oscars has averaged at 15.9 out of 20 each year, with the worst matchup being 13 out of 20 (on three occasions), and the best being 19 out of 20 (on two occasions). That means, on average, you can expect four SAG nominees to miss out on an Oscar nod in favor of a dark horse contender.

Which four might those be this year? According to the odds on Gold Derby, it's fairly easy to see which SAG nominees are the most vulnerable. Best Actor nominee Denzel Washington (Roman J. Israel, Esq.) seems likely to lose out to Daniel Day-Lewis (Phantom Thread); Best Actress nominee Judi Dench (Victoria & Abdul) to Meryl Streep (The Post); Supporting Actor nominee Steve Carell (Battle Of The Sexes) to either Armie Hammer (Call Me By Your Name) or Christopher Plummer (All The Money In The World); and either Supporting Actress nominees Mary J. Blige (Mudbound) or Hong Chau (Downsizing) to Octavia Spencer (The Shape Of Water).

And what about SAG's big prize, the coveted Best Ensemble award? Over the 22 years that award has existed, the number of nominees that have gone on to recognition in the top category at the Oscars has averaged at 3.5 out of 5. So while Ensemble contenders Get Out, Lady Bird, and Three Billboards Outside Ebbing, Missouri are virtual locks for Best Picture nominations, it seems almost certain that Mudbound will miss out like previous Netflix SAG nominee Beasts Of No Nation, while the fate of Amazon's The Big Sick hangs in the balance.

Now let's talk winners. When it comes to forecasting which actors will eventually take home trophies at the Oscars, SAG averages 2.9 out of four winners correct per year, with the worst matchup being one out of four (which happened twice) and with SAG going four-for-four six times in 23 years. That means, on average, you can expect one SAG winner to miss out on an Oscar in favor of a close competitor. (However, it should be noted that most of SAG's weakest years in terms of lining up with the Oscars took place in the first 10 years of the ceremony's existence, and it hasn't gotten more than one winner wrong in the last 10 years, meaning its average is getting better over time.)

The Best Actor category is SAG's strongest, correctly predicting the eventual Oscar winner 18 out of 23 times. It also boasts one of the longest streaks; before SAG broke it by picking Denzel Washington over Oscar winner Casey Affleck last year, SAG had accurately forecasted the Best Actor Oscar winner 12 years in a row, with Johnny Depp for 2003's Pirates Of The Caribbean being the last anomaly. Best Actress is close behind in prediction strength, with 17 out of 23 winners going on to repeat at the Oscars, and Supporting Actress is close behind that, with 16 out of 23 corresponding winners. Best Supporting Actor has the weakest correlation between the SAG Awards and the Oscars, with only 14 out of 23 winners matching up between the two ceremonies; so if you're predicting one outlier between the two ceremonies this year, that is the smartest category to place it in, statistically speaking.

Things get much more dicey if you're looking to SAG's Best Ensemble prize to predict Oscar's Best Picture winner. In the 22 years that award has been handed out, it has matched up with the Academy's top category only 11 times — so it's literally a 50/50 chance. You might as well toss a coin. (SAG Ensemble winners who lost the Oscar include Little Miss Sunshine, Inglourious Basterds, The Help, American Hustle, and last year's Hidden Figures.)

However, you do typically have to at least be nominated for SAG's Ensemble prize to win Best Picture at the Oscars; the only film to emerge victorious with the Academy without first being recognized by SAG is 1995's Braveheart… in the very first year the Ensemble category existed. (Last year, notorious Oscar loser La La Land wasn't nominated for Best Ensemble, while underdog winner Moonlight was.) That could mean very good things for Ensemble nominees Get Out, Lady Bird, or Three Billboards.

Is one of those three movies our eventual Best Picture victor? How many of SAG's winners will repeat at the Oscars? Finds out when the SAG Awards air on Sunday, Jan. 23 — and when the Oscars are broadcast on Sunday, March 4.