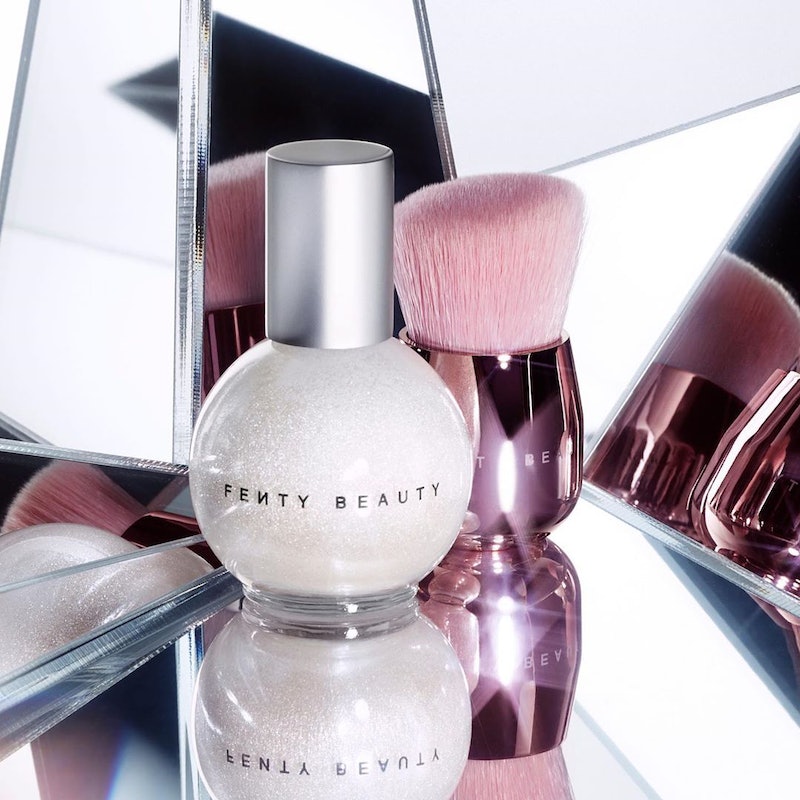 Get ready to glow because Rihanna is blessing beauty lovers again. Fenty Beauty's Diamond Bomb now comes as a liquid highlight. That's not all, though. The sparkling, gem-inspired product is also getting a pink-toned sister shade. If you've been on the hunt for your next favorite highlighter, Rihanna just delivered.

The liquid Diamond Bomb is still the same shade as the original highlighter favorite. The new product, however, comes in a roll-on formula that can be buffed into the skin with the brand's kabuki brush. In the post, Fenty Beauty explains that the new formula is meant for getting that glow on the go, and yes, it can be used on both your face and body.

As for Diamond Bomb's new pink sister shade, the highlight comes in powder form only and is aptly named Diamond Bomb II. The hue is just as shimmering as the original, but the new version features a holographic pink color while the original is all sheer, diamond-like sparkle.

The brand has been known for its highlighters since its inception in 2017. Rihanna's bright, golden Trophy Wife highlighter made waves when the brand first launched. It was such a major success that the mogul not only created a special edition for her 30th birthday, but she also recreated the shade in her Fenty Body Lava formula.

Rihanna has also used her beauty brand's glow-creating goods for charitable causes. In 2018, Fenty Beauty launched the Diamond Ball-Out silver highlight, with 100% of the proceeds from the shade donated to the Clara Lionel Foundation. The organization, which was founded by Rihanna, was created in honor of her grandparents and helps to provide education and healthcare to impoverished communities worldwide.

Fenty Beauty has expanded by leaps and bounds since its 2017 beginnings. In just the past few months alone, Rihanna's makeup brand launched eyebrow products, a new hydrating foundation and primer, and new shades in its shimmering Match Stix.

Rihanna may have a luxury fashion label, a lingerie brand, and Fenty Beauty to look after, but she doesn't seem to be slowing down any time soon. If you're a member of the Navy, that's the best news of the day.