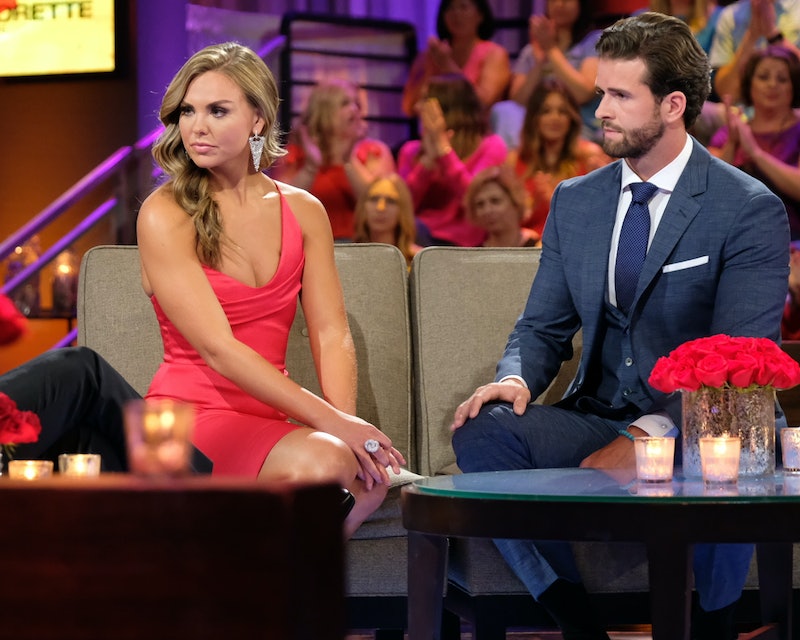 If a certain musician looking for love on The Bachelor: Listen To Your Heart reminded you of one Bachelor Nation alumnus in particular, well, you're not alone. While watching the premiere episode of the franchise's latest spinoff, Hannah Brown tweeted that she was "triggered" by Listen to Your Heart and the similarities between one of the contestants and her former fiancé, Jed Wyatt. And she wasn't the only one.

The former beauty queen chose aspiring musician Jed during the finale of her Bachelorette season, only to discover soon after their engagement that he secretly had a girlfriend during his time on the show. So, naturally, when one of the first contestants to be introduced on the series — former American Idol contestant and potential villain, Trevor Holmes — bore a striking resemblance to Jed, Hannah couldn't help but comment on the similarities. "I’m triggered by this whole thing," Hannah wrote on Twitter, along with a gif from her breakup conversation with Jed.

Hannah wasn't the only one who noticed Trevor's resemblance to Jed; the country singer himself even tweeted about Listen to Your Heart and the fact that it seemed to be directly inspired by his run on The Bachelorette. "Something about this new show feels familiar," Jed wrote on Twitter during the premiere, calling out Trevor's sheepskin jacket in particular. "Maybe it’s Trevor’s jacket, maybe it’s all the guitars. Stay tuned."

Hannah's runner-up, Tyler Cameron, also couldn't help but troll Jed on social media during the Listen to Your Heart premiere. "They should give Jed producer credits because he is definitely the creative idea for this show," he wrote on Twitter, referencing his fellow contestant's frequent Bachelorette serenades. "What we have learned these past few seasons is that a guitar can get you past anything," Tyler added in another post.

However, it was his tweets about Trevor that really drew a comparison between Jed and the contestants on the show: "We've seen how this whole look turns out already..." Tyler wrote, alongside a photo of Trevor wearing his sheepskin jacket and playing the guitar. Later, when Jamie chose Trevor over her other suitor, Ryan, the Florida native tweeted out a warning to the aspiring singer. "Jamie obviously didn't watch the Bachelorette and doesn't understand what comes with that jacket," Tyler wrote.

Tyler's social media references to Jed make sense, considering Hannah famously chose the musician over him during the final episodes of The Bachelorette, even though Jed admitted he only came on the reality show to promote his music career. However, after learning about Jed's secret relationship, Hannah quickly ended their engagement and asked Tyler out on a date during the After the Final Rose special. While things appeared to fizzle out between them soon afterwards — and Tyler soon began dating Gigi Hadid — the pair have recently reconnected and spent a month together in Florida as part of a "Quarantine Crew."

Despite Tyler's — and all of Bachelor Nation's — jokes about Jed inspiring Listen to Your Hear, host Chris Harrison told Good Morning America that the show was actually inspired by Lady Gaga and Bradley Cooper's Oscars performance. "It really came out of A Star Is Born meets The Bachelor," he said, adding that producers wanted to "create this amazing relationship that’s also an incredible duet." So while Jed may not have inspired the show itself, he's clearly going to be on everyone's minds as Bachelor Nation watches to see if any of these musicians can make beautiful music together. Look out for the wolf in the sherpa-lined jacket, ladies.

More like this
'Bachelorette' Vet Clare Crawley Revealed Her Stunning Wedding Photos
By Stephanie Topacio Long
Hannah Ann Got Engaged 3 Years After 'The Bachelor' & The Proposal Was Dreamy
By Grace Wehniainen
'Bachelorette' Vet Clare Crawley Unveiled 2 Special Wedding Day Accessories
By Stephanie Topacio Long
10 Photos Of The Wildest Limo Arrivals From 'The Bachelor' Premiere
By Brad Witter
Get Even More From Bustle — Sign Up For The Newsletter
From hair trends to relationship advice, our daily newsletter has everything you need to sound like a person who’s on TikTok, even if you aren’t.