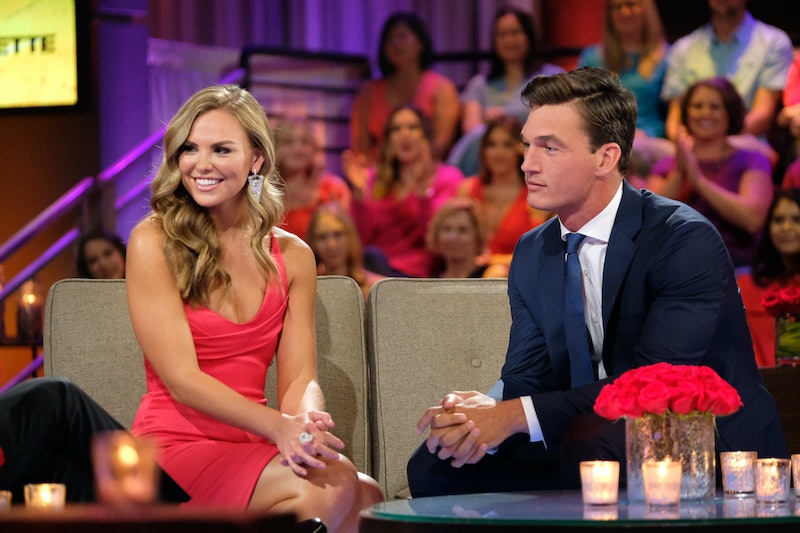 About a month after The Bachelorette ended, Hannah Brown is reliving all of the drama that went along with her reality TV journey. As Us Weekly noted, Hannah even joked about Tyler, Jed, and The Bachelorette drama in a light-hearted video that proves that she's not going to hold a grudge against any of the involved parties for how everything turned out.

Hannah got to try her hand at Cosmopolitan's Expensive Taste Test, as seen in a video the publication published on Aug. 29. During the segment, the Bachelorette tried to decipher which items (such as red wine, cheese, and face moisturizer) were the more expensive ones of the bunch. When the Dancing with the Stars competitor sampled some expensive and not-so-expensive champagne, the conversation turned to the major, Bachelorette-adjacent relationship updates in the reality star's life.

The always-bubbly Hannah couldn't help smile as she recounted the end of her Bachelorette journey, proving that she's not just moving on past any of the drama but she's doing so without holding anything against either Jed or Tyler.

If you followed Hannah's Bachelorette journey, you would know exactly what the reality star was referencing with her above (light-hearted) questions. At the end of her season, the lead chose Jed to receive her final rose. But, shortly after the pair got engaged, Hannah learned (as the rest of the world did) that Jed had been seeing someone back home named Haley Stevens when he came on the show, thanks to a report from People. Jed denied that she was his girlfriend, despite the fact that they exchanging "I love you's" and went on multiple vacations together. Hannah subsequently split from her fiancé after hearing the heartbreaking news.

Following that update, and as seen on the ATFR special, Hannah asked runner-up Tyler if he wanted to grab a drink with her sometime. According to TMZ, the pair did indeed have a hangout session, as the Florida native was spotted leaving the Bachelorette's apartment on Aug. 2. Of course, as she hinted in her interview with Cosmo, Tyler has been seeing Gigi Hadid as of late. The two models have been spotted hanging out together on numerous occasions ever since they reportedly met up at Soho House on Aug. 4, less than a week after Tyler's get-together with Hannah.

Even though things may not have worked out for her on The Bachelorette, Hannah has clearly moved on. Between hanging out with some of her besties to appearing on the ABC series Dancing With the Stars, the former pageant queen has so many fun things on her plate at the moment and is simply too busy living her best life to care about any relationship drama.