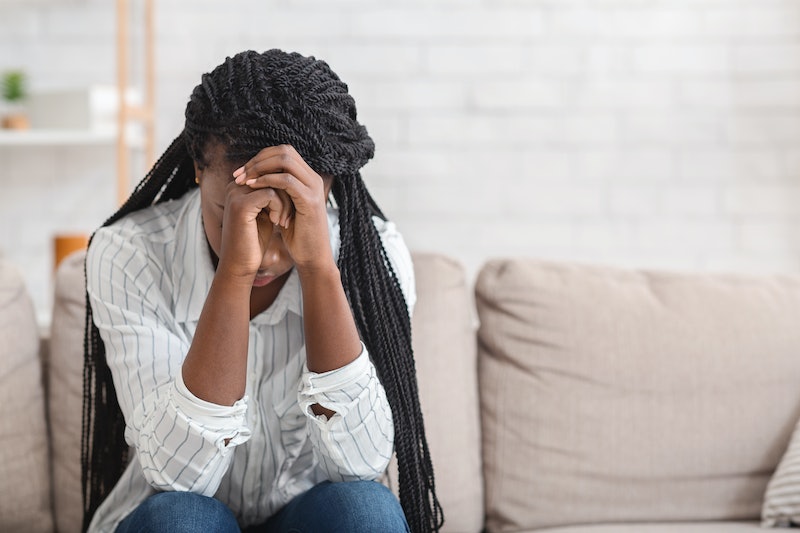 Going through a breakup is undeniably difficult, but especially so when you're trying to get over a long-term relationship. You've had years to develop a routine that revolves, in may ways, around this one person. And once that comes to an end, it can prove to be quite a shock to the system.

In the first few weeks following the breakup, you might not even know what to do with yourself. From waking up, to going to bed, to figuring out where to go on the weekend, it can all feel like unchartered territory. Doing it alone — and realizing a chapter of your life has come to a close — can be disorienting and upsetting, so it's only natural to wonder if you'll ever be able to move on.

While it may not seem possible at first, the good news is you will adjust and you will eventually feel better. But it can be tough to say exactly when that'll happen. "Getting over a long-term relationship varies from person to person," Dr. Tiffany C. Brown, PsyD, CAMS-II, a doctor of clinical forensic psychology and a family counselor, tells Bustle. And it'll depend on quite a few factors, including how the relationship ended.

"If the couple grew apart or the relationship ended amicably," Brown says, "the grief process probably started prior to the actual end of the relationship and people are able to move on faster." This might be the case if you saw the breakup coming a mile away, or if you were having problems and knew it would have to end eventually.

When that's the case, the end of the relationship can even bring a sense of relief, and you may find yourself bouncing back fairly quickly. If the breakup was a surprise, though, it won't be so easy. "Someone who was blindsided by [a breakup] may go through denial that the relationship is over, anger that it ended without their input or an actual resolution, a period of depression about the state of the relationship or lack thereof, and finally acceptance," Brown says.

In this instance, overcoming a breakup can have the same ups and downs as any other grieving process. And it can be a long and complicated process. It's OK, though, to "give yourself time to experience all the stages of grief as you mourn the loss of the relationship," Alisha Powell, PhD, LCSW, a therapist and social worker, tells Bustle. "People grieve in different ways and it's normal to experience anger, denial, sadness, and a myriad of mixed emotions through the process."

How you feel about your ex, as well as what you're doing in order to move on, can also shorten or lengthen the process. So if it's been months since the relationship ended and you're still out of sorts, don't worry. "Recognize that it will not be an easy process," Powell says. "We are built for relationships as humans and the loss of a close relationship can be devastating and make us questions ourselves."

There are, however, a few ways to speed up the process. And one of the best things you can do for yourself is go "no contact," Chris Seiter, a relationship specialist and breakup consultant, tells Bustle. Texting them or seeing what they're up to on social media can leave you stuck in the past, so focus on yourself instead, and do what makes you happy. This might mean hanging out with friends and loved ones, Seiter says, picking up a new hobby, exercising — or whatever else makes you feel good.

Once you're ready, "dating is also something that helps some people," Seiter says, "not to get into a new relationship but just to get to know new people and know that their ex is not the end of their love life." If you're having a tough time getting over a long-term relationship, though, don't hesitate to reach out for help.

"Healing takes as long as it needs to take," Brown says. "However, if someone is stuck wondering why the relationship ended, what they could have done differently, blaming themselves, blaming the other party, chronically depressed, or they are unable to function in daily life, it is time to seek support from friends and family and a mental health professional." They can give you the support you need to better process the situation, and help you to officially move on.