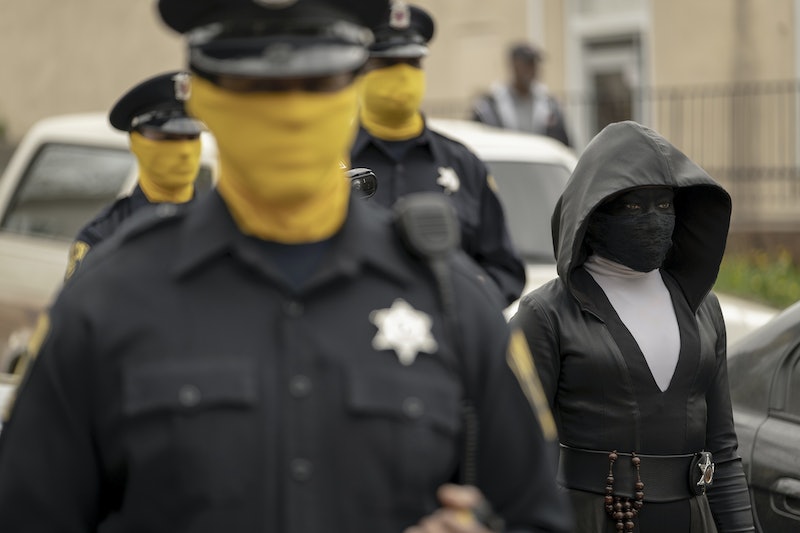 Spoilers ahead for HBO's Watchmen. Like the comic it derives from, HBO's Watchmen is set in an alternate history. Yet, the Watchmen series takes place 30 years in the future from the comic. The main action of the comic was set in 1985 while the TV show's interpretation investigates what the alternate reality established by Alan Moore and Dave Gibbons looks like in an alternate 2019.

Even though Watchmen is set in a made-up universe, real-life historical events are featured in the series — like the Tulsa massacre from 1921 and the German World War I propaganda flyers directed at African American soldiers. But a lot of the history featured in the series was established in the graphic novel published from 1986-1987. In the comic, masked superheroes used to be prevalent, but were outlawed in 1977 through the Keene Act. One of those superheroes, Doctor Manhattan — the only one to possess actual superpowers — had previously helped the U.S. win the Vietnam War (which helps explain how Angela Abar grew up in the U.S. state of Vietnam). The 22nd Amendment was also repealed, leading to President Richard Nixon serving as president in 1985 after being elected in 1968.

But a lot changes in 34 years, so here's how HBO's Watchmen used the comic's history to establish its alternate universe.

Forget Ronald Reagan — the actor who became president in Watchmen is Robert Redford following Gerald Ford (who followed Nixon) as Commander in Chief. Running against the long-tenured President Redford in 2020 is Senator Joe Keene — the son of the senator who came up with the Keene Act that prohibited "costumed adventuring."

Other notable people within the U.S. political system include author John Grisham, who is a justice on the Supreme Court. (A newspaper in the third episode stated he plans to retire.) And historian Henry Louis Gates, Jr. is the U.S. Treasury Secretary and he virtually greeted Angela at a Greenwood Center for Cultural Heritage kiosk.

Refordations are a hot topic in the political landscape of Watchmen. Similar to the concept of reparations for slavery, President Redford passed the Victims of Racial Violence Act which provides compensation in the form of tax breaks to victims of the Tulsa race massacre and their direct descendants. According to the supplemental documents provided by HBO in the Peteypedia, Johnnie Cochran fought for these reparations in court. Unfortunately, the FBI noted during the third episode that the white supremacist group the Seventh Kalvary formed in response.

The Seventh Kalvary's terrorism in Tulsa led to another prominent law — the Defense of Police Act (DOPA). DOPA allows the police force to wear yellow masks and other costumes to hide their identities. The act was passed after the Seventh Kalvary's White Night attack on the Tulsa police. Although three years have passed since the White Night, Tulsa is still the only major U.S. city to use this form of protection. Although Senator Keene Jr. (who is responsible for the act) told Laurie Blake that Atlanta, New Orleans, and Denver are looking to pilot DOPA.

In the comic, the original crew of superheroes who were revered by the public was the Minutemen in the 1940s. In 2019, a popular TV show — American Hero Story — pays tribute to them. The next generation of vigilantes were the characters central to the comic story and two have them have popped up in the TV series — Laurie Blake (Silk Spectre II) and Adrian Veidt (Ozymandias). Silk Spectre II and Ozymandias were superheroes at the same time as Dan Dreiberg (Nite Owl II — Laurie's eventual lover), Eddie Blake (the Comedian — Laurie's secret father), Walter Kovacs (Rorschach — whose mask the Seventh Kalvary uses), Nelson Gardner (Captain Metropolis — who was also part of the Minutemen), and Dr. Manhattan (Laurie's ex-boyfriend).

Dr. Manhattan is still living on Mars as he was in the comics. But on the TV series, Laurie can leave him voice messages thanks to technology by Trieu — the company that purchased Veidt's. Her other lover, Dan, is in prison. In the Peteypedia files, Agent Petey wrote that Dan and Laurie were arrested in 1995 for breaking the Keene Act. While Dan continues to serve prison time, Laurie now works for the FBI in the Anti-Vigilante Task Force. As her introduction highlighted, people are still engaging vigilantism inspired by these original superheroes.

As for Veidt, he is seemingly being held captive somewhere while everyone believes he is dead. Yet, his previous actions continue to influence the world in 2019. Squids rain from the sky — an unexplained phenomenon that appears to be a continuation of Veidt's deadly hoax from the comics. To stop a nuclear holocaust and World War III, Veidt created a squid-like creature to fall in New York City. The squid killed three million people. But because it was believed to be an alien attack, humanity stopped fighting one another and now live in fear of another extraterrestrial attack.

The people in the year 2019 in Watchmen may not have cell phones (hey, they have other technical marvels). But what really differentiates the show from real-life is the political landscape and long history of superheroes. Even in an "alternate history" with "costumed adventurers," the parallels to the real 2019 are present, just as they were in the comics.