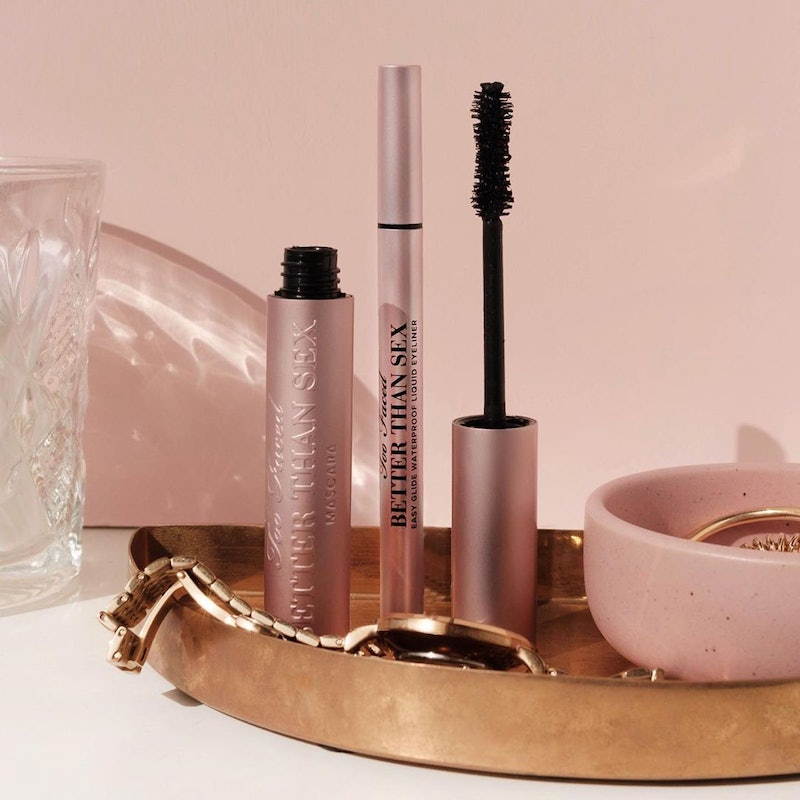 Hold on to your deal loving seats, beauty fans. There's a massive sale going on right now on one of makeup's most famous products, and you're not going to want to miss it. HSN's Too Faced Better Than Sex Mascara deal is about to go live, and it'll get your not one, not two, not even three, but four mascaras for just $39. Grab your wallet and get ready to head to HSN for this massive deal.

According to the shopping network, the iconic Too Faced Better Than Sex Mascara will be on sale in a massive deal beginning Saturday, July 27. What's so special about the deal, though? Fans of Too Faced and its famous lash enhancer will get two full sized original Better Than Sex Mascaras as well as two deluxe sizes of the product in the original formula and the waterproof version. The collection of all four tubes will retail for just $39. If you were to shop them seperately, you'd be spending a whopping $76. Basically, you're getting four mascaras for half price thanks to the HSN deal.

If you want to snag the massive discount on this classic product, though, you'll need to act soon. According to HSN, the Better Than Sex sale will only last until July 31.

While Too Faced may have just added a new member to its mascara family with its Damn Girl launch, Better Than Sex is still one of the brand's most iconic products. In fact, the volumizing mascara is one of Pinterest's most pinned makeup items, and it holds the title of best selling prestige mascara on the market. The item is so popular that Too Faced even launched an entire vault dedicated to the lash amplifier with its holiday collection back in September 2018. Then, in March of this year, Too Faced launched its Better Than Sex eyeliner, a new take on the classic mascara. Clearly, this product is a must-have.

If the HSN Better Than Sex deal will be your first time shopping the network, you may want to rethink where you're sourcing your beauty deals. While the shopping network has previously had a reputation of being for an older audience, that's no longer the case. HSN is crushing it when it comes to deals for beauty lovers.

Back in March, HSN hosted its Best in Beauty event, a sale that could rival even Sephora's VIB deals. For Best in Beauty, HSN featured five days of deal on major brands like Beauty Blender, Beauty Bio, Smashbox, and Benefit. Yes, HSN does carry those brands, and yes, you should be shopping them there.

If you haven't shopped HSN before and love the Too Faced Better Than Sex Mascara, now is your time to start buying from the network (and at a major discount). With four mascaras for just $39 beginning July 27 and going until July 31, it's definitely time to stock up on your supply. While you're there, maybe take a look around HSN's offerings because no one wants to miss a beauty deal.