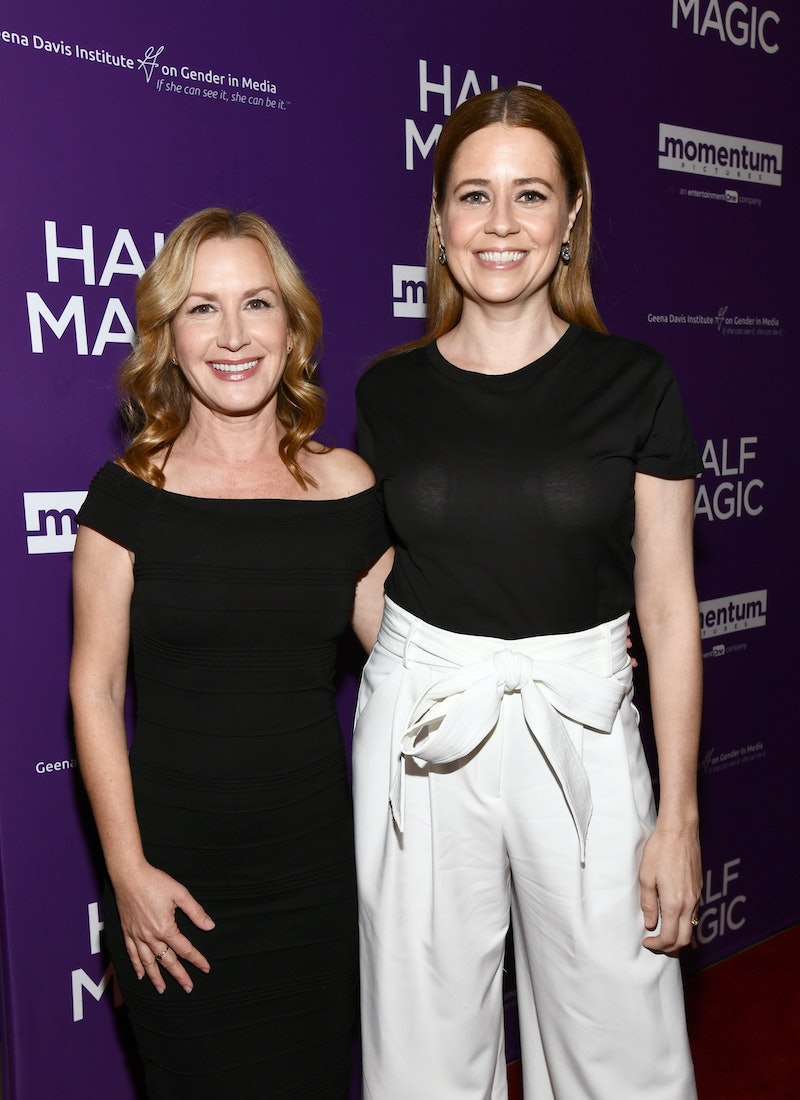 Angela and Pam from The Office are working together again — but they're trading the paper business for podcasts. Actors Jenna Fischer and Angela Kinsey just launched their podcast, Office Ladies, and the content is so good that Fischer and Kinsey now want an Office reboot. The actors revealed the news in an interview with the New York Times published on Oct. 15, in which they admitted that revisiting each episode in their podcast has convinced them that they're ready to return to their old Dunder Mifflin stomping grounds.

"People have been pestering me about a reboot," Fischer told the Times. "And I would say, 'Oh, I think it’s just perfect as it is.' But now that I’m rewatching it and reliving all the memories of what it was like to work together, I’m the one pestering everybody for a reboot." Kinsey agreed with her real-life best friend by adding, "We know we might not be able to get everyone for a traditional reboot, but we will take a reunion movie."

On Office Ladies, Fischer and Kinsey will be reviewing Office episodes in the order they aired, revealing behind-the-scenes information and pointing out details fans might have missed. If the podcast, which premiered on Oct. 16 with a discussion about the pilot, is a success, the two might even make it to the series finale — episode 201.

Both Fischer and Kinsey previously said they were open to a reboot, but under certain conditions. Kinsey told Bustle in November of 2018 that she was "so on board," but only if co-creator Greg Daniels and the entire cast were attached to the project. Kinsey also made it clear that the reunion would "complement" The Office and not recreate it entirely.

In January of that same year, Fischer spoke about a potential reboot with The Hollywood Reporter. She called it a "great idea," but, echoing Kinsey, said Daniels would have to be in charge. "We just have to get Mindy [Kaling], B.J. Novak, Gene Stupnitsky, and Lee Eisenberg, Mike Schur to write some episodes," Fischer also said. "That show was so great because of the talent involved behind the scenes, not just on the screen."

Many other cast members have expressed interest in a reboot, including John Krasinski and Ellie Kemper. However, Steve Carell prefers to leave The Office alone, mainly because he's not sure the comedy would be accepted today like it was 10 years ago. "The climate’s different," Carell said. "I mean, the whole idea of that character, Michael Scott, so much of it was predicated on inappropriate behavior." But, an Office revival could one day show up on NBC's new streaming service, Peacock, which launches in April 2020. And, NBCU's Chairman of Direct-to-Consumer and Digital Enterprises Bonnie Hammer told Deadline in September, "It is my hope and goal that we do an Office reboot."

Whatever happens, at least fans can listen to Office Ladies and revisit each episode with Fischer and Kinsey's unique perspective and own personal touch. Plus, certain episodes will even feature cast members and crew. As Fischer and Kinsey informed the Times, Rainn Wilson, aka Dwight Schrute, phoned in during their third episode. So, really if you think about it, Office Ladies is essentially a mini-reboot.