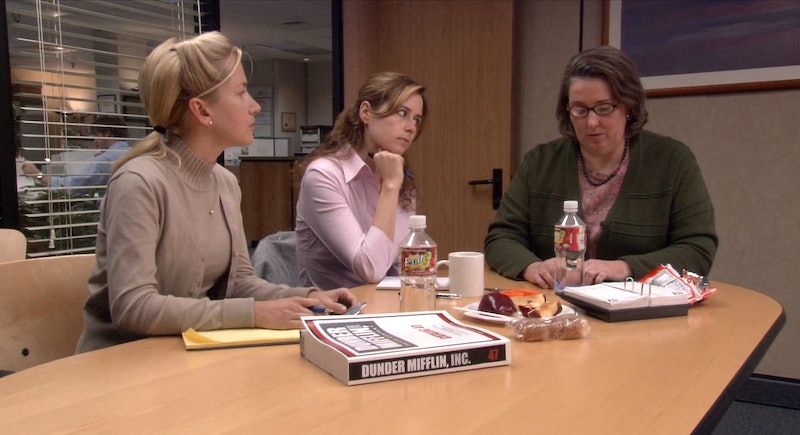 The Party Planning Committee notably had their differences over the course of The Office's run. But Pam, Angela, and Phyllis are getting along just fine now. Jenna Fischer posted a photo of The Office Party Planning Committee reunited in honor of #WomanCrushWednesday. Fischer is joined by Angela Kinsey and Phyllis Smith in the pic where they show that the days of their arguments over their vastly different party planning styles are long gone. Besides it being delightful to see Michael's "party planning biatches" bonding, the photo might also make you long for a more official type of Office reunion.

Nearly every character had a stint on Dunder Mifflin's Party Planning Committee during the nine seasons of The Office, but the core members were Angela Martin, Pamela Beesly Halpert, and Phyllis Vance. And there were always power struggles when it came to what each of these women thought made an acceptable office party. As Pam explained when she shut down the Party Planning Committee in Season 7, "At its worst, it was a toxic political club used to make others feel miserable and left out. At its best, it planned parties."

But a lot has changed since then and Pam actor Fischer showed the real-life love that exists between her, Kinsey, and Smith in her #WCW Instagram post.

While they might not have always seen eye to eye while planning office parties, Fischer, Kinsey, and Smith are all smile and hugs in the post. And that's because in real life, the actors of The Office has so much love for one another. Members of the cast often post photos of the Dunder Mifflin staff hanging out and Kinsey even revealed to Bustle how she once hosted her own Angela-style Yankee Swap party. And this photo shared by Fischer on April 17 appears to be from an Office cast reunion brunch that was hosted by showrunner Greg Daniels in December 2018.

Pam and Angela were most often at odds in the Party Planning Committee (and beyond), but Fischer and Kinsey are actually best friends. Kinsey even appeared on her BFF's current series, Splitting Up Together, for a Season 1 episode. So Kinsey is nothing like her cold and judgmental Office counterpart as her reply to Fischer's post — "I 👏 AM 👏 HERE 👏 FOR 👏 THIS!" — is a reminder of.

The Party Planning Committee photo wasn't the only gem that Fischer provided to Office fans recently. On April 16, she posted a behind-the-scenes video she took during the filming of the "Booze Cruise" episode. In it, you can catch Fischer asking guest star Amy Adams about her hair and Dwight Schrute himself, Rainn Wilson, singing Hall & Oates.

Kinsey also had a more recent Office reunion with her fellow accountant Kevin (Brian Baumgartner). Although she said in her Instagram Story that she couldn't reveal the details of the project just yet, Kinsey posted a photo of her and Baumgartner from the set. She also noted in her Instagram Story that she'll be at a Salt Lake City Comic-Con with her accountants Baumgartner and Oscar Nunez on April 19.

Fischer's post may have you feeling sappy, but there were some hurt feelings. In the comments, Kate Flannery, who played Meredith, indicated she was not happy being left out of the photo. Of course, Flannery was only kidding. But it's only right that a Party Planning Committee-related moment not be overly sweet. After all, even though everybody is friends in real life, it just wouldn't be true to the mean-spiritedness of this Dunder Mifflin institution.