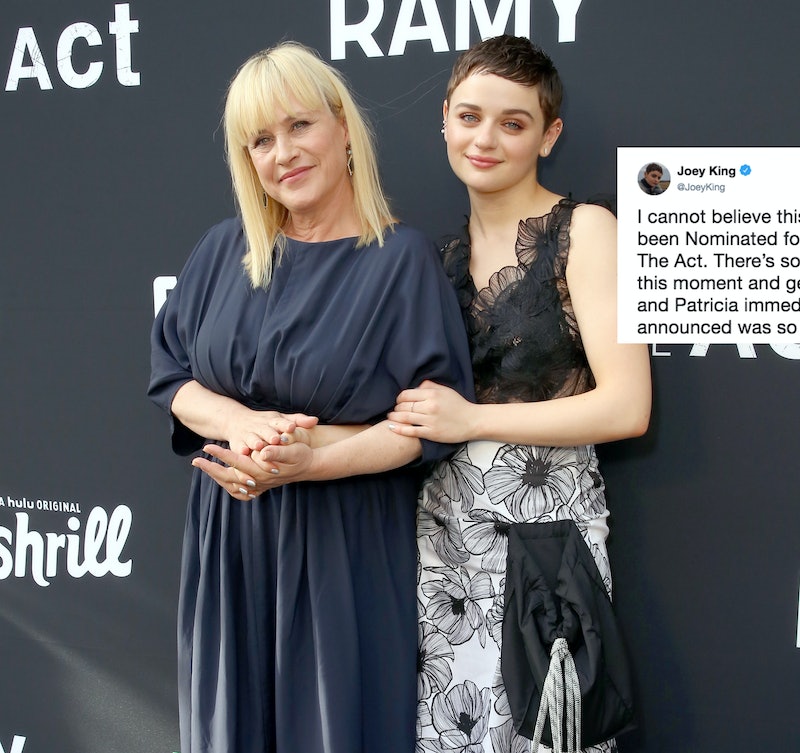 The countdown to TV's biggest night begins. On Tuesday, July 16, the 2019 Emmy nominations were announced. Sure, there were some snubs and surprises on the list, but anyone who watched a certain true-crime series on Hulu probably wasn't super shocked by the Outstanding Lead Actress in a Limited Series or Movie category. That's where Joey King was nominated for The Act for her portrayal of Gypsy Rose Blanchard, and King's reaction to her first Emmy nom will give fans so many feelings.

Along with a video where she's visibly sobbing and FaceTiming her loved ones, King wrote on Twitter:

"I cannot believe this is happening. I’ve just been Nominated for an Emmy for my work in The Act. There’s so many people to thank for this moment and getting to talk to my mom and Patricia immediately after it was announced was so special. I’m in shock"

Her costar, Patricia Arquette, is nominated in the exact same category for her work on Showtime's Escape at Dannemora, as well as being up for Outstanding Supporting Actress in a Limited Series or Movie for her role in The Act. Unsurprisingly, Arquette responded to King's tweet with her full support. She wrote, "You are so so so talented and you put everything into it. You deserve this. You are incredible. Shine girl!"

In The Act, the two play a real-life mother-daughter pair, whose relationship was both toxic and tragic. Arquette's character Dee Dee Blanchard was Gypsy Rose's mother and primary caregiver. Gypsy is believed to have been a victim of Munchausen syndrome by proxy, with Dee Dee reportedly convincing her that she had multiple illnesses and needed to use a wheelchair, even though she actually was capable of walking. Eventually, Gypsy tried to escape this alleged abuse by conspiring online with a man, who later murdered Dee Dee. (The actual Gypsy pleaded guilty to second-degree murder and currently is serving a 10-year prison sentence.)

While the Hulu series is undeniably hard to watch, it also serves as a testament to King and Arquette's acting abilities. And when promoting the show, King spoke out about hoping this helped shed light on a very real condition. King told Bustle back in March, "As long as people are being made aware that Munchausen by proxy exists, then that makes me a little more settled." She also mentioned wanting victims to know, "We’re here for you, you have an out."

Over on Instagram, the 19-year-old elaborated further on how she felt about her Emmy nomination. She wrote:

"This is me in South Africa on my way to set in the car live steaming The Emmy nominations announcement from the hotspot on my phone also known as the best moment in the world. My work on The Act was the most fulfilling and challenging work I’ve gotten to do as an actress thus far."

King's post continued, "To be nominated for an Emmy in a category with such INCREDIBLE nominees by my side, especially Patricia is the most surreal feeling. I haven’t stopped crying. Gettin to call Patricia right after and share this moment with her is something I’ll never forget."

She also thanked "everyone who made this possible, there’s so many people who are behind The Act that I couldn’t have done this without" and mentioned she couldn't wait to call all of them. Her post concluded in the most enthusiastic way possible: "OH MY GOD I CANT BELIEVE IM NOMINATED FOR AN EMMY."

Clearly King and Arquette are thrilled about their well-deserved nominations. Now fans will have to wait until the ceremony on Sept. 22 to see if the on-screen mother-daughter pair takes home those trophies.