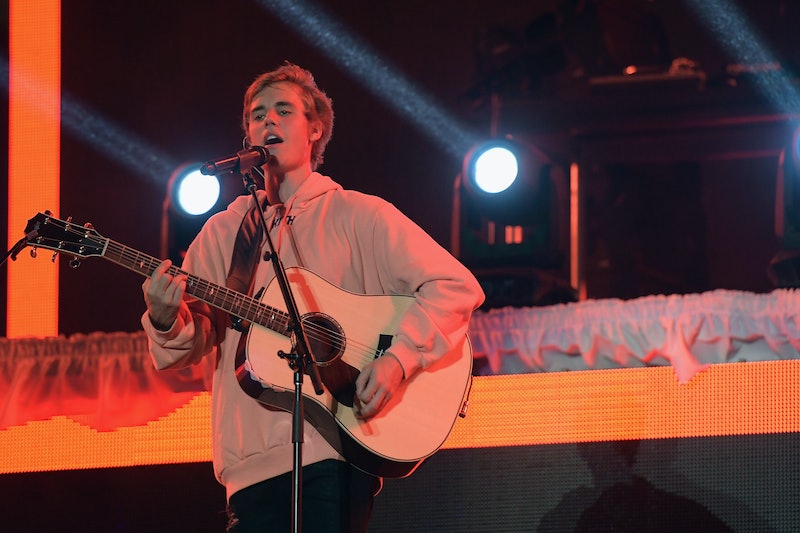 In the wake of his second wedding to wife Hailey Baldwin, Justin Bieber released "10,000 Hours," a collaboration with duo Dan + Shay that is sure to put everyone in the mood for romance. Bieber had previously teased on Instagram that his new music would be "wedding music," and the "10,000 Hours" lyrics certainly live up to that promise. The song dropped on Oct. 4, just days after Bieber's wedding to Baldwin in South Carolina on Sept. 30, and it's nothing if not a celebration of newlywed life.

Despite the fact that "10,000 Hours" is Bieber's newest collaboration, following on the heels of Ed Sheeran's "I Don't Care," but fans shouldn't get the wrong idea. Just because he's released two singles in 2019 doesn't mean a new Bieber album is on the horizon. People reported that "10,000 Hours" will appear on Dan + Shay's next album, not an upcoming Bieber release. But, while the country singers came up with the idea for the song, Dan Smyers and Shay Mooney told the radio show Taste of Country Nights how they had Bieber in mind when they began writing it.

During his radio appearance, Smyers noted that Bieber "wrote a couple of lines on it and put his spin on it" and how the "timing was perfect" for them to collaborate on a love song, as Bieber had just gotten married. The "Sorry" singer and model Baldwin had secretly tied the knot in a New York City courthouse ceremony in September of 2018, but they threw a large wedding bash a year later. Dan + Shay were actually in attendance at the second wedding, where they performed "10,000 Hours" with Bieber.

Bieber sings on the song, "Do you miss the road that you grew up on? / Did you get your middle name from your grandma? / When you think about your forever now, do you think of me?" It's not clear if those specific details are about Baldwin. (For instance, her middle name is Rhode while her grandmothers' names are Mary Ellen Deodato and Carol Baldwin.) But, the song's theme — about wanting to know everything about your partner — seems like something Bieber relates to.

While they might be newly married, Bieber and Baldwin have known each other since 2009 when Stephen Baldwin introduced his teen daughter to the pop sensation. Even with their long history, the lyrics in "10,000 Hours" have Bieber saying he will spend the rest of his life getting to know everything about his wife. "I'd spend ten thousand hours and ten thousand more / Oh, if that's what it takes to learn that sweet heart of yours / And I might never get there, but I'm gonna try / If it's ten thousand hours or the rest of my life," he sings in the chorus.

Baldwin and Bieber have been having fun showing off their wedded status, and this newest song is just one more example of that.

More like this
Justin & Hailey Bieber's Bond Is "Unbreakable" Amid His Ramsay Hunt Diagnosis
By Bustle Editors
Britney Spears Just Recreated One Of Her Iconic Record Covers
By Frances Stewart
Britney Has Been Granted A Restraining Order Against Her Ex-Husband
By Bustle Staff
What Is Ariana Grande's Net Worth? When It Comes To Money, She Has No “Problem”
By Hugh McIntyre
Get Even More From Bustle — Sign Up For The Newsletter