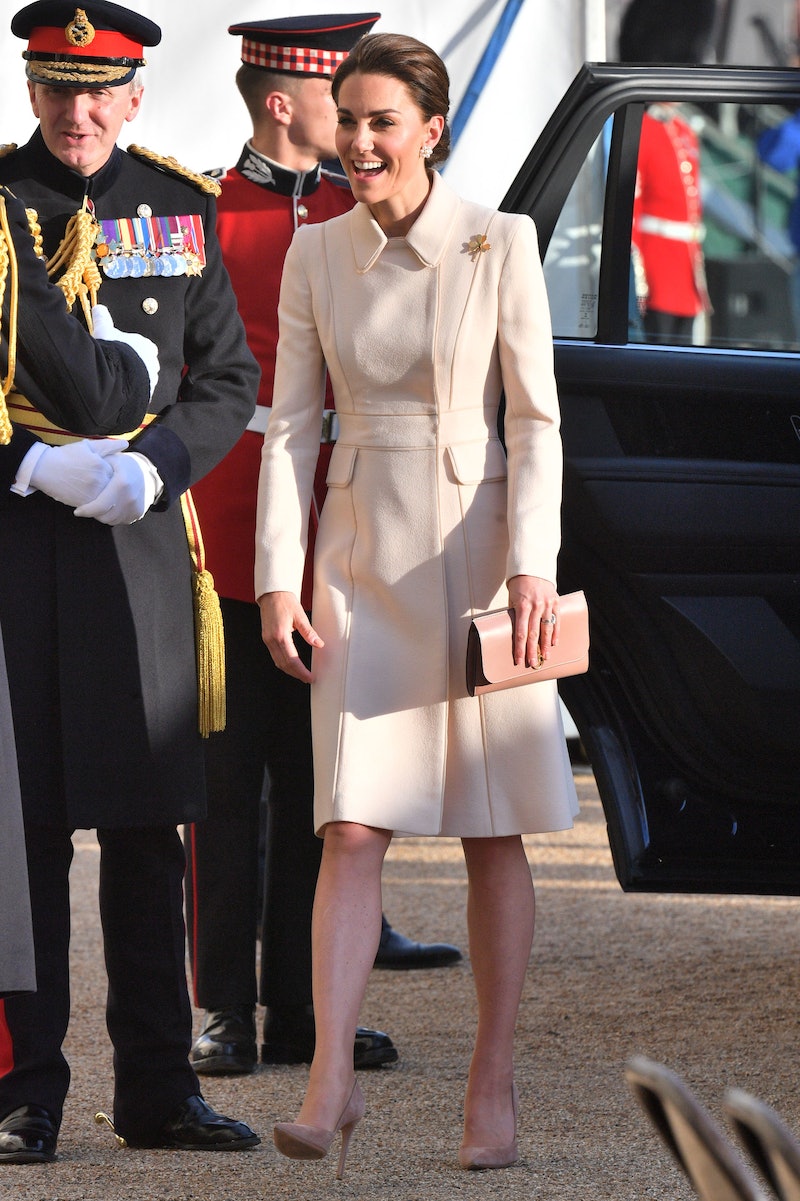 When it comes to royal style, Kate Middleton certainly seems to have a few signatures. In 2018 and 2019, the Duchess of Cambridge brought back the headband and the suit skirt. Now, Kate Middleton just wore a coat dress, and that's a commitment to a signature style considering that it's currently June.

According to Harper's Bazaar, Middleton attended the Beating Retreat, a concert hosted by the British army members who serve the queen. A royal family member is always there, and this time it was Middleton. For the event, the Duchess chose to wear a staple piece that she's frequently seen in, a Catherine Walker coat dress. While Middleton wearing a coat dress is nothing new, the fact that she wore one in June definitely demonstrates her commitment to the signature style.

Of course, in the United Kingdom, it's a bit more chilly than in most of the United States. According to weather reports, temperatures are ranging from 60-64 degrees Fahrenheit. However, a coat dress on a June day with those temperatures is still kind of warm. Regardless, though, the Duchess of Cambridge looked as perfect as ever in the cream dress that she accessorized with a tan clutch and a pair of nude suede pumps.

Middleton also wore a set of pearl earrings that could be seen thanks to her chic, swept-back bun. Is she adopting her own take on her sister-in-law Meghan Markle's signature style?

The Duchess also added a gold shamrock pin to the dress which Harper's Bazaar explains is a nod to the Irish Guards.

Middleton's coat dress in June isn't the only proof that she's committed to both the silhouette and designer. There's also the sheer number of times that she's worn them.

Most recently, Middleton chose to switch up the designer of her signature look. At the Queen's garden party, Middleton opted for a head-to-toe pink ensemble that was totally on trend. The coat dress that she chose, however, wasn't Catherine Walker. It was Alexander McQueen. Regardless, though, the Duchess looked gorgeous in his signature style.

Just a few months before the garden party, Middleton was again in Catherine Walker. The Duchess of Cambridge wore a bold, teal coat dress to Anzac Day ceremonies, joining her brother-in-law Prince Harry while wife Meghan Markle is on maternity leave.

If you aren't convinced that Middleton's staple item is the coat dress, she even wore one to her first solo engagement with the queen. When a silhouette is good enough to be worn while you're next to the Queen, you know it's a signature item.

If you've ever wanted to embody Kate Middleton's style, a coat dress seems like it's the way to go. While Alexander McQueen and Catherine Walker may not end up in your closet, the silhouette is definitely Middleton approved. Next time you want to dress like a Duchess, it's a coat dress for you (no matter what the weather is).