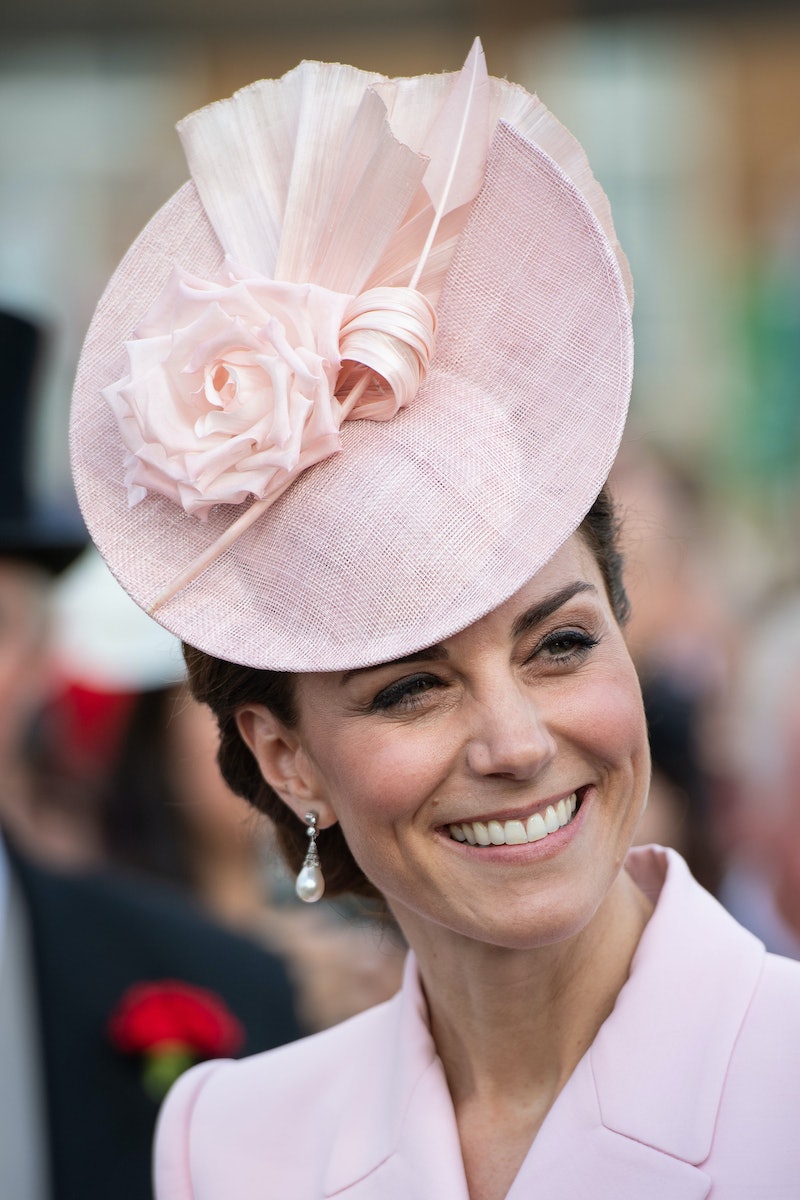 Spring is in full swing, and the royal family is dressing like it. On Wednesday, Kate Middleton's wore head-to-toe pink at the Queen's garden party. Not only was it the perfect color for the warm weather season, but the ensemble is further proof that the color is where it's at right now in fashion.

According to The Cut, Middleton stepped out with her husband Prince William to attend one of Queen Elizabeth's Buckingham Palace garden parties, and she looked so festive doing it. The Duchess of Cambridge was wearing a pink coat dress by Alexander McQueen paired with a perfectly matching Juliette Botterill hat.

The look was signature Middleton as she is often seen in coat dresses by one of her other favorite designers Catherine Walker. She's especially prone to wear the silhouette for more formal events like the garden party. No one can say that Middleton's style isn't consistent.

For some, seeing the Duchess in another coat dress may appear like not much news at all. However, it's not so much the style of the frock that's important but the color. Not only is the pink hue ideal for a springtime event like the garden party, but it's also part of a larger trend for the warmer weather months. Pink appears to be everywhere, and Middleton is taking up the trend mantle for the royal family in the classiest way possible.

This isn't, however, the first time that Middleton has chosen to wear pink in the past few weeks. Back in late February of this year, she wore a stunning chiffon gown by Gucci that was made of multiple shades of pink. While not quite spring at the time, the look could very well been ahead of the trend curve.

While Middleton's version of pink for the garden party was a more subdued, pastel version of the hue, it comes on the heels of the pink-filled Met Gala. At the 2019 annual event, celebrities and designers embraced a vibrant and bold shade of hue that certainly seemed to indicate for summer 2019 was going to be all pink.

Kacey Musgraves' Moschino look channeled an all-pink Barbie while Lady Gaga's four (yes, really, four) looks from Brandon Maxwell showcased the versatility of the shade. While bold, hot pink was in, some, like Nicki Minaj in Prabal Gurung, embraced a more subtle version of the color as well. Even the carpet for the Met Gala was pink!

While both Middleton and her sister-in-law Meghan Markle have both worn bold colors like yellow, embracing a hot pink trend seems like it may be asking a bit much of royal style. That doesn't mean that Middleton has to give up the trend completely, though.

Her look at the Queen's garden party proves that there's always a way to rock a trend. For Middleton, that seems to be paring down the vibrant shade of pink that's so huge for summer. Honestly, she crushing it.