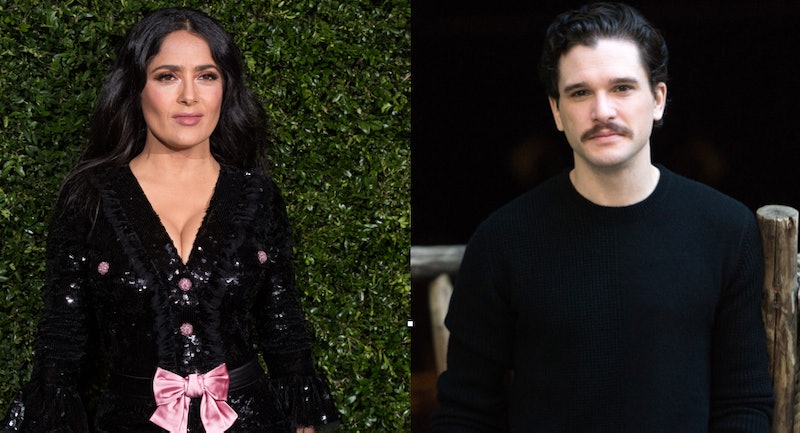 Becoming synonymous with a particular character can be a bit of a bind for those in the world of acting. Especially when it's a role on one of the biggest TV shows of all time and you were famously told that you know nothing by a Wildling. But for Kit Harington life after Jon Snow is actually going pretty well. Which is impressive considering that Game Of Thrones kept his character on some pretty high level stress for the best part of a decade. For one thing, Kit Harington is working with Salma Hayek on a new film. So looks like he is up and over that damn wall.

The news was revealed in a photo shared by Hayek on her Instagram account. The image of the two actors looking happy as a pair of clams, was accompanied by a seriously sweet caption. It looks like it's about to be a serious meeting of minds. "I still can't believe that I'm working with #jonsnow ! Kit you're the best!!!" Hayek wrote.

She also translated the sentiment into Spanish for her Spanish speaking fans. However, the big reveal was in the hashtags. Because it's 2019 and that's how we share information now. And it's the latest movie in the Marvel universe #TheEternals which has fans chomping at the bit.

Entertainment Weekly reports that Harington is set to play the character of Dane Whitman, who in the comic books became the superhero, the Black Knight. Hayek is playing Ajak, the leader of the Eternals, which is pretty cool because Ajak is usually a male character.

As Bustle reports, the eternals are a group of humanoid beings who are immortal. They were created thousands of years ago by a group known as the Celestials. A group which, in the interest of a bit of drama, also created a similar (but evil) group of mortal enemies known as the Deviants. All I'm saying is I know which side I would want to be on. Cough. The Deviants FTW.

So, super fans will know this isn't new news. Nope, the casting for the upcoming film was announced previously and guys, the line up is looking absolutely redonkulous.

The line up, reported by Entertainment Weekly is low key breath taking. Two of the Stark clan will be reunited, with Richard Madden starring alongside his former TV brother Harington as Icarus. Meanwhile Angelina Jolie will be joining the team playing Thena. Kingo is set to be played by Kumail Nanjiani who you probably know best for his incredible performance in The Big Sick. Lauren Ridloff of The Walking Dead stars as Makkari, while Brian Tyree Henry will be playing Phastos, hot on the heals of his incredible depiction of Paper Boi in Atlanta. Meanwhile, Lia McHugh has been cast as Sprite, and at 12 years old, she's the youngest ever actor to play a Marvel superhero, as EW notes. Last but absolutely not least, Don Lee will be playing Gilgamesh. Lee is best known for starring in Train to Busan.