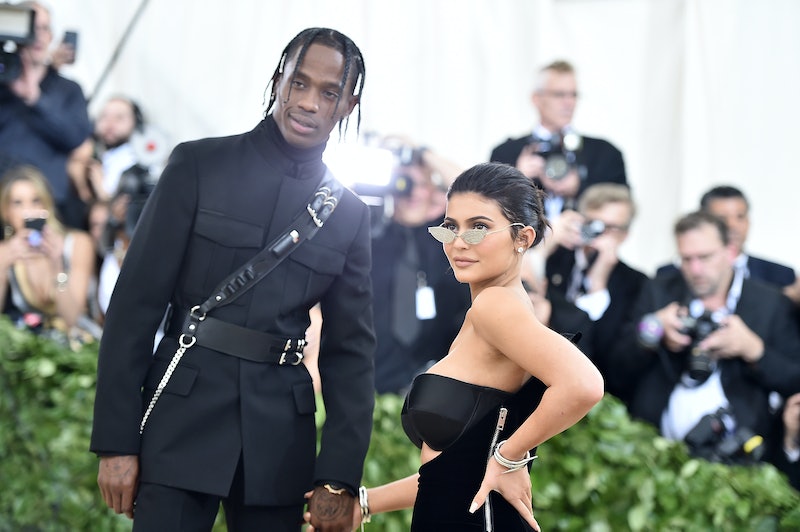 When it comes to birthdays, the Kardashian and Jenners know how to party. From Kris Jenner's incredible 1920s-themed soiree to True Thompson's recent first birthday, the Kar-Jenners are basically professional birthday celebrators. At the most recent soiree, Kylie Jenner and Travis Scott may have gotten matching tattoos for his birthday. Nothing says love like permanent ink, right?

Neither Scott nor Jenner are strangers to tattoos. In fact, both have several, and while Scott's may be markedly more visible and out number Jenner's, they both clearly love getting ink based on the number of tattoos they both have. Now, it seems that they've added a set of matching ones in honor of Scott's birthday.

In an Instagram video posted to Jenner's account, the pair are at a party she planned to celebrate the rapper's birthday. The gas station, Cactus Jack themed soiree featured everything from Cactus Jack sneakers to Travis Scott paper towels to Astroworld merchandise to a whole lot of fog. Also at the party, though, was a tattoo parlor set-up that was complete with a shining neon light. As the video progresses, fans of Jenner's see her sitting in the tattoo chair with her arm extended backward getting tattooed. In the next video, Scott is in the chair also getting a tattoo on his arm.

While the pair clearly got tattoos together, though, neither revealed what they were on social media. Could they be Stormi-themed tattoos? Their anniversary date? So far, no one except Jenner, Scott, and those at the party know.

If the pair did, in fact, get matching ink though, it wouldn't be the first time. Back in June 2017, Jenner and Scott got matching butterfly tattoos. While many thought the ink was a clue to the pair's choice of baby name, that turned out not to be the case when Jenner announced their child's name, Stormi, after her birth.

While the butterfly tattoos' meaning may be personal and not publicly known (though it's likely related to Scott's song "The Butterfly Effect"), the fact that they already have matching ink could be a sign that they'd do it again.

This also isn't Jenner's first time getting matching ink with someone. While the status of she and Jordyn Woods' friendship is somewhat unknown following allegations of Woods and Tristan Thompson hooking up, Jenner does have matching ink with her former best friend. The pair got what look to be the cursive letter "M" on their pinky fingers back in 2016.

However, even if Jenner and Scott's new tattoos don't exactly match, it doesn't change the fact that they got them together for the rapper's birthday. Whether they're the same or not, the memory associated with the ink will still likely be of one another. They're not the only celebrity couple to do so, either. Justin Bieber and Hailey Baldwin (no Bieber) have gotten tattoos together in the past, but the ink isn't actually matching.

As for whether or not Jenner or Scott will reveal their new ink is yet to be seen. Regardless of if they do or don't, though, one thing is for sure. Kylie Jenner knows how to throw a birthday party.