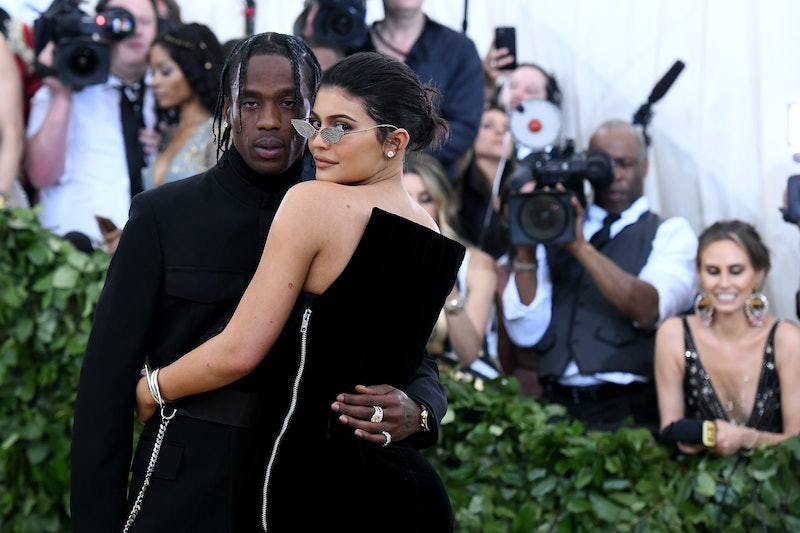 He might have millions of fans, but nobody loves Travis Scott more than his girlfriend and their baby daughter. On Friday, March 15, Kylie Jenner and daughter Stormi showed their support for Scott in an sweet snapshot on the reality star's Instagram account.

In the photo, Jenner is cuddled up to her one-year-old daughter, while rocking a pair of Astroworld sweatpants as the pair relax on a bed together, which Jenner captioned simply, "baby girl🖤🖤." The adorable photo is one of the first times that Jenner has shown her daughter's face since her gushing post celebrating Stormi's birthday on February 1. Though she clearly loves sharing videos and photos of her baby girl on social media, in June, the Kylie Cosmetics founder told followers that she was "not sharing photos of my girl right now," but changed her mind a few months later.

While Jenner didn't confirm if she and Stormi are on the road with Scott at the moment — the rapper is next scheduled to perform in Tampa, Florida on March 17 — the makeup mogul has been supporting Scott at his concerts since they first began dating back in April 2017. "Coachella was one of the stops on his tour," Jenner told GQ in July about hitting it off with Scott at the music festival. "So he said, ‘I'm going back on tour — what do we want to do about this?’ Because we obviously liked each other. And I was like, 'I guess I'm going with you.'"

"I really jumped on the bus. And then we rode off into the sunset. I did the whole tour with him," she recounted about her instant connection with her rapper boyfriend. While some might question her decision to head out on the road with a new flame, Jenner explained that the time they spent on tour helped her and Scott get to know each other out of the spotlight and to fall in love. "I live on my own, and so I just rode off into the sunset. We had a lot of downtime. It was organic," she told GQ.

"And we would just go to these random cities. We got to not be who we really were. Like, if we were in L.A., I feel like it would've been way different," Jenner explained. "Everything happened for a reason. We weren't going out as 'Kylie and Trav.' We would just be in Cleveland, walking the street for hours. We would go on walks, and no one would bother us."

Since being on tour is such an important part of Jenner and Scott's love story, it's no surprise that the pair decided to make the rapper's Astroworld tour a family affair. In November, Jenner revealed that Stormi has her own room on the tour, and explained in a vlog on her YouTube channel that her daughter hangs out backstage before the shows until it's "bed time."

According to E! News, Scott reflected on how important it is for him to have his family join him on tour during a visit to the the Children's Healthcare of Atlanta at Egleston hospital on Nov. 13. "It's so hard, because I grew up in a different household where I never had a nanny or nothing like that — my parents were never on a tour — so being able to do that and figure it out at 26, it's like hard, but when you're going through it, it's like, 'Oh this is dope,'" Scott said, adding that having Jenner and Stormi with him was a "life goal" realized.

Considering that the parents threw Stormi an Astroworld-inspired carnival for her first birthday party, it seems as if Scott isn't the only member of the family who has loved the family tour adventure. Here's hoping that the future tour stops bring even more adorable mother-daughter photos from the road.