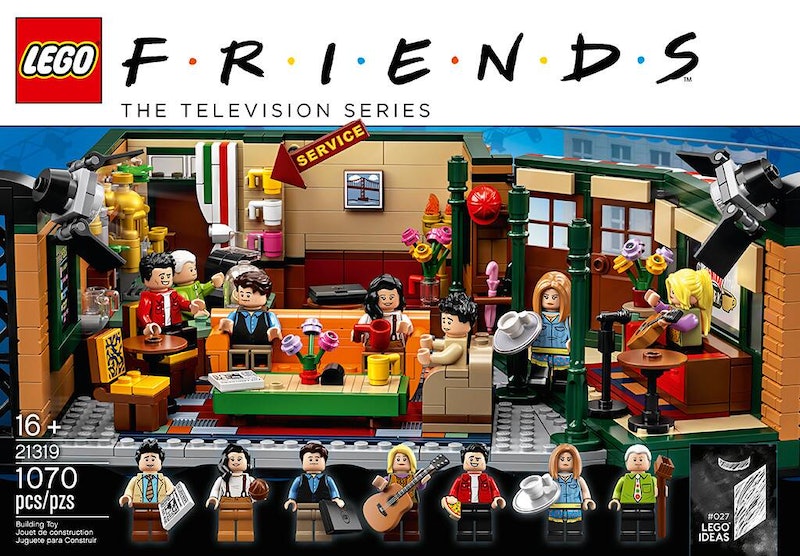 First came the tease — but now the world finally has some real details. If you, like the rest of the 90s-loving world, were thrilled when you found out about the Friends-inspired LEGO set to celebrate the show's 25th anniversary, then you're about to get even more hyped. It is now official: a LEGO Ideas Central Perk Set for Friends fans is coming your way.

This week, the brand gave us a little preview of what was to come — a Twitter photo of the infamous Friends characters in LEGO form, complete with the bright orange couch. "The one with LEGO bricks," the tag read — and the internet exploded.

Well, now E! reports some more tantalizing details, so you can start to get truly excited about the LEGO Ideas Central Perk Set. The 1,070 piece set (yes, you read that correctly — over 1,000 pieces) puts the six characters into their natural habitat, Central Perk. And, of course, Gunther is there and ready to make the coffee.

But that's not all. You'll also get a stage — so Phoebe can perform, obviously — and the outside area and also a whole lot of bonus decorations and accessories. "Look for the coffee machine, the service counter, the cookie jar, cash register and more," E! reports. "Accessories include Ross' keyboard, Rachel's tray and coffee cup, Monica's muffin, Joey's pizza box, pizza slice and man bag, Chandler's laptop, Phoebe's guitar, and Gunther's broom. The set also comes with 15 coffee cups, a newspaper, the reserved sign, three vases, and flowers."

Is that enough Friends for you? The set is reportedly available starting September 1, so not too long to wait.

Although a set with over 1,000 LEGO pieces feels like it should be enough Friends to last you a lifetime, this 25th anniversary year has shown us that thirst for Friends is truly insatiable — people just cannot get enough. And with Friends leaving Netflix in 2020 (RIP), fans are embracing the many, many other ways to show their love of the '90s hit.

Just to get a tiny taste of how wild we are going for the Friends anniversary, you can currently get your hands on a Pottery Barn Friends collection (with an apothecary table, obviously), Friends Hot Topic accessories like a hilarious turkey magnet, and a Friends Coffee Bean & Tea Leaf collaboration so you can feel like you're buying your coffee straight from Central Perk. That not even getting into the abundance of Friends merch available on Etsy, including amazing Friends coffee tumblers and even Friends wine glasses designed to be in your actual wedding. Oh — and there's a Central Perk pop-up opening in New York this year.

Phew — there is so much Friends happening that it's easy to get lost in it. If you're looking at celebrating this year with some memorabilia, then you better pace yourself — this is a marathon, not a sprint. In fact, we haven't even reached September 22, which is the actual 25th anniversary of the first-ever episode, so who knows what else will pop up between now and then?

There are a lot of Friends fans, but how many fans are true enough to do a 1,070 piece LEGO set dedicated to the show? Well, if that sounds like you, then September 1 is the day you've been waiting for. May your fingers be nimble and the tiny pieces not fall behind the couch. Good luck.