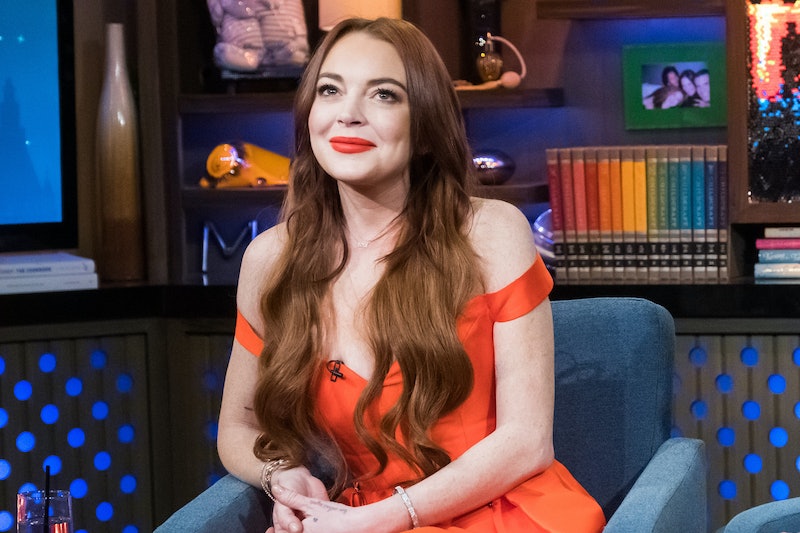 Lindsay Lohan never really left the spotlight thanks to her reality shows and multiple scandals, but she's definitely making her star comeback with her first new single in years. The lyrics for Lohan's "Back To Me" show that she's ready to move on from her past and accept who she has become. And not only is the track a reflection on self-acceptance, it's also a banger.

"Back To Me" was released on April 3, just three days after Lohan had announced she was "back" via a video on social media. Though Lohan kind of, sort of made her return to music with the song "Xanax" in 2019, Vulture reported that she deleted it from her Instagram and it's unavailable to stream. The song's disappearance is all well and good anyway since "Back To Me" is a bit more appropriately personal for her musical comeback.

"I used to blame me when sh*t got crazy/I can't think too much 'bout what they say/And now these Sundays got me feeling like Mondays/I know I drink too much, but it's OK," she sings in the opening. She later adds, "I'ma do it right and let it go/Everything I can't control/Shoulda done it long ago."

With lyrics about drinking too much alcohol and (ahem) the "Rumors" about her, she sings in the chorus "Now, I'm coming back to me." As Lohan wrote on Twitter ahead of the song's release, "The song is about rediscovering and accepting oneself, shutting out the noise and moving forward and letting the past go. Living in the now."

Following her success as the young Disney star — Parent Trap and Freaky Friday — Lohan built on her acting fame with the release of her two studio albums, 2004's Speak and 2005's A Little More Personal (Raw). But her career began to suffer as her personal life became more chaotic. After she was in rehab for alcohol abuse in 2013, Lohan had a reality series on the Oprah Winfrey Network that followed her as she tried, and failed, to rebuild her career. Since then, she's mostly kept away from Hollywood.

Lohan has been acting in recent years, with roles in the British comedy series Sick Note and the Belgium-American horror film Among the Shadows. She also opened up nightclubs and resorts in Greece, and has made an effort to step away from her old party girl reputation. "I'm a normal, nice person. A good person. I don't have any bad intentions. And my past has to stay in the past," she told The New York Times, encouraging people to let go of her past behavior. "Like, people have to just let go of it and stop bringing it up because it's not — it's gone," Lohan continued. "It's dead. And that's the most important thing to me."

Despite wanting to move on from her past, Lohan has faced some career obstacles recently. Lindsay Lohan's Beach Club, the Vanderpump Rules-style reality show about her Greek beach clubs, was not renewed for a second season at MTV, and she was reportedly fired from Australia's The Masked Singer.

But as the lyrics and chill club vibe of "Back To Me" show, she's not worried about what people think about her. Instead, she's looking forward and accepting herself for who she is — and releasing catchy AF music along the way.

More like this
The Spice Girls Just Dropped A Brand New Music Video
By Sam Ramsden
Craig David Is Still Slicker Than Your Average
By Olivia-Anne Cleary
20 Years Later, Kelly Clarkson & 'American Idol' Judges Reunite For Her Hollywood Walk Of Fame Star
By Radhika Menon
Kate Bush Revealed The Real Meaning Behind 'Running Up That Hill' Lyrics
By Darshita Goyal
Get Even More From Bustle — Sign Up For The Newsletter