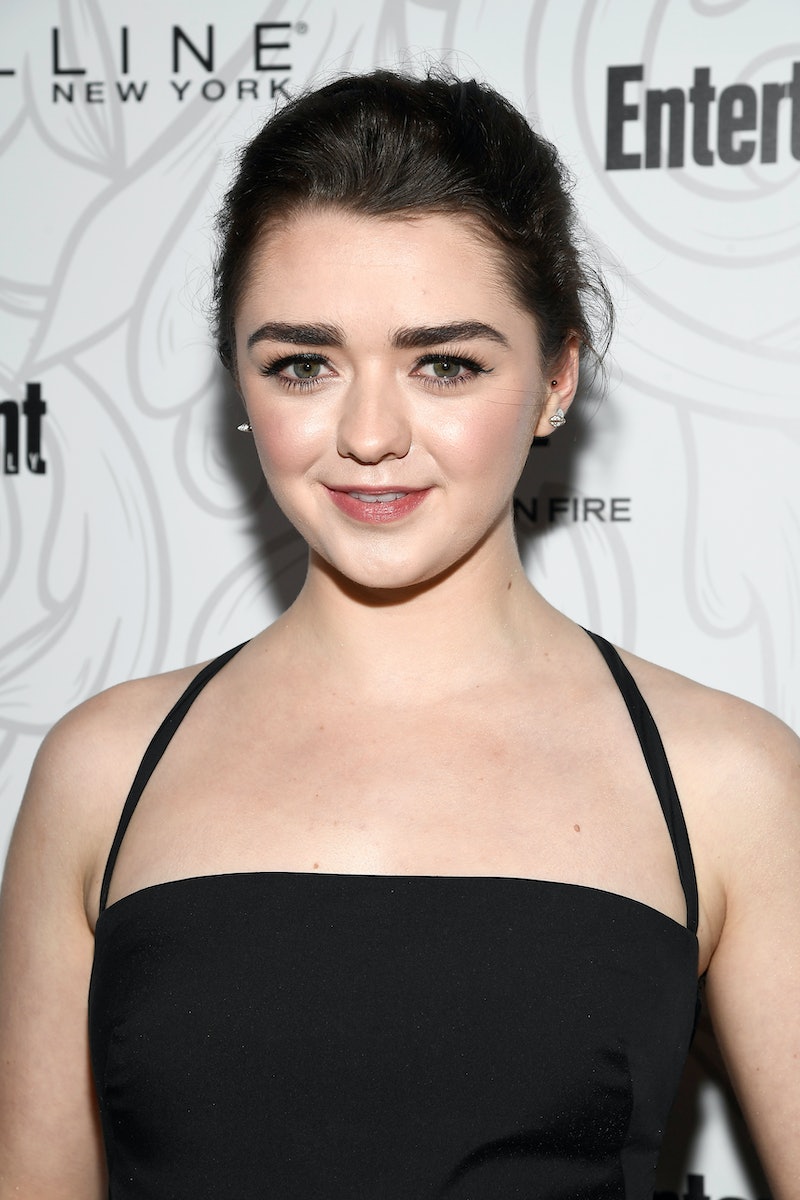 Arya Stark has a new pet, but it's probably best not to tell Nymeria. Game of Thrones actor Maisie Williams got a Tamagotchi, and the way she's embracing this '90s trend — while taking fans along for the ride — will delight you. There's nothing quite like welcoming a new pet into your life, and if you happen to be a '90s kid, that goes double if it's a digital pet that you can clip onto your backpack. The Tamagotchi was once the must-have toy, even though they were a guaranteed gateway to heartbreak, because neglect of your digitized pet led to its untimely demise.

However, just because your dead Tamagotchi is collecting dust in a box in your parents' attic doesn't mean the fad toy disappeared from store shelves. Tamagotchis are still available, and Williams has one that she's super devoted to. On Friday, the actor posted a string of updates about her pet on Twitter. First, there was a picture of her lounging in bed with "her son." Then she moved on to important topics, like asking her followers to help her name her Tamagotchi in a poll, and wondering how she can keep him from growing into "one of the ugly" shapes (come on, all Tamagotchis are beautiful in the eyes of their pet parents).

At 20, Williams missed out on the Tamagotchi craze the first time around, but she's embracing it in a big way now. She's been tweeting reminders to her fans to help her name her new hatchling, and the options are adorable. The newest member of the Williams family is set to be named Sebastian, Pablo, Earl, or Keith. Currently, Pablo is in the lead.

Like many first time digital pet parents, Williams is worried about more than picking out the perfect name for her little guy. She also wants to make sure he turns out to be aesthetically pleasing, and she's wondering how long it will take for him to grow up. Any former Tamagotchi owner will advise Williams to treasure this time with her young pet, because not only does it not last long, it was rare for a '90s kids' Tamagotchi to make it out of childhood before it perished from neglect.

To be fair, though, those little things were super needy. They couldn't make it half a day without attention, and since many schools banned them for their incessant beeping, they would starve before their owners got off the bus. Life was full of hard-knocks for the Tamagotchis of yesteryear, but the newer models appear to be slightly less demanding. That's good news for Williams, who is a little busy filming Season 8 of Game of Thrones at the moment. Maybe-Pablo is just going to have to understand that his mom is busy.

So far, nearly 60,000 people have weighed in on what Williams should name her pet. It's clear the internet is so here for the actor taking her fans along on her journey as a Tamagotchi parent. Even though she is a wee bit busy with Game of Thrones, her slate of upcoming movies, and — fingers crossed — helping her best friend Sophie Turner plan her wedding to Joe Jonas, a girl needs to make time for Tamagotchi updates.

Now that Williams has revealed her son to the world, regular updates are going to be a necessity. Because the only thing better than having your own Tamagotchi is watching Arya Stark's grow from a wee digital egg into a uniquely shaped 8-bit cutie.

For Williams' sake, everyone should hope that her Tamagotchi doesn't pull a Nymeria. Watching Arya say goodbye to her direwolf was hard enough, and absolutely no one is ready to see Williams bid her latest pet farewell. May the new gods and the old look after Williams' Tamagotchi, because her journey as a digital pet mom is just beginning.

More like this
Matt Smith Proves He's Daddy Daemon In This Viral 'House Of The Dragon' Video
By Marina Watts
Paris Hilton’s Tweet About The 2006 “Holy Trinity” Photo Will Make You Feel Old
By Marina Watts
The First Trailer For 'That '90s Show' Includes So Many Nods To The Original Series
By Jack Irvin, Alyssa Lapid and Grace Wehniainen
Lindsay Lohan Just Recalled A Hilarious 'Parent Trap' Story
By Sam Ramsden
Get Even More From Bustle — Sign Up For The Newsletter