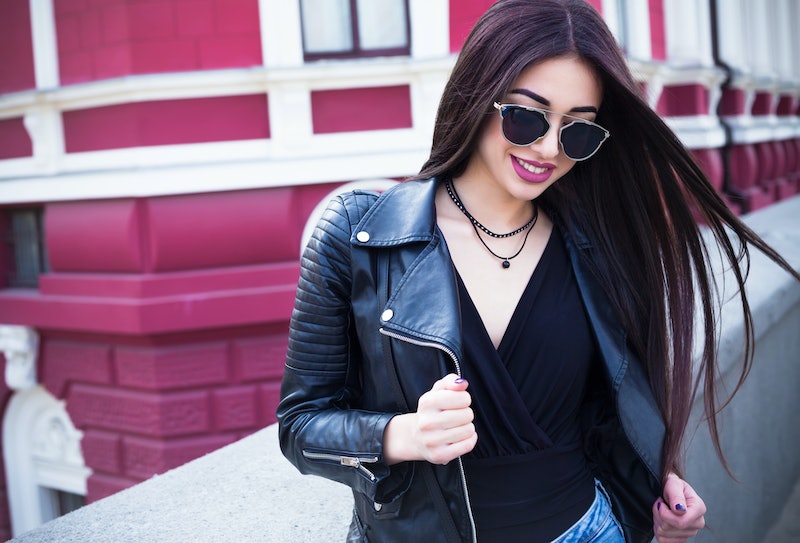 We've had one heck of a Scorpio season this year, haven't we? We were served with the astrological mayhem of the Halloween Mercury retrograde right smack in the middle of it, but that doesn't mean we didn't get to bask in the gloriously dark and intense Scorpio vibes nonetheless. The sun moves out of Scorpio on Nov. 22, kicking off the holiday season. But just because the major astrological spotlight isn't on you anymore, Scorp, doesn't mean we've forgotten you. In fact, we're serving up some advice on what Scorpios should and shouldn't do during the 2019 holidays, because there's still a lot going on in your sign's territory and we could all use a little cosmic guidance. Even moody, brooding, control-lovin' types like you.

Just kidding, no shade on Scorpios (I'm a Scorpio rising sign myself — plus, duh, I obviously know better than to shade a Scorpio). But here's the deal, scorpion sisters: You better watch your mood if you want to avoid some holiday explosives. Mars (aka the planet that rules war, anger, sex, power, and all sorts of other animalistic instincts) is moving into your sign as of Nov. 19 and will be sticking around for six whole weeks, through Jan. 3 — meaning it'll be there for the duration of the holiday season 2019.

Mars is definitely happy in Scorpio, given that it's one of the sign's planetary rulers. "Mars, always the competitor, gains more firepower and energy when it enters the intense field of Scorpio," wrote astrologer Pam Ciampi in Llewellyn's 2019 Daily Planetary Guide of this transit. "Although this switch gives the ability to act on your deepest desires, the tricky part is that when Mars is in Scorpio, it is passive-aggressive. With this in play, the way to achieve your goals is by indirect means and avoiding direct confrontation." But along with Mars' energy comes its fiery temper and impulsive hot-headedness, so be wary of an overdose of that energy in your realm over the holiday season.

And then, of course, there's Mercury, which has been blowing up your sign for double the time this year thanks to its retrograde period. Mercury goes direct in Scorpio on Nov. 20, ending its final 2019 retrograde period, but will transit through Scorpio through Dec. 9. This means that this chatty and intellectual planet's retroshade period will still dominate your house of self until then, making you feel the effects even stronger — but will finally leave you be once the end of December rolls around.

All in all, there's lots of advice to heed if you want to make the most of your end-of-year festivities, and Bustle chatted with astrologer Lisa Stardust who weighed in with some of her tips, too. Check out the do's and don'ts of the holiday season 2019 for Scorpios.

Mercury retrograde may end on Nov. 20, but it's post-shadow period (aka retroshade) rages on (in your sign, I might add) through the first week of December, so you can bet it'll be messing with the fine print. "Keep receipts in case there’s an issue with your gifting or presents you’ve received," advises Stardust. It takes a while for the retrograde dust to settle, and because this one was hitting Scorpios harder than most signs, you'll want to be careful about making major purchases and saving receipts.

You tend to be a more observant type, but if someone crosses you, that poisonous stinger of yours won't hesitate to shoot. Obviously, family gatherings over the holidays can be triggering — especially if your political beliefs don't align — but try not to let your temper get the best of you. "Don’t over express your political beliefs, as it may be the source of intense arguments," advises Stardust. While it's important to speak up for what's right, try not to let Mars' influence in your sign cause you to lash out.

DO: Make Time For Prioritizing Your Career Goals

"You're on fire! When motivator extraordinaire Mars marches into your sign, you'll have a dozen brilliant ideas that you're dying to get working on now," wrote astrologers Ophira and Tali Edut of Scorpio's holiday season in The AstroTwins' 2019 Horoscope. Yes, the holidays are busy for everyone, but make time to capitalize on this auspicious, exciting energy that's helping your creative ideas flow, Scorpio. "Since the red planet is better at starting things than finishing them, make sure to prioritize, set up timelines, and pace yourself."

DON'T: Be A Control Freak About Holiday Plans

Everyone's got schedules to balance and family baggage to drag around with them to holiday gatherings, so keep that in mind before indulging your impulse to be in control of everything. "Don’t dictate who sits where at the table and take control," warns Stardust. "Loosen up!" Now's a time to let your hair down and relax, because trying to silently slip into the drivers seat when there are so many factors at play will only make you stressed. "Let go! Have fun! Enjoy the holiday and have a splendid time with your family," shares Stardust.

DO: Take A Tech Break To Enjoy Time With Loved Ones

With Mercury retrograde (and retroshade) having just taken place in your Sun sign, you're definitely feeling the after-effects of these past weeks of mayhem. That said, a nice holiday tech break will do wonders to refresh your mind and spirit. "Disconnect from the stresses of life. Turn your phone off and decompress," advises Stardust. "Live in the moment!" There's no need to feel chained to your e-mail inbox or waste your mental energy scrolling social media. Check that barrage of outside influence at the door so you can be present with your loved ones. "Don’t bring outside stresses to your holiday meal and parties," continues Stardust. "It’s time you forget your troubles, if only for a moment."