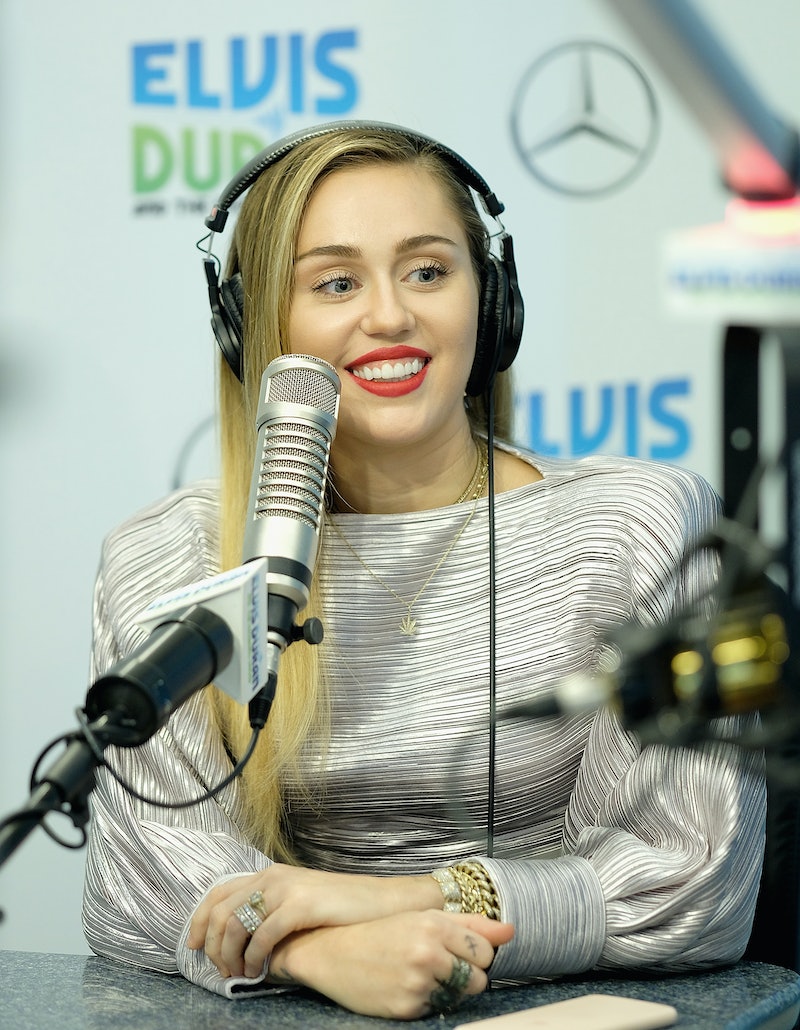 When it comes to tiny tattoos, Miley Cyrus may be the queen. From her adorable avocado tattoo to her jar of Vegamite that's rumored to be in honor of her now-husband, Liam Hemsworth, she loves a small bit of ink. Now, there's a new one. Miley Cyus' NSFW tattoo is the most recently added member of the tiny tat family, and while you may be taken aback at what the tattoo says, you'll also say, "Yeah, it's Miley."

According to Marie Claire, Cyrus visited New York City based tattoo artist Bang Bang to get her latest tattoo. The "Nothing Breaks Like A Heart" singer got a small tattoo added to her ankle that reads "Pussy" in delicate script. Honestly, the combination of the somewhat NSFW work and the romantic script is kind of amazing.

As of press time, there's been no word from Cyrus or Bang Bang regarding the tattoo's meaning. However, there can be some educated guesses. Obviously, Cyrus is very involved politically and from the pussy hats of the Women's March to the reclamation of the word following the release of the Access Hollywood tape with Donald Trump, the new tattoo could very well be meant as a way to embrace the word and the feminine.

In photos posted to her Instagram account, fans can see Cyrus getting new ink and posing with her existing pieces as well. While you can't see the new pussy tattoo in her Instagram photos, you can see the full tattoo here. As for what's happening in the images from her personal Instagram, there's been no word, but it seems she may have gotten more than just the new ankle tattoo. Of course, given just how many tattoos Cyrus has, there's also the chance that she got a touch-up on some of her older tattoos.

Due to the sheer number of tiny tattoos she has, Cyrus is certainly the queen of the ink, but she's definitely not alone. In fact, tiny tattoos seem to be a major thing for many of Hollywood's biggest stars. From Kylie Jenner to Justin Beiber and Hailey Baldwin, tons of famous faces have small, delicate tattoos that you may not even know about.

One of the most talked about tiny tattoos lately is Justin Bieber's face tattoo. Done at the same shop as Cyrus's pussy tattoo, Bieber's ink is so tiny that it's basically unreadable unless there's a close-up shot of it. Thankfully, only a few weeks ago, Bang Bang NYC tattoo artist Jon Boy posted an image of the singer's tattoo, and fans discovered that it actually reads "Grace" in extremely delicate script.

Another champion of the small tattoo? Kylie Jenner. The reality television star and makeup mogul has multiple small bits of ink including matching pieces with her best friend Jordyn Woods and one dedicated to her grandmother Mary Jo. Unlike other tiny tattoos, though, Jenner's are almost all done in red ink. However, some were done by, no surprise here, Bang Bang.

Miley Cyrus' new NSFW tattoo may be the latest in her collection of small ink, but she's not alone in her love for tiny tattoos. It seems the trend of small body art is going to keep going.