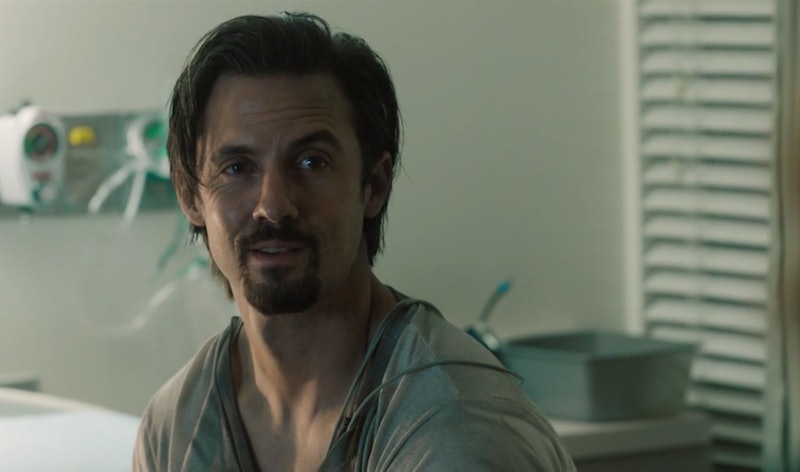 It's been over two months since This Is Us fans learned exactly how Jack Pearson died. That may be enough time for some people to come to terms with the beloved patriarch's passing, but for others, it's still too fresh. And if you fall under the latter category, prepare yourselves for what's coming. On Wednesday, Milo Ventimiglia shared an Instagram about Jack's death. He really knows how to make fans emotional — on and off screen.

The Instagram features a zoomed in portion of an elevator. Above the floor numbers, there is a phone jack, but it's the words around it that caught Ventimiglia's attention. In the photo, he points to the phone jack and the words, which read: "Fire Phone Jack". Too soon, Milo! Too soon!

As fans of the NBC drama know, Jack died due to smoke inhalation from a house fire. After the Pearson home caught fire (thanks to that pesky slow cooker gifted by George), Jack acted like the brave and wonderful man he's always been by ensuring he got everyone out of the house. Then, of course, he just had to go back inside to save Kate's dog and pick up a few family memories, aka "the important stuff", along the way. He was a real-life superhero, to say the least. As Rebecca said to him, "You are something else."

At the hospital, his death turned out to be even more awful and heart-wrenching than originally thought. While Rebecca was getting a snack at the vending machine, Jack called out to her right before he went into cardiac arrest and died.

It will forever go down as one of the most heartbreaking This Is Us moments. Right after Jack's death was revealed, fans, obviously, reacted emotionally. While appearing on Jimmy Kimmel Live! in February, Ventimiglia even said fans wanted hugs from him, because it's so hard to deal with the loss of Jack. "I can't escape it," the 40-year-old actor told Jimmy Kimmel. "A lot of people, they want a hug. They don't really ask me for advice, but they want that paternal knowing that things are OK."

TV deaths are known to affect fans, but Jack's has seriously impacted people. When you have a character, like Jack, who is sweet, kind, a loving husband and father, and a man who isn't afraid to embrace his emotions, his death is going to hit viewers a lot more than deaths of other characters. Ever since Jack first showed up on television, viewers immediately knew how special of a character he was and how much he was going to change the lives of fans.

So, while some might take Ventimiglia's elevator Instagram at face value, it's so much more for This Is Us fans. That's the beauty of the show. It's one of the most relatable dramas currently on the small screen. This Is Us is everywhere, and even in the most random of places, i.e. an elevator.

As sad as Jack's death was and as much as it still affects fans, Ventimiglia wants people to remember Jack in an uplifting way. "Jack would probably just want to be remembered as an influence of hope, and good, and positivity, and love," he told Bustle in February. "I think death is a part of life," he added. "We all experience it in different ways. We all will experience it for ourselves. So I think people should accept that it happened. Try and find the love and the message that this man lived with — of living very simply and loving his wife and loving his kids."

So, instead of crying at Ventimiglia's "Fire Phone Jack" photo, maybe fans can find the good in it and remember Jack's life rather than his death. But, that's definitely easier said than done, so if you need to go cry into an entire box of tissues, no one will judge you at all.