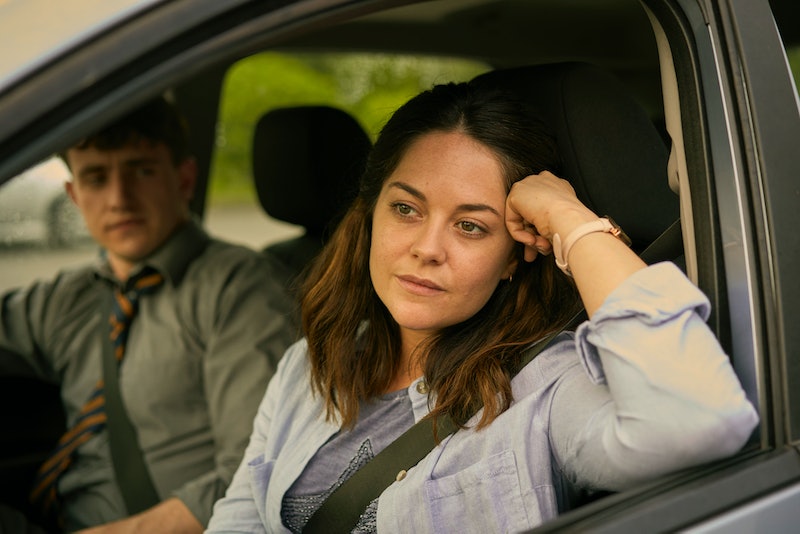 “I went from playing teenagers on stage to mums of teenagers very quickly,” laughs Sarah Greene on the line from Belfast. Not that she remotely resents this casting, particularly in the highly anticipated BBC/Hulu adaptation of Sally Rooney’s Normal People, in which she plays Lorraine, Connell’s mum. “I was over the moon when I got that call,” she says. “I would have played a cat in that TV show! Just to work with the likes of Lenny, Sally, and Alice.”

For anyone who hasn't been obsessively reading up on this show (there must be one, maybe two, of you out there), Greene is referring to Lenny Abrahamson, the Oscar-nominated director who worked on the first part of this series, Sally Rooney, the author of Normal People, and Alice Birch, the celebrated screenwriter.

Greene and I are chatting away via phone on a typical Monday morning in lockdown. By that I mean it could just as well be any other day of the week. “It’s so surreal,” the Irish actress says of the global public health measures and COVID-19. Greene, who grew up in Cork, was working on Frank Of Ireland (a new comedy series for Channel 4 and Amazon Studios by brothers Brian and Domhnall Gleeson) in Belfast when lockdown put a stop to filming and brought life as we know it to a standstill. She and her boyfriend decided to stay put. “[Belfast] seems a little bit less hectic than London,” she says, describing the forest walks that are turning into a daily ritual, as well as the drawing, colouring, and “perhaps a little too much wine” (aren’t we all?) she’s finding solace in.

Like the rest of us, Greene is biding her time: waiting for Normal People to drop in its entirety in order to watch it in one sitting, exactly as she did with Rooney’s novel. “It is very true to Sally’s writing,” she says of the adaptation, which Birch wrote alongside Rooney. “I think people are going to be really happy with the show.” Greene has a knack for turning any and all observations about her work into a reflection on everyone else’s – not in a self-deprecating way, but more like she can’t quite believe her own luck.

“I had a real fangirl moment when I met her,” she confesses of Rooney. “I was so nervous, I just vomited compliments at her and ran away. I'm looking forward to meeting her again and being a little bit cooler.” Birch gets much praise, too: “She’s an incredible writer; everything was so detailed and, at times, felt more like prose [than a screenplay].” Paul Mescal and Daisy Edgar-Jones, of course, are also celebrated: “I think they are going to be huge stars. I can’t wait for the world to see them.”

Greene is a star in her own right, too. In the West End alone she’s starred in Jez Butterworth’s celebrated The Ferryman, and The Old Vic’s Woyzeck, the latter opposite John Boyega. On Broadway, she was nominated for a Tony for her role in The Cripple of Inishmaan with Daniel Radcliffe. Last October she took over our TV screens as detective Cassie Maddox on BBC One’s eight-part drama Dublin Murders, another adaptation, from Tana French’s popular book series. She also appeared in Sky’s Penny Dreadful and the CBS crime drama Ransom. Her proudest achievement to date? Rosie. Scripted by Roddy Doyle and filmed in 2018, the film follows a mum of four over 36 hours. Having been left homeless when their landlord sells their home, Rosie and her partner struggle to find a place to stay and shield their young family from the harsh realities of homelessness.

“I think about families like that all the time,” Greene says, referring to Ireland’s ongoing housing crisis, “especially at the moment you know... Nothing has changed in Ireland; it's still as bad as it was when we made the film.”

Rosie and Normal People's Lorraine are two sides of the same coin in some ways. Both are raising families in 21st-century Ireland, dealing with or having dealt with difficult circumstances themselves. Connell and Marianne’s relationship may be the beating heart of the show and novel, but Lorraine looms large in both their lives, sharing their “outsiderness,” as she describes it, particularly with Marianne. “I think they maybe suffered a similar kind of outcasting in school,” Greene reasons. “And I think she sees herself in Marianne. People probably turned on Lorraine when she became pregnant at such a young age.”

Lorraine and Connell’s relationship is a joy to watch on screen: at times complex, but also so inextricably familiar. “It’s always been just the two of them and though they’re the best of friends – because they are so close in age – she doesn’t hold back. But she's also very respectful of him and his space,” she says. “Lorraine is a smart, compassionate woman, and a great human being. It was a real joy, playing someone that good every day,” perhaps referencing her Dublin Murders days when things were, well, less bright. Even when she’s angry and bollocking Connell, you can’t help but admire and respect her, and, by extension, Greene’s portrayal also.

The 12-part drama may not raise awareness as Rosie did about Ireland’s housing crisis, but Greene hopes it will reach a younger generation and teach them a thing or two. “I think it can be really important for a younger audience to watch this and see what falling in love can look like. We're always too afraid to show our emotions in case you get hurt, but, is that not the whole point of living is? To fall in love, to get hurt, to get over it, to fall in love again.” Come April 26, we’ll all be falling for Normal People.