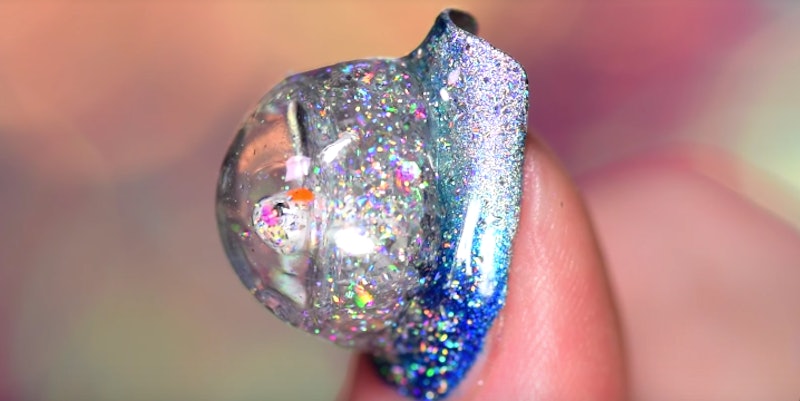 From selfie nails complete with hair to the wire manicure trend, nail art has gotten pretty wild as of late. Now, snow globe nails are trending for the holiday season, proving a mani sans 3D embellishments just won't cut it these days.

It's clearly not enough to top your winter nails with a simple, three dots snow man design. The only way to truly pay homage to Frosty the Snowman is to build him on your nail bed and trap him within a glittery snowstorm. Enter snow globe nails. Requiring layers on layers of lacquer and some serious DIY skills, they're practically the aquarium nails trend meets the 100 coats of polish challenge.

Canadian vlogger Cristine Rotenberg, known by her Simply Nailogical YouTube channel, certainly wasn't the first beauty guru to showcase these elaborate nails, but her recent snow globe tutorial put the trend back into the spotlight. Taking to social media to show off her latest holiday ready nails, the queen of holographic pointers built an actual snow man on her thumb. With nearly 2.5 million views and counting, it's obvious that snow globe nails are intriguing the masses once again, whether they're practical for everyday wear or not.

So how exactly does one construct a globe stuffed with glitter onto their nails? Cristine's play by play proves patience, craftsmanship, and all the glossy gel top coat you can secure is key.

Borrowing tips from a snow globe tutorial by Absolute Nails, she uses the nozzle of an applicator bottle and saran wrap as a mold for the sphere. While Absolute Nails creates the clear globe with builder's gel — fancy schmancy sh*t Cristine declares she knows nothing about — Cristine uses two coats of glossy gel top coat instead. Her globe may not be as sturdy, but the gel lacquer certainly does the job.

If you guessed that the snowman's figure was also created using gel top coat, then you'd be right — the glossy gel finisher is the main ingredient for successful snow globe nails à la Simply Nailogical. Painted using white polish, with micro dots for eyes and an orange tip for a carrot nose, the lacquer is then cured to keep the mold together.

A blue to silver ombre via holographic polish makes for the prettiest base on which the snowman sits. Then, extra does of glossy top coat are added to ensure Frosty remains secure.

All that's left is to attach the globe, which Cristine does while leaving a small opening in the structure so that glitter and clear liquid can be added to the sphere. The nail art guru then uses a concoction of iridescent glitter and holographic powder to create the most majestic snowstorm mankind has ever seen. If you're a lover of all things sparkly, it's sure to give you major feels.

To make the glitters float, Cristine advises using an eye dropper to inject baby oil into the sphere. Seal the hole in the globe up and there you have it — some of the most mesmerizing winter nails to ever grace the internet.

Although the finished result is reminiscent of the bubble nail trend that had the internet totally divided, this mani is quite a looker. Whether you're into the design or not, you have to admit that it's pretty darn creative. Plus, any mani with loads of glitter is always a winner.

With that much time and effort put into a nail design, one can only applaud the true DIY skills at work here. Props are in order for Cristine and every other mani lover to nail (pun intended) the quirky, but impressive trend.