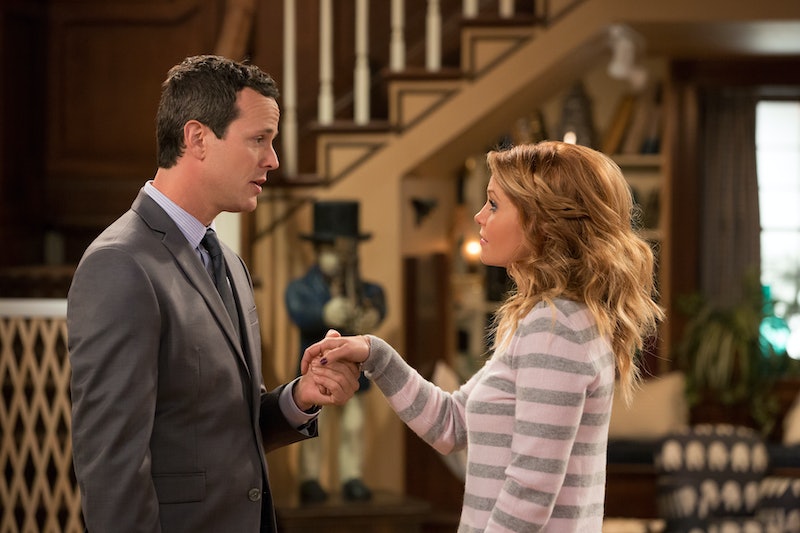 Spoilers ahead for all of Fuller House Season 5, Part 1. It only took nine seasons, 151 episodes, and an entire show reboot but Steve and D.J. finally got engaged on Fuller House. The show has been leading up to this moment for literal years (decades, if you include the Full House run time), and the big moment finally happened in Episode 9 of Fuller House Season 5. The proposal catches viewers off guard when it finally does happen, because the big dance flash mob seems like it's originally a chance for Fernando to re-propose to Kimmy. But that was just a ruse to keep D.J. from suspecting the truth.

Steve and D.J. first met in Season 5 of Full House and they've had all kinds of ups and downs since then. Steve acknowledged all this in his proposal speech.

"We first met 27 years ago, and my life has never been the same. The good times with you were some of the best of my whole life. I don't know how we lost each other, but somehow we found each other again. Life pulled us apart once, I never want that to happen again. I never want to miss another moment with you and Jackson and Max and Tommy. You're the last thing I think about when I fall asleep at night, and I would be the happiest man in the world if yours was the first face I see when I wake up every morning."

Of course, that doesn't quite get into the nitty gritty of all the bumps in the road for this couple. This engagement was a long time coming, and so much stood in its way for the longest time. On the original Full House, Steve and D.J. broke up as he headed off to college while DJ was still in high school. The duo reunited in the finale when he showed up to take her to prom. But, that grand gesture wouldn't last. When Fuller House picked up, D.J. was fresh from losing her firefighter husband Tommy. Even as she was pursued by both her veterinary co-worker Matt and a newly reappeared Steve, D.J. chose not to date either one by the end of Season 1. Instead, she chose to focus on herself for the time being.

By Fuller House Season 2, D.J. was ready to make her choice — Steve. Only she didn't get a chance to tell him that before he started dating someone new named C.J.. Matt also got a girlfriend for a brief time, but then he broke up with her to go after D.J.. Then Matt and D.J. started dating, further putting distance between D.J. and Steve.

Season 3, Part 1 ended with Matt telling Stephanie he planned to propose to D.J., but also with D.J. accidentally revealing to Steve that she still had feelings for him. She was wearing an eye mask and thought she was talking to Kimmy, but Steve was the one sitting next to her. Learning that D.J. still had feelings for Steve put him in a real conundrum as he was on his way to marry C.J. at the time.

In Part 2, Steve and D.J. both ended their respective relationships. Steve called off his wedding (mid-vows) and D.J. said yes to Matt's proposal but then backed out. But D.J. and Steve didn't just get together right then. They took a month to process the ends of their previous relationships so as not to bring any baggage into one together. Steve also then briefly moved to Los Angeles to work for the Lakers, meaning that D.J. and Steve had to start their new relationship long distance. It started to feel like maybe they would go on like that forever.

Then, through all of Season 4 and most of Season 5, they just went on dates together and slowly reconnected. And, after all that, Steve finally, finally proposed. Although it took ages to get here, this was always creator Jeff Franklin's plan. He told TV Line that he didn't like that the two had broken up in the original Full House after he'd stepped down from the series, so he wanted the reboot to make that right.

"I thought Steve and D.J. were a really great couple and the audience was very invested in them. The fact that the producers chose to break them up, and the storylines that followed, were not big crowd-pleasers. That always bothered me," he said. "So I looked at [Fuller House] as an opportunity to let Steve and D.J. get back together someday and have a chance and see what happens.”

In Part 2 of the final season, wedding bells will be ringing not just for Steve and D.J., but also for Stephanie and Jimmy and Fernando and Kimmy. The three ladies decided to have a triple wedding together since they already share everything else. That's fine and all, but no one waited nearly three decades to see Kimmy and Stephanie marry people that fans only just met a couple of seasons ago. The real spotlight should be on Steve and D.J.'s nuptials. They — and the fans who have endured the ups and downs ha've gone through so much to get here.

More like this
Ashton Kutcher Wants Danny Masterson “To Be Found Innocent” In Rape Retrial
By Jake Viswanath
The Banned 'Friends' Ad Shows Monica As You’ve Never Seen Her Before
By Sam Ramsden
This 'Gossip Girl' Wardrobe Error Has Gone Viral On TikTok
By Alyssa Lapid
'Abbott Elementary' Fans Probably Missed This 'Parent Trap' Easter Egg
By Sam Ramsden
Get Even More From Bustle — Sign Up For The Newsletter
From hair trends to relationship advice, our daily newsletter has everything you need to sound like a person who’s on TikTok, even if you aren’t.