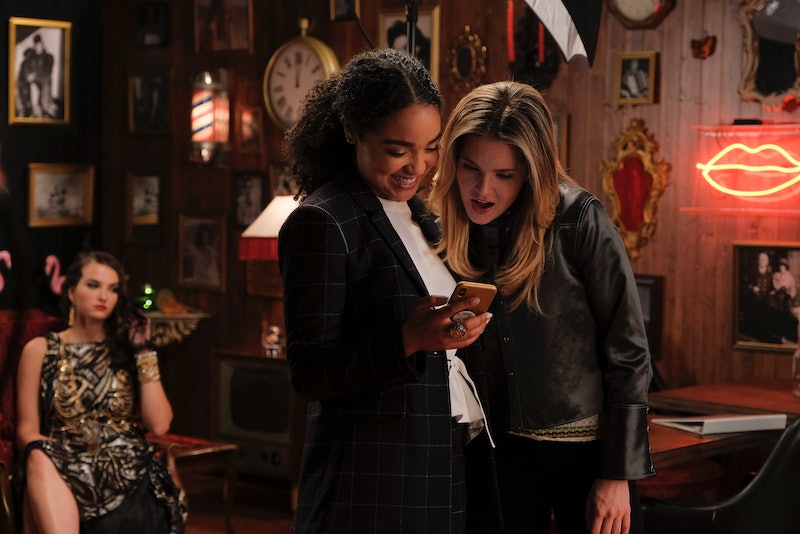 Love may be important for the women of The Bold Type, but following the career growth of Kat, Sutton, and Jane at Scarlet is even more compelling. Kat is now a director and runs the social media department; Jane is a writer, and she’s found her path after a few bumps and a major award; and Sutton is slowly climbing the ranks, probably a little more slowly than she would want to. But Sutton’s job on The Bold Type is totally inspiring, and watching her climb the corporate ladder is so fun and empowering to watch.

Sutton started her job at Scarlet as the assistant to the Executive Editor, which was absolutely not where her passion was. But she lobbied hard for a job as a fashion assistant for Oliver, the head of the fashion department, even though it was a cut in pay, which was way hard to accept. Sutton agonized over that decision, and it’s fair — an assistant’s salary isn’t much to begin with, so to get paid less of nothing in an expensive city like New York isn’t exactly ideal. It took enormous courage for Sutton to take that leap of faith, and once she got the job, it was off to the races in the fashion closet.

It hasn’t been easy, but for Sutton, it sure seems like it’s been worth it, especially since it all culminated in her getting a spot on the Scarlet roster that gets to go to Paris Fashion Week (yes!). Sutton’s up-and-down jumping, “I’m gonna throw up” reaction was something to behold. She has a lot of responsibility with Oliver, and she’s really using her skills and drive to do something good for him and the department. Advancing a career is hard work, and there’s never any road map for it. But watching Sutton fail, flail, and succeed is inspiring and totally relatable. She’s trying, and she’s working, and it’s fabulous. In honor of Sutton and her aspirations, let’s relive some of her best and biggest career moments.

Realizing She Could Climb At Her Own Pace

Scarlet has fallen into the influencer trance, and Sutton fell into her own with Brooke Langley, an influencer who pretended to be her friend and then basically just used Sutton’s expense account to pay for her cocaine. Sutton felt the need to hang with Brooke to advance her connections and her career, but after too many nights of partying and just generally feeling bad about herself, Sutton realized she needed to grow organically and not use Brooke as a stepping stool.

Taking A Chance With Adeena

Sutton did Kat a favor by using Adeena in an accessories photo shoot, and while it was a risk and did not at all mesh with what Oliver wanted, the images that Sutton and Adeena shot were breathtaking. Even Oliver liked them and complimented her vision, even if it didn’t match his. Sometimes, you just have to go with your gut and take a chance.

Trying To Negotiate Her Salary

Sutton was thrilled to receive her fashion department job, but the salary was severely lacking — it was less than she currently made at Lauren’s desk. She tried to negotiate this salary with Oliver, who didn’t have any more money left in his budget. So, she asked for special perks instead, and Oliver obliged. According to The Muse, only 7 percent of women negotiate a salary offer, but 57 percent of men do. Negotiating is one big way to close the gender pay gap, and Sutton sure tried to close hers.

Influencer Brooke promised the world and a certain handbag to Sutton, and when all of that fell through, Sutton went on a mad scramble for Oliver not to know she was going to fail. Turns out all she needed to do was be honest with Oliver — he picked up the phone and it was all resolved in two minutes. Oliver told Sutton that they were a team and they help each other, and it’s a comforting feeling to know that no woman is an island.

Standing Up For Herself

When fellow stylist Mitzi was spreading the news that Sutton and Alex, a Scarlet writer, hooked up, Sutton was thrown. She didn’t want people to think she was getting good assignments because of a one-time fling, and it made her doubt herself. But then Sutton stood up to Mitzi and told her to cut the slut shaming and that it wasn’t cool to spread rumors, and it totally invigorated Sutton and gave her mojo back.

Sutton has consistently been killing it when it comes to getting what she wants out of her career and not compromising too much of herself. While all the women of The Bold Type are inspiring in their own way, watching Sutton figure out her way, with not a lot of family support, is something we could use a lot more of on television.