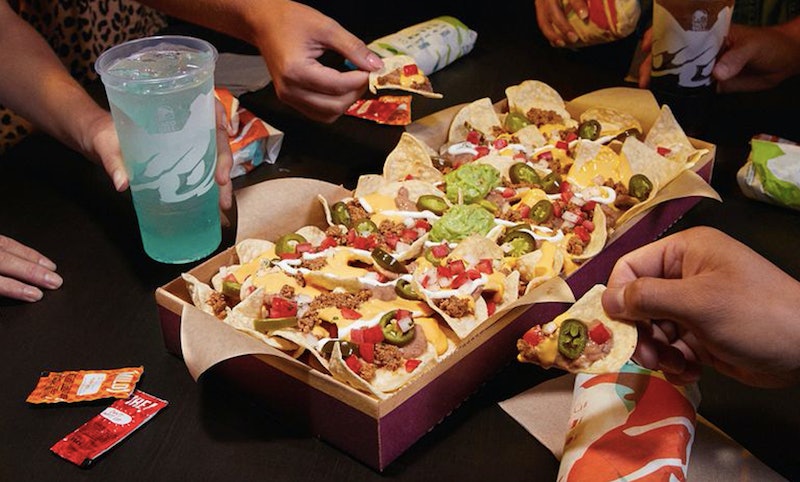 If a lot of the strife in your life comes from deciding who gets the last nacho (and I know it does in mine), then this is a very lucky day for you indeed. Because according to Delish, now there is a Taco Bell Nachos Party Pack in testing phases in Birmingham, Alabama locations for just $7.99. It's safe to say I've never wanted anything to pass a test so much in my entire life.

If you're not already familiar with the Taco Bell Party Packs, they are a beautiful and innovative solution to your biggest problem — too many people, not enough tacos. The 12-packs allow you to order food for groups in one easy swoop and the idea of adding nachos into the mix just makes me feel all warm and fuzzy inside. Of course, just like their classic nachos, you can expect tortilla chips with refried beans, cheese sauce, sour cream, pico de gallo, guacamole, and jalapeño — and the version being tested seems to come with beef. But, as hacking the Taco Bell menu is really easy and they're always up for customizing, I'm sure you can skip the ground beef to make a veggie version.

If you're lucky enough to be in Birmingham, you should definitely swing by and try this giant pile of nachos. For the rest of us, we'll have to make do with the Taco Bell Party Packs that are already out there and live with hope in our hearts.

I have to say, it seems like whoever is in charge of big changes at Taco Bell hasn't been missing a single beat — the company has taken us all on a rollercoaster of emotions over the past few months. There have certainly been plenty of high points, with the Taco Bell hotel launch and a back to school collection. The chain is even testing three new breakfast burritos — the king of all breakfast foods — one of which has an entire hash brown shoved right in the center, as all breakfast foods should.

But there have also been emotional moments in Taco Bell's recent history — namely, the removal of nine treasured menu items from our awaiting mouths, including the Cool Ranch and Fiery Doritos Locos Tacos. Of course, they have tried to make amends with the sweet, sweet Taco Bell vegetarian menu that rolled out nation-wide, including dedicated boards just for veggie options to make ordering a breeze. If that's not enough, they've also given us the Toasted Cheddar Chalupa, with a cheddar-baked shell ready to delight you — I told you it's been a rollercoaster.

It's kind of a surprise that a Nacho Party Pack hasn't been a thing before. Out of all of the Taco Bell menu items, nachos make the most sense to make in giant batches to cater for groups of people. In fact, I think the Nacho Party Pack could save a few friendships. But first, it has to become a real, actual menu item. So let's keep our fingers crossed that this big pile of goodness will pass the test — because the country needs the Nacho Party Pack and they need it soon.