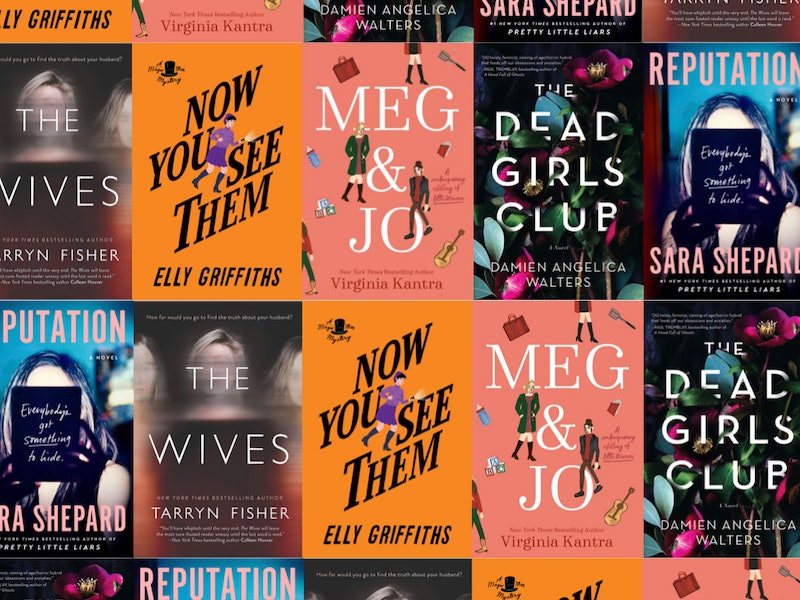 December is finally upon us, folks, which means you only have 31 more days — or fewer! — to complete your reading challenges for 2019. To help you out, I've picked 17 of the best new books of December 2019 for your reading enjoyment. Whether you're playing reading catch-up or right on track, you won't want to miss out on these great reads.

This has been a great year for books, with beloved authors — including Margaret Atwood, Ta-Nehisi Coates, Carmen Maria Machado, Angie Thomas, and Ocean Vuong — releasing new titles to stores. It's also been a banner year for debut writers, with first releases from Camryn Garrett, Sarah Lyu, Tamsyn Muir, Brittney Morris, and Etaf Rum, among others.

But 2019 has a whole lot more to offer avid readers. Still to come are the sequel to one of last year's most lauded novels, a posthumous collection of Toni Morrison's work, and some pitch-perfect new takes on your favorite classic novels. Seriously, you're going to love what December 2019 has to offer, so don't close the book on your reading year just yet.

To make your TBR list even longer, here are the best new books of December 2019:

Children of Virtue and Vengeance by Tomi Adeyemi (Dec. 3)

The second novel in Tomi Adeyemi's Legacy of Orïsha Trilogy, Children of Virtue and Vengeance picks up where Children of Blood and Bone left off. Zélie and Amari have restored the magic that left the world when the maji were massacred, but now they have a new and different problem — the ruling powers, who happen to be their greatest enemies, have had their magic restored, as well. Can Zélie and Amari find a way to unite the people against the state?

An oft-maligned, minor character from Pride and Prejudice takes center stage in this debut novel from Molly Greeley. Knowing she was headed for a spinster's life, Charlotte Lucas leapt at the chance to marry Mr. Collins, the clergyman who was to inherit the Bennet family's estate. Years later, Charlotte Collins is the wife of an awkward minister, mother to a delightful child, and a woman who feels utterly unfulfilled. When she makes the acquaintance of an attractive local farmer, however, Charlotte must reassess her old decisions — a reconsideration that will determine the success, or failure, of her future.

Eva Bruhns has big plans for her life, plans that could get off the ground if only her rich boyfriend would propose already. But Eva's plans are upended when she's hired to translate in the Frankfurt Auschwitz trials. Listening to testimony about a war she hardly remembers, Eva grows increasingly dedicated to bringing the Nazis to justice — and increasingly suspicious of her parents' and boyfriends' lack of support for her work.

A Madness of Sunshine by Nalini Singh (Dec. 3)

From the author of the Guild Hunter and Psy-Changeling series, A Madness of Sunshine is one of the year's must-read thrillers. The once tight-knit community of Golden Cove, New Zealand is torn apart by the disappearance of a young runner. Investigating the case are a transplanted detective and one of Golden Cove's prodigal daughters — each of whom has a past and an insider's knowledge of the town's dark underbelly. This isn't the first disappearance in Golden Cove, but hopefully, it will be the last.

The Measure of Our Lives: A Gathering of Wisdom by Toni Morrison (Dec. 3)

"We die," said Toni Morrison during her 1993 Nobel lecture. "That may be the meaning of life. But we do language. That may be the measure of our lives." Taking its name from this quote, The Measure of Our Lives collects the best quotes from across Morrison's body of work. If you're looking to end the year on an uplifting, energizing note, this is it.

Virginia Kantra's Meg and Jo pulls the four March sisters forward into the modern day. In this retelling, the two eldest sisters are living their best lives as a stay-at-home mother and a successful journalist. But when things begin to go sideways for both of them, and their mother's sudden illness calls them home to celebrate Christmas in North Carolina, Meg and Jo will be forced to take a step back from their lives and figure out what, exactly, they truly want.

Now You See Them by Elly Griffiths (Dec. 3)

Two years after she published The Vanishing Box, Elly Griffiths returns to her Stephens & Mephisto Mystery series with Now You See Them. Set a decade after the events of The Vanishing Box, this new novel sees the former investigation partners separated by an ocean and a continent. But when Edgar Stephens and Max Mephisto reconnect at the funeral of an old friend, they get pulled into a missing-persons case involving a young girl. Then Max's daughter, Ruby, disappears, and everything changes.

From Pretty Little Liars author Sara Shepard comes this new thriller about a college campus divided by an email leak affecting tens of thousands of people. With faculty, alumni, and current students and staff now able to sift through their friends' and colleagues' secrets and lies, Aldrich University is set abuzz with rumors. Then, one of the men most impacted by the leak is murdered, and his sister-in-law — an investigative journalist and native of the town — begins to investigate, hoping to catch the killer before they strike again.

The Rise of Magicks by Nora Roberts (Dec. 4)

Nora Roberts will see the final novel in her Chronicles of the One Trilogy land in stores this December. The Rise of Magicks follows Of Blood and Bone heroine Fallon Swift as she works to save government prisoners in the wake of a epidemic that wiped out life as we once knew it and restored magick to the world. As The One, Fallon was born to save the world — but can she do it alone?

Thirty years ago, Heather was part of the Dead Girls Club — a group of girls who reveled in stories about serial killers, final girls, and murderous ghosts. Thirty years ago, Heather's friend Becca died because of the Club — because she believed so strongly in an urban legend called the Red Lady that she died to prove she was real. When a mysterious package draws Heather back to the events of that night, she knows two things: the Red Lady is real, and she — Heather — was the one who killed Becca.

The third book in Cat Sebastian's Regency Imposters series, A Delicate Deception centers on Amelia and Sydney — an odd duck from the London social scene and the stranger who interrupts her strolls through the country — whose burgeoning relationship is shattered by the revelation that Sydney owns the manor Amelia has let. Can they trust one another again, or has a well-meant lie irreparably destroyed what might have been?

Regretting You by Colleen Hoover (Dec. 10)

Morgan's relationship with her 16-year-old daughter has become fraught. Clara yearns for independence from her overbearing mother. They've been held together for years by husband and father Chris, but when he dies in an accident that also claims the life of Morgan's sister, Jenny, both mom and daughter are left reeling. Searching for purchase in a crumbling world, Morgan falls in with an old crush — Jonah, Jenny's fiancé and Chris's high-school best friend — while Clara grows closer to Miller, a boy her father disapproved of.

This follow-up to The Wicked City finds Ginger Kelly living in Florida with her sister, Patsy, and her ex-G-man lover, Oliver Anson Marshall. When the Bureau of Prohibition puts Gin's boyfriend back to work, he subsequently disappears, and it's up to her to rescue him. More than 70 years later, Ella moves into Gin's old apartment in New York City, and becomes obsessed with finding out more about the previous tenant, who mysteriously disappeared so many years ago.

The Wonderful by Saskia Sarginson (Dec. 10)

American tomboy Hedy is uprooted, along with her mother and twin brother, when her father's military career requires the family to move across the pond to England. She's trying to make the best of it, but then tragedy strikes, leaving Hedy alone in a strange country. Trying to make sense of her life in the wake of tremendous loss, she decides to finish a story her brother had begun writing before his death. As she sets about the task, however, Hedy begins to realize that the story might explain her family's untimely deaths.

New in paperback after a July digital release, Margarita García Robayo's Fish Soup contains two novellas and the Casa de las Américas Prize-winning short-story collection, Worse Things. If you're looking for a great compilation of short fiction from a celebrated author to round out your reading year — or kick off the next one — this is the book to buy.

The other wives of her polygamist husband become the subject of deep fascination — fringing on obsession — for a Seattle homemaker in this new novel from I Can Be a Better You author Tarryn Fisher. The central figure in this story only sees her husband on Thursdays, and she's been satisfied with their arrangement. But when she finds a note in his pocket from a woman named Hannah, she grows restless, and begins to investigate. Who are the other wives, whom she knows only as "Monday" and "Tuesday"? And why does Hannah have mysterious bruises, when she knows her husband as a gentle and caring man?

Meg has turned her talent for hand-lettering into a business venture, designing planners, journals, and other stationery in New York City. When she's hired to design the wedding programs for a couple she knows will divorce, she slips in a tiny warning sign, unable to help herself. One year later, Reid, the husband from the doomed couple, turns up on her doorstep. He noticed Meg's signal flare, and he wants answers.