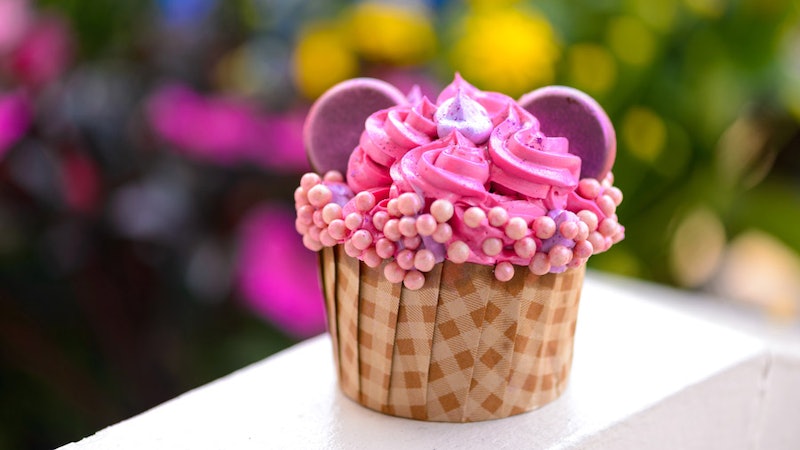 Confession: I will never, ever get tired of seeing beautifully presented desserts. Yes, even if I live nowhere near where those desserts are made. Case in point: The Disney parks’ recently released “Imagination Pink” desserts. They are gorgeous. They’re probably tasty, too, although alas, I cannot attest to that fact, as I am not currently near a Disney park. And even though “Imagination Pink” might not be a color trend I’ve heard of before (is it like “fetch?” Is Disney trying to make “fetch” happen?), I am absolutely willing to roll with it, because, I mean… ugh. It’s all just so pretty.

The Disney parks have been capitalizing on color trends for quite a few years now. When rose gold mouse ear headbands first hit the merch stands during the summer of 2017, they piggybacked off of the general rose gold trend that had already been sweeping the fashion and beauty worlds for some time — and people went berserk for them. Other rose gold Disney gear followed, including spirit jerseys and Magic Bands… but Disney didn’t stop there. They ran with it, giving such other colors as millennial pink and “Potion Purple" the same treatment.

Each time they’ve broken out a new color trend in the merchs stands, the Disney parks have put out a whole bunch of beautiful desserts adorned with the same colors — and “Imagination Pink” is no different. Tons of “Imagination Pink” merch has recently hit both the parks and shopDisney, so first, you can get yourself some bright pink ears… and once you head to one of the parks, you can get yourself a treat to go with it. A whopping 17 distinct, perfectly pink desserts are now available across both Disneyland in Anaheim and Disney World in Orlando, and they’re all as Instagrammable as they are delicious.

The Disney Parks Blog has kindly released a guide to exactly what’s available and where you can find them all, too — so if you’re heading to Disney soon, here’s where to go to get your mitts (and your taste buds!) on an Imagination Pink dessert: