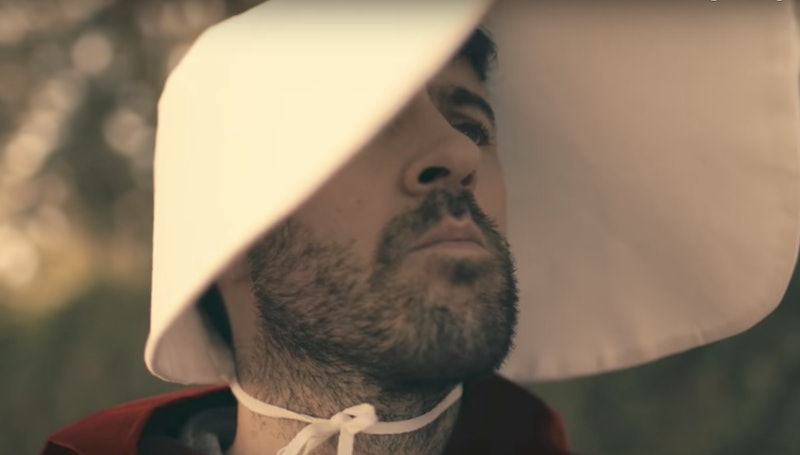 After the nail-biter/existential crisis/"wow I wish this were further from reality than it actually low key is" that was the entire first season of The Handmaid's Tale on Hulu, we're getting a Season Two a lot faster than expected in the form of the "Handman's Tale" by Funny Or Die. Finally, a show that speaks to the systemic oppression and marginalization of upperclass white men!

The trailer starts in the harrowing landscape that is modern America, where feminists run wild with their Nasty Woman t-shirts and insane demands for all sorts of apocalyptic nonsense, like access to birth control, equal pay, and representation in media that doesn't cater to the male gaze. A war torn world where men are chastised and held accountable for their transgressions against women, from public transportation to the board room to the bedroom (oh my!). An appalling domain where women are not only the leads in Ghostbusters, Star Wars, and superhero smash box-office hits, but also demand MERCHANDISING for them that they can BUY and proudly display in their HOMES.

It is truly a devastating blow to the Handmen of America, whose plight are depicted in the first ~sneak peek~ of the series below.

The series follows the woeful tale of Manfred, a broski fallen from grace in a progressive era promoting equality and elevating the voices of marginalized groups.

"Before the war, I was a Senior VP," he tells us. "Now I'm a Senior VP with some female colleagues."

Together he and his fellow Handmen struggle to form a Resistance, forced to the underground of 4chan and reddit to expression their douchepinions. Will they survive the Herculean tasks that lay before them, including and not limited to keeping their legs to themselves on the subway, refraining from policing women who breastfeed their children in public out of literal necessity, and not telling Brenda from payroll that her tits look nice today? Only time and white male privilege will tell.

Unfortunately, the show is only available on DudeHulu, so you might have to shell out some extra money for the new subscription. But considering women still make 77 cents on the dollar to men (and 63 cents for black women, and 54 cents for Latinas!), the Manbobs and Mansteves of the world can probs afford it.