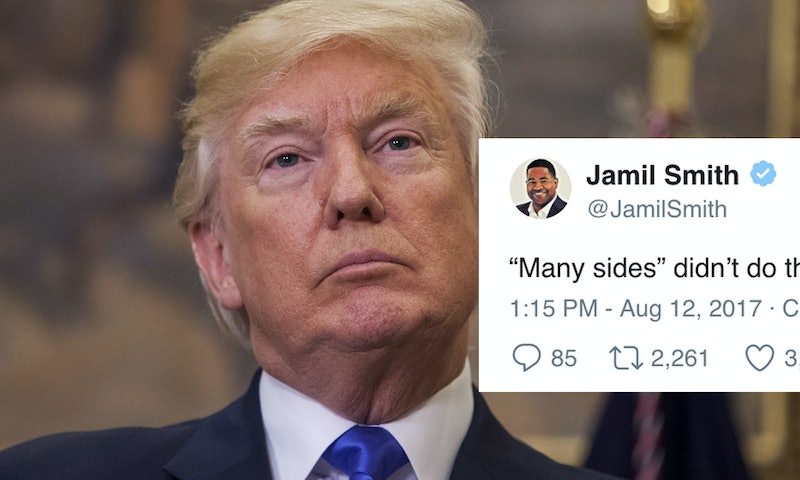 On Saturday afternoon, during heated protests and counter-protests between white nationalist and neo-Nazis and anti-racists in Charlottesville, Virginia, somebody drove a car into a group of the anti-racists demonstrators, reportedly leaving multiple people injured, and at least one person killed. The horrifying incident was captured on video, and the footage is already all over social media and mainstream media alike. President Donald Trump eventually responded, both in a tweet and a brief statement, and many people were furious with what he said ― this one tweet about Trump's speech, in particular, explains pretty clearly why you people are horrified by his middle-ground response.

The tweet, from journalist Jamil Smith, perfectly expresses the thing that left so many people ― especially progressives and anti-racists ― galled by Trump's short statement on the Charlottesville violence on Saturday, delivered as an aside within a larger speech about the economy and his trade policies. Namely, Trump failed to specifically condemn white supremacists and neo-Nazi elements that descended on the city, opting instead to decry violence, division, hatred, and bigotry "on many sides."

To so many people, the message was clear ― the president doesn't have any unique problem with white supremacy and racism, at least not to the point that he felt compelled to directly name them. And as Smith noted, "many sides" weren't at the wheel of that car.

Here's what Trump actually said ― he didn't maintain focus on the violence in Charlottesville for more than a few minutes, eventually segueing back into boasting about "record employment" under his administration, and touting recent U.S. investments by FOXCONN.

We are closely following the terrible events unfolding in Charlottesville, Virginia. We condemn, in the strongest possible terms, this egregious display of hatred, bigotry, and violence ― on many sides, on many sides. It's been going on for a long time in our country. Not Donald Trump, not Barack Obama. It's been going on for a long, long time. It has no place in America, what is vital now is the swift restoration of law and order, and the protection of innocent lives.

Simply put, in the aftermath of an absolutely harrowing attack on anti-racist demonstrators, Trump opted to play the "both sides do it" card. And with so much of America watching and waiting to hear what he had to say, it was about as inflammatory and offensive an example of presidential fence-sitting as you're ever going to see.