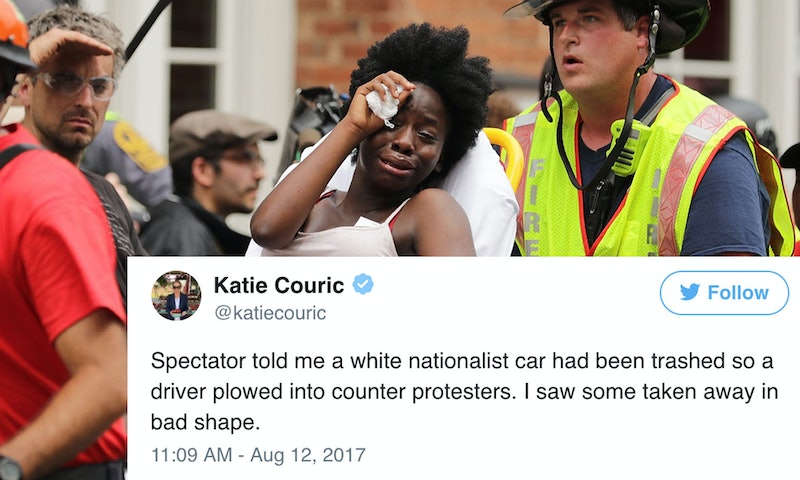 Violence and chaos broke out on the streets of Charlottesville, Virginia on Saturday during a white supremacist "Unite the Right" rally. Tensions were already bound to be high after a Friday night demonstration at the University of Virginia, wherein proud white nationalists marched through the school's campus carrying torches, chanting racist and homophobic slogans, and getting into physical altercations with counter-protesters. By 11 a.m., Gov. Terry McAuliffe had declared a state of emergency.

On Saturday, hundreds of members of the "alt-right" and white supremacist groups like the Ku Klux Klan, Vanguard America, and Identity Evropa were met by hundreds of protesters and activists opposing their messages.

The scene was immediately strained with hostility, and the rally, which was set to begin at noon at Emancipation Park, was declared an "unlawful assembly" by police shortly before its scheduled start. According to CNN, the catalysts for this decision were fistfights and "screaming matches" unfolding in multiple locations.

Shortly before 2 p.m. EST, one "Unite the Right" supporter was captured on video plowing a car into a crowd of counter-protesters, injuring at least 10 pedestrians. Shortly after, Charlottesville Mayor Mike Signer revealed that one person had died.

Here are what some people on the ground at Charlottesville witnessed.

5. When The People You Hate Treat You Nicely...

8. Apparently This Was The Motive

9. No Question It Was Intentional

10. One Of The Witnesses

11. Trump Will Probably Ignore This

14. Calling Out The Police

16. Escalation From Tense To Terrifying

20. He Ended It With Anti-Semitism

President Trump held a press conference on Saturday afternoon to address the events in Charlottesville. “We condemn in the strongest possible terms this egregious display of hatred, bigotry and violence on many sides ― on many sides," he said. "It’s been going on for a long time in our country, not Donald Trump, not Barack Obama, it’s been going on for a long, long time.”

He further stated, “We wanna get the situation straightened out in Charlottesville and we want to study it. We want to see what we’re doing wrong as a country where things like this can happen.”

More like this
'The Capture' Is Finally Back – & S2 Looks Tense AF
By Sophie McEvoy and El Hunt
The Lionesses Are Calling For Equal Access To Football In Schools
By Sophie McEvoy
The Best Memes & Tweets About Rachel's Group Date On 'The Bachelorette'
By Alyssa Lapid
42 Black Owned Fashion & Beauty Brands To Support Today & Always
By Mekita Rivas, Shea Simmons, Kui Mwai and Dominique Norman
Get Even More From Bustle — Sign Up For The Newsletter