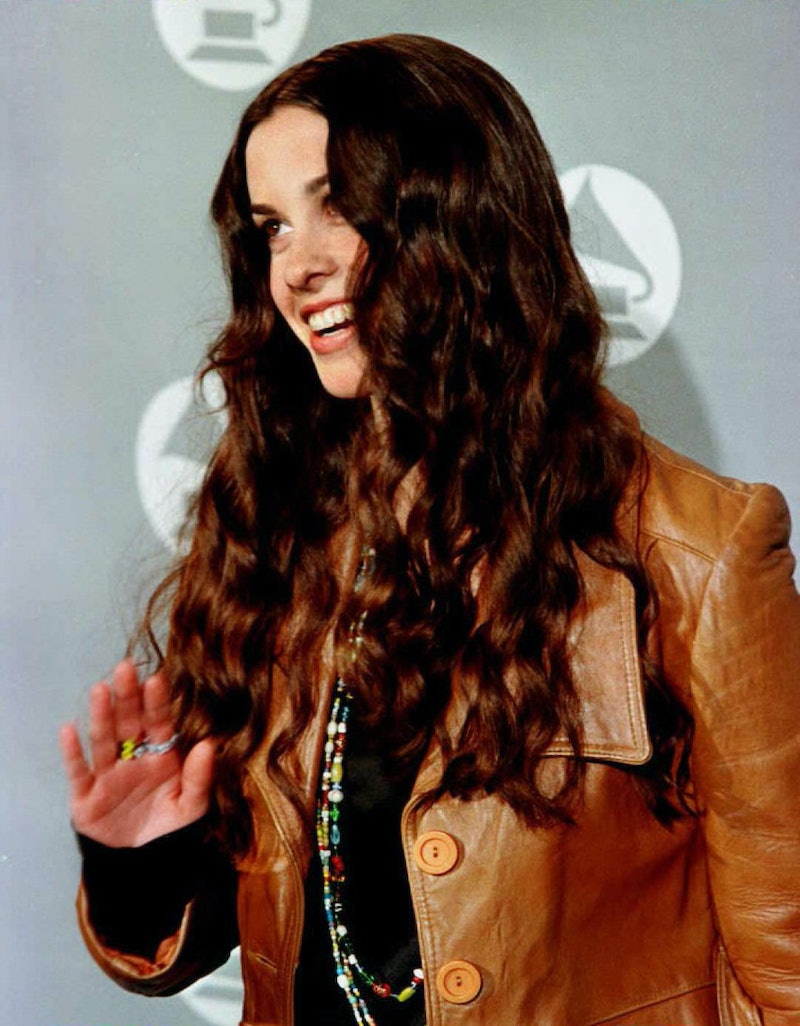 The 1990s were rife with angsty breakup songs. Yet, if you had to choose only one '90s breakup song to help you recover from the end of a relationship, then the answer is fairly obvious: Alanis Morissette's "You Oughta Know." Released at the halfway point of the decade, "You Oughta Know" made Morissette a star in the U.S., but, more importantly for your aching heart, it's full of that sweet righteous anger that one experiences after a breakup.

If a breakup song doesn't have me feeling a lot of emotions, I want nothing to do with it. And 1995's "You Oughta Know" is all about emotion, since it epitomizes that second stage in the five stages of grief: anger. (He had told her that he'd hold her until he died.) Morissette's rage toward her ex is palpable, and, while many breakup songs can be ambiguous (are you guys just fighting or do you want him back or what?), there's a definitive tone to "You Oughta Know" that makes it exceedingly clear that this is a breakup song — and Morissette is not doing well.

It doesn't matter that you may not have experienced exactly what Morissette is singing about in "You Oughta Know." That's because this song represents all the things a person would ever want to angrily say to an ex — and that's what makes it so universal. Sure, it's unhealthy, a little mean, and a bit irrational, but, as the singer articulates so well in this song, there's nothing rational about getting your heart broken.

Beyond the emotion that Morissette displays in "You Oughta Know," it's the best breakup song of the '90s for a number of other reasons. As I was under the age of 10 when "You Oughta Know" first hit the airwaves, my initial takeaway — as I pondered if I'd ever see Morissette's eyes under her veil of hair — was that she used some curse words. However, from 1995 to today, "You Oughta Know" has stood the test of time for not only children of the '90s who were perhaps too young to get what she was singing about, but also for people who loved the song in all of its glory back in the 20th century.

For example, the song still gets love from artists like Demi Lovato, Britney Spears, and Beyoncé, who have all performed it live. That's because, in many ways, it's a feminist anthem as well as a breakup song. Thanks to its frank lyrics about female sexuality, it was particularly empowering for women in the '90s and still is in 2017.

Yet, despite its staying power, the sound of "You Oughta Know" is quintessential '90s. The alt-rock pop song was influenced by the Seattle grunge scene made famous in the early 1990s by bands like Nirvana. Morissette also incorporated that '90s yodel in her raw vocal performance that can be heard in songs like The Cranberries' "Zombie." The song, which received mainstream success and helped earn the 21-year-old Morissette a number of Grammys, was young and fresh like her. With its attitude, explicit language, and use of the grammatically incorrect word "oughta," it has all the irreverence you'd expect from a 1990s pop hit.

One final great feature of this song is the fact that, if you own the album Jagged Little Pill (as you should), then you know the last track is a repeat of Morissette's iconic song. And, if you keep listening after a minute or so of dead air, a hidden track "Your House" plays. As no breakup is just pure anger and often includes sadness, this vulnerable track combined with "You Oughta Know" makes for the ultimate '90s breakup song combo.

So, next time you're going through a breakup and require some '90s nostalgia, listen to "You Oughta Know." It's pretty much the perfect '90s breakup song even before you start theorizing whether or not it's about Dave Coulier from Full House.