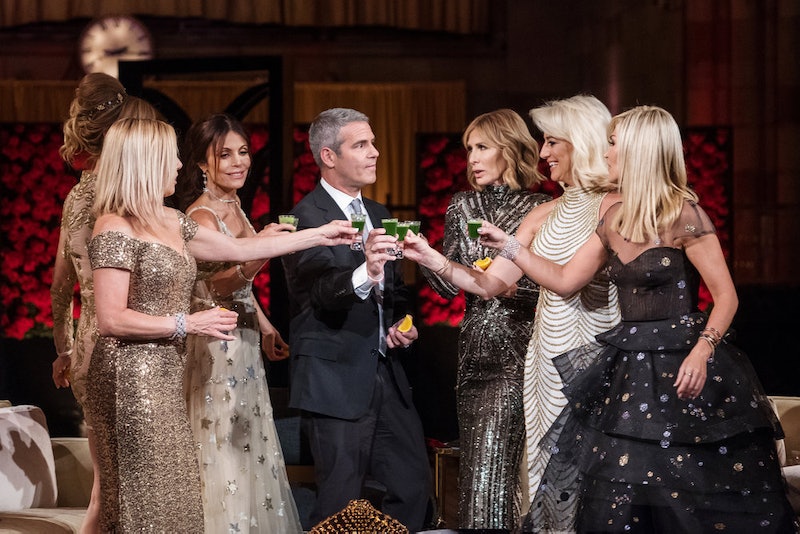 Season 10 of Real Housewives Of New York has been long and arduous, right? It was especially slowed down by full episodes of Carole and Bethenny screaming at each other, or Dorinda and Luann, who are usually so close, at odds. It was exhausting, frankly. Even the final reunion part was more of the same — Bethenny and Carole trying to speak over each other, Andy Cohen trying to corral them both, and the rest of the women (save for Sonja, who is really too pure for this world), ganging up on Bethenny, too, making it seem like she’s the only woman on Real Housewives of New York who has ever said anything bad about anyone, ever. But the most telling moment of the reunion was when Cohen asked the women, as he does each of the casts at their respective reunions, if they would do anything differently given the chance. Prepare yourself, because the Real Housewives Of New York reunion regrets revealed a lot about each cast member.

The other two episodes of the Real Housewives Of New York reunion were ugly, man. So ugly, in fact, that Andy Cohen had to step in and break up Bethenny and Carole’s fight in order to get the reunion moving again. He even sided with Bethenny, which is something that he usually doesn’t do. It’s in typically poor taste to end even the worst of screaming matches with a nasty note, so instead of continuing the massacres, Andy gave the women a chance at redemption by asking them to describe a moment of the season that they wish they could take back. One would hope that someone, somewhere, would have something nice to say about this dumpster fire season, and I suppose surprisingly, a few did.

Bethenny’s biggest regret was referring to Dorinda as “a drunk,” and she tells Dorinda she would take it back and she shouldn’t have said that to her. Dorinda is touched and says it means a lot, and I’m sure it does — Bethenny is tough, but she is very good at owning her stuff. She doesn’t mince words. The fact, though, that she doesn’t regret anything she said about Carole all season definitely means that these two are dunzo as friends.

Our newest cast member was mad at herself for losing her temper with Sonja, because she doesn’t like to get out of control “like that.” Tinsley is usually such a cool customer, and her apology may signify that she doesn’t want to leave the show or these new friends behind next season. This is all Tinsley has at the moment and she's not going to ruin it.

Sonja spun off of Tinsley’s apology to apologize herself. She said she regretted rehashing last season’s fight about the two of them living together, especially since it was done and buried and over and they were in a good place. “Opening that wound” was something Sonja wouldn’t have done again. Fair enough.

Longtime Real Housewives fans will be shocked at how self-aware Ramona became this season. First, in this reunion episode, she said she used to feel “entitled” to get the good hotel rooms, and that it was wrong of her. Then, when it came to her regrets, Ramona expressed remorse in not being more sensitive to Luann’s feelings post-rehab and post-divorce. Is this a kinder, gentler Ramona? Perhaps she’ll turn over a new leaf in Season 11.

Andy made the joke that Carole should have regretted calling him “full of sh*t” earlier in the reunion, but Carole’s actual regret was that she and Bethenny didn’t reconnect. Carole wanted to have a conversation with Bethenny post-show that didn’t happen and said that she "tried."

Honestly, it sounds here like Carole knew she wasn’t coming back to Real Housewives Of New York at that point. The way she spoke about her regrets, it like she was more upset that she had "failed" and not that she had lost a good friend. Since her and Bethenny won't be filming together, there is really no incentive to try and get along.

Dorinda continued the mea culpa train by saying she wished that she and Luann hadn’t gone at it like they did in Cartagena. “I didn’t mean to inflict the kind of pain I clearly did,” Dorinda says, and though she and Luann aren’t buds at the moment, she thinks they’ll get there. In the future. Like in Season 11?

A wrap-up of a long season of Real Housewives can be tough, but for most, the Season 10 reunion ended on a hopeful note. Carole has clearly moved on from her reality television phase, and now, the rest of the women will press on without her. Let's burn some sage and start over.