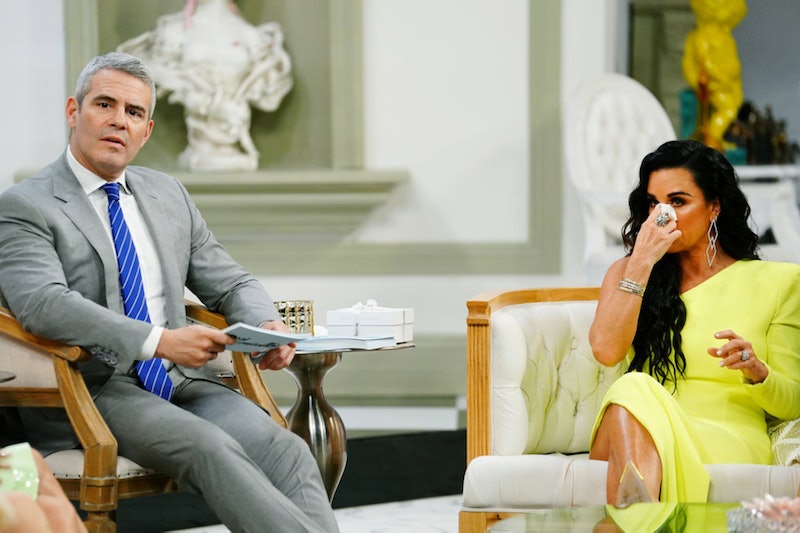 If there is one moment from The Real Housewives of Beverly Hills reunion trailer that will stick with me forever, it is not the first time we are shown the barrette-a-palooza on top of Dorit Kemsley’s head. It is not when Denise Richards asks if Camille Grammer is “on something.” It is not when Lisa Rinna exhales with glee after Kyle Richards claims Lisa Vanderpump “did a test run” before she filmed her lie detector scene. The moment I will never get over is the moment when the camera pans over to the feather-trimmed throw pillow where Lisa Vanderpump is supposed to be. The RHOBH Season 9 reunion literally saved her a seat on the couch even though, as she tweeted last month, “There was no chance of reuniting.” When I saw that pillow keeping LVP’s spot warm, a chill ran up my spine.

On Tuesday, June 9, E! News unveiled the preview for the three-part journey that is the RHOBH Season 9 reunion, which is set to begin on July 16. Now, assuming there is not some very sneaky editing going on, the Season 9 preview confirms what we already knew to be true: For the first time ever, LVP opted out of a RHOBH reunion.

So, how did we end up at a RHOBH reunion where a pillow is sitting in LVP's place? Let us sum it up as quickly as possible: When the Lucy Lucy Apple Juice/RadarOnline/John Sessa/John Blizzard rigamarole reached fever pitch in the middle of the season, the RHOBH veteran and ruler of Vanderpump Rules stopped filming with the rest of the cast. The season carried on without her, and fans wondered if she would return for the reunion to speak her piece. Before the reunion taped, LVP implied that she would not be coming back for the post-season special, but production remained optimistic and left an open seat for her just in case.

Sure enough, LVP decided the best course of action was to not only steer clear of the reunion, but quit the series altogether. As she said on an episode of the RHOBH after show, “To have five against one, you know, is just not a good place to be.” Again, we all knew she would not be there, but that empty place on the sofa next to Erika Jayne might be the first time it really hit me that LVP is done.

Yes, LVP has moved on from RHOBH Season 9, but RHOBH Season 9 has not moved on from LVP. The trailer includes clips of Kyle opening up about the demise of their friendship, talk of lie detector tests, and Andy video chatting with Anderson Cooper about Vanderpump going AWOL. And, of course, there is the throw pillow that serves as a reminder that there is always a seat for LVP.

Anyway, it looks like LVP missed one heck of a reunion. I am looking forward to Denise telling it like it is, Rinna pulling faces, Camille yelling at almost everyone, and Dorit's barrettes.