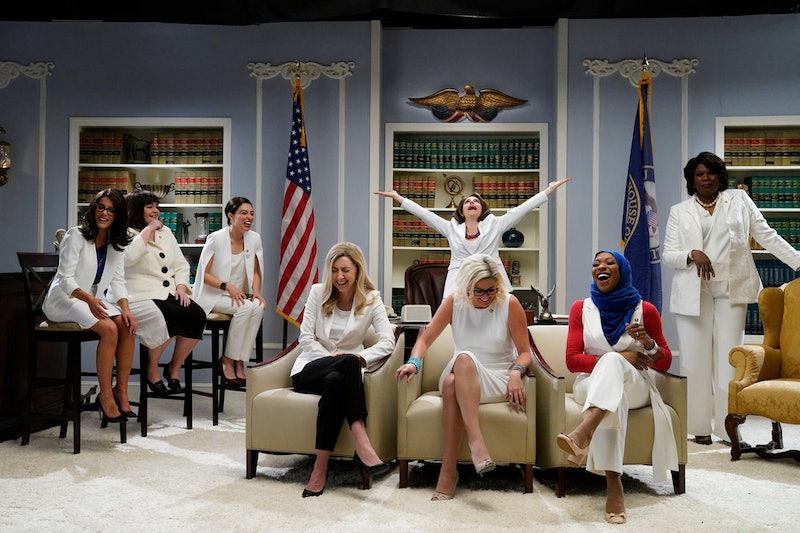 When it comes to political satire, Saturday Night Live often looks for laughs in the most dour and depressing circumstances. However, the SNL "Women Of Congress" sketch from the Feb. 9 episode celebrates female politicians in triumphant and uplifting way: by parodying Charlie's Angels. The sketch was a who's who of the many women who brought moments of lightness and levity to the occasionally grueling State Of The Union address that aired earlier in the week. In it, the women dressed in a variety of all-white outfits that they wore for the State Of The Union — but as the sketch says, "they wear white, but they're not all white and we love that."

The sketch then became a parade of impressions from all of SNL's female cast members as well as the show's host, Halsey, featuring a mix of familiar impressions that the cast members have long been perfecting, as well as a variety of new ones. The sketch's familiar impressions came in the form of Kate McKinnon's Nancy "Madame Clap Back" Pelosi, which has been a recurring character on the show for some time, as well as Melissa Villaseñor's impression of Alexandria "I Say What I Meme" Ocasio-Cortez and Leslie Jones reprisal of Maxine "Don't Go Chasing" Waters. However, the sketch breezed past these familiar figures pretty quickly in order to give the spotlight to some of the new congresswomen that captured the hearts of America following the 2018 election.

The first new impression of the night came in the form of Cecily Strong's Senator Kyrsten "Kooky Arizona Lady" Sinema, who informed audiences that she's "Bicameral, Bipartisan, and Bi." Ego Nwodim followed as Ilhan "Get The Hi-job Done" Omar, one of the first-ever Muslim women elected to congress. Beyond that, the sketch featured Aidy Bryant's Annie "Raise The Roof" Kuster, Heidi Gardner's Abigail "Say My Name, Say My Name" Spanberger, and Halsey as Rashida "Impeach The Motherf*cker" Talib.

The sketch then broke out of its credits-sequence format for a proper scene, which mostly consisted of President Donald Trump's voice echoing through a speaker — much like Charlie in the original Charlie's Angels — commending the inclusion of women in Congress as he did during the State Of The Union. Just as the women of Congress rose to their feet and started celebrating during the SOTU after being mentioned, stealing the moment from President Trump, they reclaimed this moment in the sketch by destroying the speaker emitting his voice.

The sketch was a quick, action-packed celebration at the changing look of Congress, but it was also a powerful reminder that for many people in the country — especially women, and particularly women of color — Congress is starting to look a lot more like the population of the country that they are making decisions for. Sure, Ocasio-Cortez isn't actually fighting off enemies with weaponized iPhones and Nancy Pelosi isn't avoiding danger on a jet ski, but the hope of seeing legitimate change come to Congress feels just as exciting.