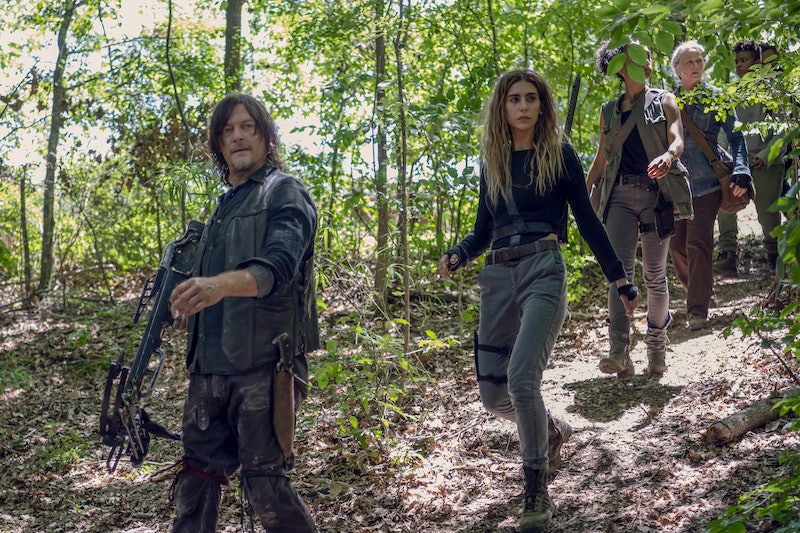 Spoilers ahead for The Walking Dead Season 10 midseason finale. Carol's pursuit of vengeance threatened to put the communities at risk throughout the first half of Season 10. But now Carol's recklessness has directly put the group in Alpha's trap with the walker cave on The Walking Dead. On a tip from Gamma, a crew consisting of Carol, Daryl, Jerry, Magna, Kelly, Aaron, and Connie went out to search for Alpha's herd. But even after Daryl had a heart-to-heart with Carol about how she needs to stop fixating on avenging Henry's death, his bestie still ran after Alpha — and right into the Whisperers' leader's trap.

After learning that Alpha didn't really kill Lydia, Gamma revealed that her real name is Mary and told Aaron where he can find the Whisperers' horde. Aaron said the location is a "sunken field on the edge of the national forest" just on the other side of the Whisperer border that Alpha established. But when they arrived, there were no walkers (or "guardians," in Whisperers-speak) to be found. Daryl, who was already suspicious of the intel from a Whisperer, believed they have been set up. While it's not clear if Gamma was in on the betrayal, Alpha was waiting for them on her side of the border and Carol couldn't help but pursue her.

Alpha led Carol into some sort of cave and while Daryl killed the zombies around the entrance, he sent in the rest of the group to assist Carol. However, Daryl had inadvertently put them all in danger since inside of this cave is the zombie herd they've been looking for. Now, some of the strongest fighters of the Alexandria and Hilltop communities are stuck underground with hundreds (possibly thousands?) of zombies.

This underground lair is actually an old mineshaft that will play a big part when Season 10 returns on Feb. 23. Talking Dead gave a behind-the-scenes look at the cave that holds Alpha's herd and the set is quite menacingly large — as in, there are plenty of places for walkers to hole up in. Showrunner Angela Kang hinted at how it won't be easy for the gang to get out of this labyrinthine underground maze in an interview with Deadline. "They've stumbled into at least like a major part of Alpha's herd. You know, they're in this cave system, so they don’t know how far these zombies might go," she said.

Reminiscent of the Terminus boxcar at the end of Season 4, it looks pretty bleak for the group with Kang calling it an "impossible situation surrounded by the herd, trapped underground" to Insider. And it's hard not to place the blame directly on Carol. If she hadn't run after Alpha, then Jerry, Kelly, Magna, Connie, Aaron, and Daryl wouldn't be stuck down there with her.

While there could very well be some casualties in the mineshaft (please spare Daryl and Connie since "Donnie" still needs to happen), a few outside people may be able to help the group. After they didn't find the herd, Daryl had kept the gang together to search for Lydia. She's out in the woods on her own after Carol betrayed her. But if she realizes that her mother has trapped them in the cave, she could come to their rescue — particularly to save Daryl. There's also Negan, who has seemingly joined Alpha but could have a plan to help his former captors. Then, there's Gamma herself, who — if she hadn't been intentionally setting Aaron up — could feel guilty that she led them into a trap.

However, the number one person who may come to save the day is Michonne. She probably won't be back in time from Virgil's island community to help Daryl and crew escape. But now that they have discovered where Alpha hides her "guardians," Michonne could use the naval base weapons Virgil promised her to destroy them. Of course, there are a lot of unknown factors here and the most pressing situation will be how Daryl, Carol, and everyone else will be able to escape the walker cave system. And when (not if) they do get out, Carol better realize that the group needs to work together to defeat Alpha and her massive herd. Because when she goes off alone, she only ends up hurting the people closest to her.