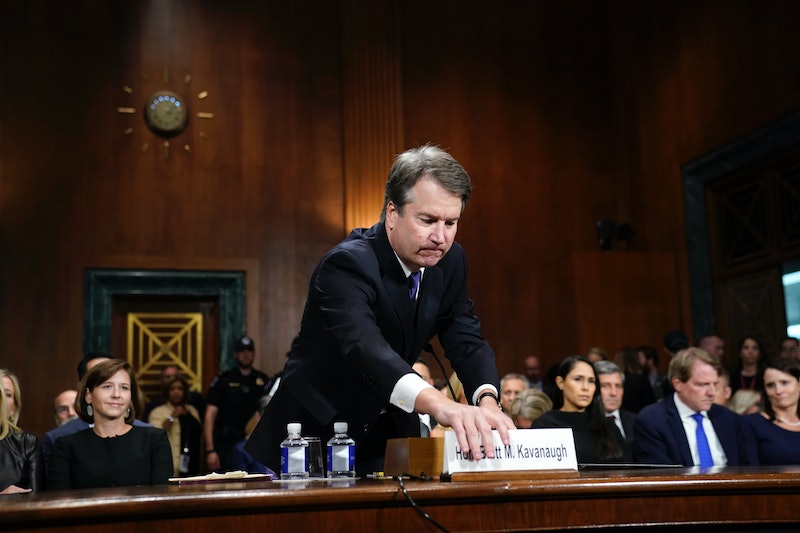 In a rare move, the editorial board of The Washington Post warned that a Kavanaugh confirmation would represent a "serious blow" to both the Supreme Court and the nation — and urged senators to "vote no." The outlet's editorial board has not issued a collective condemnation of a Supreme Court justice since Robert Bork's nomination in 1987 (Bork eventually failed to receive enough votes). "We do not say so lightly," the board wrote, "But given Republicans’ refusal to properly vet Mr. Kavanaugh, and given what we have learned about him during the process, we now believe it would be a serious blow to the court and the nation if he were confirmed."

The editorial board was quick to add that the decision to denounce Kavanaugh was not entirely due to the sexual assault allegations leveled against him recently (allegations which Kavanaugh has vehemently denied, claiming he has never assaulted anyone in his life).

Rather, the board noted several factors that have contributed to this decision. Those include the documents withheld related to Kavanaugh's White House years, the "hyperpartisan rhetoric" they say he used during his testimony last Thursday, and what they see as the GOP's utter lack of effort to find "the truth about [Christine Blasey Ford's] claim."

The editorial board wrote,

We would not have opposed Mr. Kavanaugh on [a partisan] basis, just as we did not think GOP senators should have voted against Sonia Sotomayor because they did not like her views. Rather, the reason not to vote for Mr. Kavanaugh is that senators have not been given sufficient information to consider him — and that he has given them ample evidence to believe he is unsuited for the job. The country deserves better.

This isn't the only surprising form of opposition to Kavanaugh that has emerged in the past few days. Former Supreme Court Justice John Paul Stevens recently told a crowd in Florida that he no longer believed Kavanaugh deserved to be on a bench. This is an incredibly unusual move; typically, Supreme Court justices stay entirely out of the politics of a new Supreme Court nomination.

But Stevens (a conservative, pro-life former justice) said that there was significant merit to the criticisms that Kavanaugh "has demonstrated a potential bias involving enough potential (litigation) before the court that he would not be able to perform his full responsibilities." Stevens added, "In this case, there are enough people who've been put in categories for which he would be unable to sit as a judge."

In a decidedly partisan atmosphere, it's worth noting that other conservative, pro-life organizations have stepped out against Kavanaugh. The National Council of Churches, which represents over 30 million U.S. parishioners, wrote in a statement, “During his appearance before the Senate Judiciary Committee, Judge Kavanaugh exhibited extreme partisan bias and disrespect toward certain members of the committee and thereby demonstrated that he possesses neither the temperament nor the character essential for a member of the highest court in our nation."

Additionally, over 2,400 law professors have signed a petition that was then published by The New York Times as an op-ed. The petition read, "We have differing views about the other qualifications of Judge Kavanaugh. But we are united, as professors of law and scholars of judicial institutions, in believing that he did not display the impartiality and judicial temperament requisite to sit on the highest court of our land."