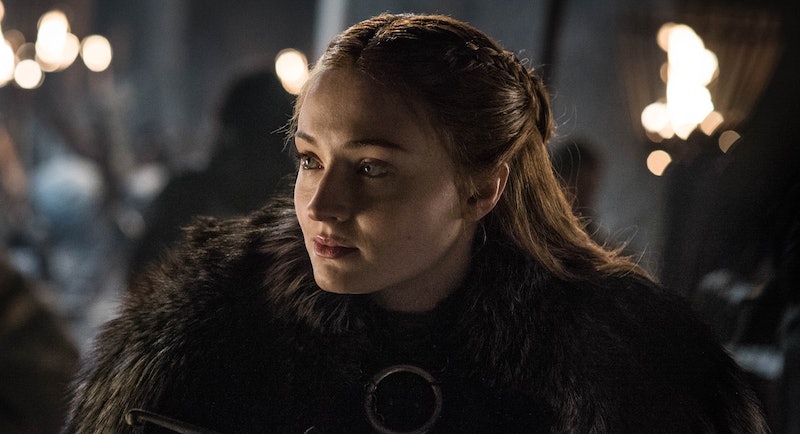 The finish line is so close, yet so far for the last surviving Game Of Thrones characters. All they have to do is make it through the final six episodes of Season 8, premiering April 14, which as fans know is so much easier said than done now that the White Walkers have gotten past The Wall. But, there's one character that fans seem especially scared for: Sansa Stark. Why? Well, there are more than a few signs that Sansa will die in GoT' that are just too obvious to ignore no matter how hard we try.

As much as we might pray to the Lord of Light that this is untrue, Sansa herself, Sophie Turner, has hinted at this season's bloodshed before. In an interview with 1883 Magazine last year, Turner said, "This season is bloodier than ever. It’s full of betrayal, full of war, full of danger. That’s all I can say without giving too much away." Like her own character's demise? Honestly, hasn't Sansa been through enough?

The writing seems to be on the Wall with signs all around that Sansa might be marked for death whether we like it or not. Here are the seven signs that Sansa might not make it out of this final season alive.

Which is very cool, but it also means she's going into battle. While she's shown she's a very good strategist — hello, it was her quick thinking that saved Jon Snow in the Battle of the Bastards — wielding a sword isn't something she's had to do before. Knowing how big this battle will be, it's hard not to feel nervous for Sansa.

2. Sansa Is "A Real, True Leader of Winterfell"

That's what Turner told Digital Spy last year and it's hard to disagree with her, as Sansa has become the one who understands adversaries better than anyone else. (Maybe a little too much if you believe the Sansa's becoming Cersei theories.) "[Sansa] is so empowered. She has a family behind her," the actor told Digital Spy. "She has Littlefinger, Cersei, Margaery, everyone's wisdom and teachings all behind her."

But, leaders of Winterfell aren't usually long for this world. Hello, both Ned Stark and Robb Stark brutally died during their reign, is Turner's comment a hint that history is about to repeat itself?

In the Game Of Thrones Season 8 teaser trailer, It has to do with the statue of Sansa in the Winterfell crypt. Look close, and you'll notice the Stark family's statues — Robb, Catelyn, and Ned — are modeled after what they looked like at the age they died. Now look at Sansa's statue, and you'll notice that she appears to be about the same age she is right now at the start of Season 8.

Another clue that Sansa isn't long for this world? The fact that Jon Snow's statue in the Stark family crypt looks to be an older man. While it gives hope to all those White Wolf stans out there that he won't die again, the age differences in the statues suggests that he might have to go on without his (kind of) sister by his side.

Sansa's statue isn't the only believable evidence that she won't make it out of this final season alive. Back in January, HBO dropped the official trailer for Game Of Thrones Season 8, in which Sansa welcomes Daenerys Targaryen to Winterfell by saying, "Winterfell is yours, your grace."

While it's a rather polite greeting, it's also a meaningful one as Reddit pointed out, according to Esquire, since it's almost exactly what Ned Stark tells Robert Baratheon when he comes to Winterfell. "Winterfell is yours," Ned says, only to later have his head chopped off. Like the Wu-Tang said, protect ya neck, Sansa.

5. The Direwolf Connection That We All Forgot

It's probably been awhile since you thought about Sansa's direwolf Lady, but it's worth reminiscing about the late magical pet and how she died way back in Season 1. According to Redditor IsadoraTarg, her early death might have foreshadowed how Sansa dies since the direwolves are believed to be closely connected to their owners' fates.

Lady lost her life to save her sister Nymeria after she bit Joffrey. Nymeria is Arya's direwolf, so it's possible, Sansa will die saving her sister's life despite being innocent of any crime. A bittersweet prediction if we've ever heard one.

Casual Game Of Thrones fans (do those exist?) might not have heard about Lady Stoneheart, who is the reanimated corpse of Catelyn Stark. She's a big factor in the book, but was not in the TV show. Now, Lady Stoneheart stans are hoping Sansa will become the revenge-seeking zombie, as reported by TheAtomic.com. So yes, in this scenario fans get to have their cake and eat it to. Sansa could technically die and still end up back on the show. After all, that worked for Jon Snow. And seriously, who wouldn't want to see Turner rock a zombie look?

7. It's Right There In The Source Material

George R.R. Martin might still be working on Winds Of Winter, but his original plan for the end of the series didn't include Sansa. In 2015, the original three-page outline for George R.R. Martin's A Song Of Ice And Fire series, which he sent to his publisher according to io9, revealed that only Tyrion Lannister, Daenerys Targaryen, Arya Stark, Bran Stark, and Jon Snow would make it out alive.

To be clear, this was Martin's plan when the books were supposed to be a trilogy. (Not to mention, this OG version included a love triangle between Arya Stark, Jon Snow, and Tyrion Lannister, which ew, gross.) A lot of things have changed since Martin submitted this outline, but is Sansa surviving one of them?

So, yes, there are signs that Sansa could die before Game Of Thrones is done. But it's also possible these are all red herrings to keep fans on their toes. Let's cross our fingers it's the latter and maybe keep them crossed until the final Game Of Thrones episode airs.

More like this
Nicola Coughlan Shared A Lady Whistledown Excerpt From ‘Bridgerton’ Season 3
By Grace Wehniainen, Alyssa Lapid and Sam Ramsden
A New 'And Just Like That' Table Read Pic Confirms A Key Character's Return
By Jack Irvin and Grace Wehniainen
Everything You Need To Know About ‘Black Panther: Wakanda Forever’
By Bustle Editors
The 'Bachelor In Paradise' Schedule Shifts To 4 Hours Every Week After The Season 8 Premiere
By Brad Witter
Get Even More From Bustle — Sign Up For The Newsletter