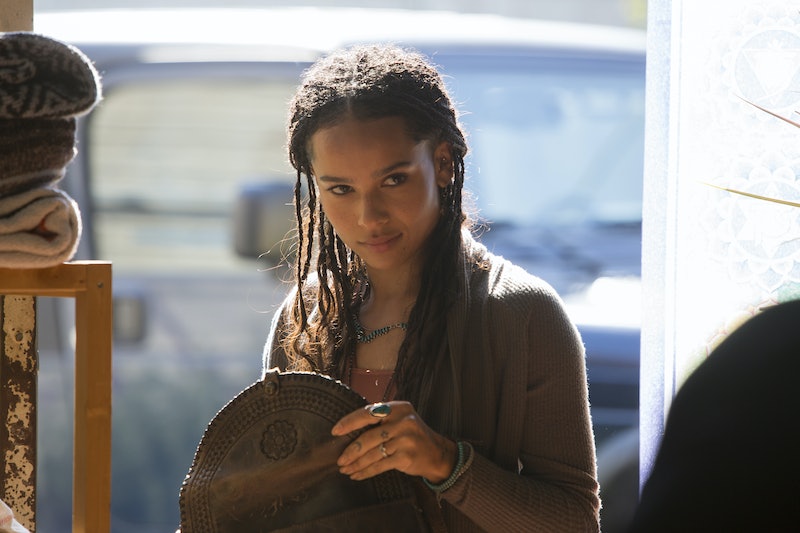 The women of Monterey are back in action. On Thursday, March 15, Zoë Kravitz and Shailene Woodley shared the first Big Little Lies Season 2 behind-the-scenes pictures, and they're glorious. In her photo, Kravitz is once again rocking Bonnie's signature braids and looking as fierce as ever. The caption reads, "Bonnie's. Back." Meanwhile, Woodley is looking casually cool in a picture that's captioned, "JANES BACK." If those two perfect captions gave you chills, just know that you're not alone.

Seeing Kravitz and Woodley back on set drives home the reality that Season 2 is actually happening, and filming is officially underway. Since Big Little Lies was originally meant to be a limited series, it's no wonder that the stars and fans are psyched to be heading back to Monterey. After all, the finale had its share of unanswered questions, and it left all of the women, especially Bonnie, in a precarious situation. Spoilers ahead.

As the person who officially put an end to Alexander Skarsgård's Perry with a well-timed shove, Bonnie will be processing the aftermath of his death in Season 2. TVLine previously hinted at what's ahead for the character, and it sounds dramatic. According to the official synopsis from HBO, in the new season:

"Bonnie struggles with Perry's death and is forced to face demons in her past."

Fans of Liane Moriarty's novel on which the series is based are well-aware that the first season left out some key details about Bonnie's past. And while the show will likely deviate from the novel as it moves forward, it sounds like there are plans to address Bonnie's own experience with abuse and how that led to her intervening on the fateful night of Perry's death.

Then there's Jane, who discovered that Perry is the man who raped her and is her son's biological father. As for what's ahead for her, HBO revealed, "While processing Perry's sudden death, Jane is trying to build a new life for herself and Ziggy."

Since this is Big Little Lies, it's unlikely that anything will go smoothly for the women. Perry is dead, but he's still going to be haunting the lives of Bonnie, Jane, Celeste, Madeline, and Renata. The first season ended with everyone being watched by a suspicious cop, and Meryl Streep has joined Season 2 as Perry's mother — which is both amazing and worrying, because she's almost certainly going to be looking for answers about the night her son died.

In a new red carpet interview with Entertainment Tonight, Kravitz revealed how exciting — and slightly unreal — it is to be working with Streep. She told ET,

"I'm still having a really hard time casually saying Meryl in the first, like, just her first name. I had lunch with the cast and Meryl, and I still can't do it. Meryl Streep, you guys. Meryl f*cking Streep!"

Having Streep join the already star-studded cast has added an extra layer of excitement for Big Little Lies Season 2 — which is saying something, because the excitement levels were already pretty high before her casting announcement was made.

While Big Little Lies Season 2 isn't expected to premiere until 2019, these first two pictures of the actors back on set are surely just a taste of the teasers yet to come. One of the best things about this cast is how much they seem to genuinely love working on the show. That means there are sure to be more behind the scenes photos in the future — maybe even some that hint at spoilers.

In the meantime, Bonnie and Jane are back to work in Monterey, and that means you're one day closer to seeing Big Little Lies Season 2.