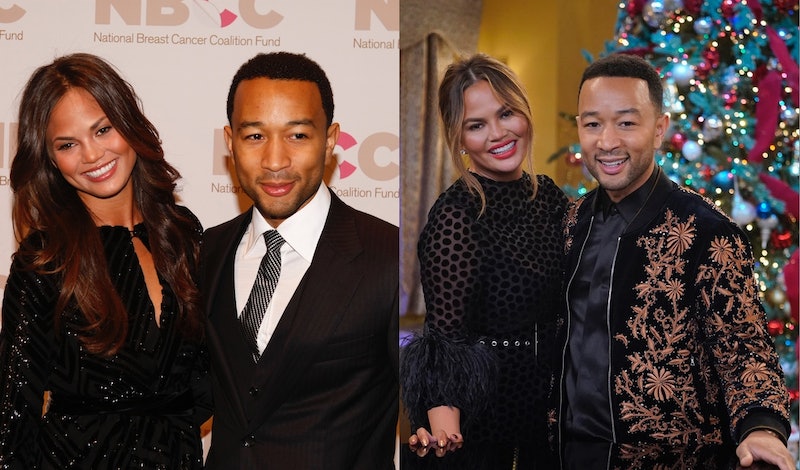 Throughout the course of their decade-plus relationship, John Legend and Chrissy Teigen have celebrated plenty of Christmases together. But A Legendary Christmas marks the first time that fans get to join in on the fun. In honor of this occasion, it feels like an apt time to look at photos of Teigen and Legend then and now. Or, at a minimum, the perfect excuse to reflect on the gift that is this beloved couple's love affair so far.

Beyond each being wildly entertaining in their own rights, Legend and Teigen have charmed the world with their envy-inducing marriage, and this is just another example of how they support one another. To coincide with Legend's performance for Christmas in Rockefeller Center and his own Christmas album, also called A Legendary Christmas, this special will showcase he and Teigen's talents, celeb friends, and adorable children. But it all wouldn't be possible without their love story, which started back in 2007. The couple was married in 2013 and now have two children. And the beautiful — and hilarious — life they've created together will be on full display for A Legendary Christmas.

You can always turn to Teigen's Twitter or Instagram for insights into their relationship, but why not take a look back at how far these legendary lovebirds have come?

Teigen met Legend when she starred in his music video for "Stereo" in 2007. Now, she's dancing by his side again in a much more family-friendly way for their Christmas special.

Going To The Grammys

One of the first events they attended together as a couple was the Grammys in 2008. Teigen may be wearing a similar hue for in 2008 and 2018, but a lot has changed for the couple over the course of a decade.

Since Legend earned an EGOT this year (Emmy-Grammy-Oscar-Tony), it's only right to show the couple attending other awards ceremonies together. The above photos show Teigen accompanying Legend to the Oscars in 2009 and most recently in 2017 where she cuddled up to him on the carpet.

Shining On The Red Carpet

Even when not an EGOT awards ceremony, Teigen manages to shine, like at the 2009 Time 100 Gala and the 2018 GQ Men of the Year Awards (where Legend was a winner). Teigen actually said during her speech at the 2018 Glamour Women of the Year Awards that the TIME 100 Gala was a turning point in her life, since she felt like she didn't belong around such accomplished people.

Speaking of the 2018 Glamour Women of the Years award, Teigen showed her affection for Legend onstage when she received her award. But that's nothing new since Teigen hasn't held back when it comes to displaying her love for Legend in the past, as this photo from the 2010 CNN Heroes tribute shows.

Teigen isn't the only publicly affectionate one, as Legend has also made his love for his wife quite clear. But this side-by-side set of Teigen kissing Legend on the cheek in 2013 and 2018 (after he won the EGOT) was just too cute not to share.

Outside of awards shows, Teigen and Legend are also sports fans, where Teigen has frequently flaunted her propensity for making funny faces. She's pictured here at the 2010 U.S. Open, as well as the International Tennis Hall of Fame 2017 Induction Ceremony. To be fair, there's another pic of her laughing at the 2017 event, but these faces show exactly why she's so meme-able.

Not all sports make Teigen nervous. She's appeared far more comfortable hanging with the Chicago Bulls mascot at the 2011 NBA All-Star game and throwing the first pitch with daughter Luna for a Seattle Mariners game in 2017 — all with Legend by her side, of course.

On the red carpet and off, Teigen and Legend always prove that they're one of the most fashionable couples around, as can be seen in these more casual pics from 2010 and 2018.

These celebs aren't afraid to give a real-world view into their home life through down-to-earth and relatable posts on social media, but when they hit the town — like in 2011 at this AIDS Research fundraiser as part of Milan Fashion Week and at the 2018 Emmys — they always look super stylish.

Teigen's epic personality wasn't always known to the world, but these photos from 2010 and 2018 show that she's always had the wicked sense of humor that helped launch her into another stratosphere of fame.

Spending Time With Their Growing Family

The couple first announced they were expecting in October 2015 after struggles with infertility, so at this event in November 2015, they were happy to show off Teigen's growing baby bump. Now, they have two adorable children, 2-year-old Luna and 6-month-old Miles, who will also appear in A Legendary Christmas.

So, let the Legend and Teigen help you kick off the holiday season with their special, because this legendary family knows a thing or two about the feeling of love that defines the Christmas spirit.