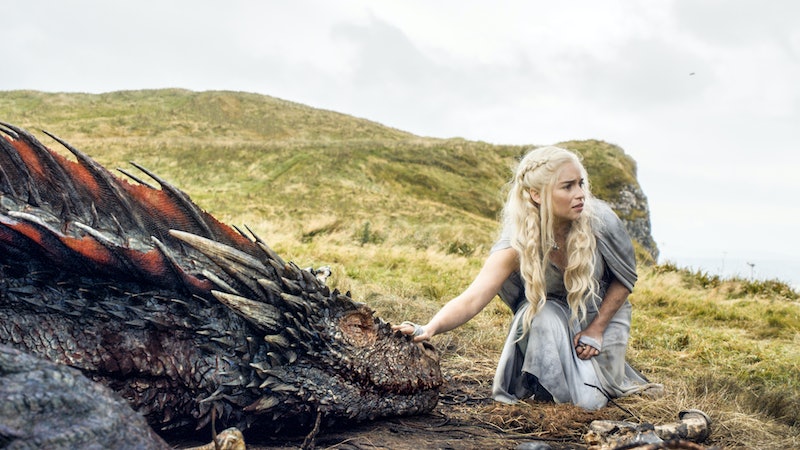 Next season, Game Of Thrones will return to the Dragonpit, but there's one important character who appears to be missing. The GOT fan site, Watchers On The Wall reported that many of your favorite Game Of Thrones stars have landed in the Spanish city of Seville to film a GoT Season 8 scene in the Dragonpit at King's Landing. You know, the place where the Targaryens used to keep their dragons back in the day when they ruled the Iron Throne. That's why it's so surprising to hear that Emilia Clarke isn't there for this shoot. So, is this the biggest clue yet that Daenerys may die in the Game of Thrones final season? Well, it depends on how you look at it.

Watchers On The Wall reported that Jon Snow himself, Kit Harington just arrived in Spain to join "more than a dozen cast members" to film a scene from Season 8 in the Dragonpit, where he also spent some time in the Season 7 finale. It's where he, along with Dany and Tyrion, tried to strike a truce with Cersei in hopes of taking down the White Walkers together.

It's been reported that Lena Headey, Peter Dinklage, and Nikolaj Coster-Waldau, who play Cersei, Tyrion, and Jaime Lannister, respectively, are all there. The Starks are well-represented with the actors who play Sansa, Arya, and Bran all accounted for, too. To round it out, these characters have also been spotted in town: Davos Seaworth, Brienne of Tarth, Sam Tarly, Gendry, Robin Arryn, Varys, Jorah Mormont, Yara Greyjoy, Grey Worm, Tyrion Lannister, Jaime Lannister, Cersei Lannister, the Night King, and Jaqen H’ghar along with the Waif. As Watchers On the Wall notes, the latter two characters are part of the Faceless Men, so it's possible that their faces are being used by someone else. Creepy, but true.

But, this long call sheet is why Clarke not being there stands out. Clearly, this is an important scene being filmed with Watchers On the Wall reporting that it's likely a scene from a later episode. If she's not there it must be for good reason. The most obvious one being that she died and there have been clues that Dany won't be making it out of Season 8 alive. But, there are some other logical reasons why Clarke isn't in Seville that don't necessarily mean that the Khaleesi's dead.

First of all, Clarke's currently promoting her new movie Solo: A Star Wars story so her absence could be an excused one. There's also a possibility that Clarke will be in this scene, but on one of her dragons. For that, she could be shot against a green screen at a later date. Watchers On the Wall reported that it is likely the Game Of Thrones final episode will also film in Spain so there's still time for her to show up.

There's also the theory that Daenerys is pregnant with Jon Snow's baby and it's possible she's unable to travel to King's Landing at that point. Of course, the fact that she's having a baby with her nephew will complicate things. But, it could possibly be the key to saving the Seven Kingdoms, since it could fulfill the Azor Ahai prophecy of the Prince That Was Promised.

Jon and Daenerys could be the "song" of ice and fire that the book's title refers to, making them the key to defeating the Night King. Their child could either be Azor Ahai or lead to one of them being the Prince That Was Promised, since the "prince" reference, in this case, is gender neutral. Perhaps, Jon has brought everyone together to tell him this good news.

Now, it's true that all of this could still mean Dany isn't long for this world — especially, if you believe this robot — fans shouldn't jump to any conclusions just yet. There are other characters that also haven't been spotted in town to film this scene including Dany's right-hand woman Missandei; Cersei's strong men Qyburn and the Mountain; Euron Greyjoy, his nephew Theon Greyjoy, Bronn, Podrick, and Tormund, who may or may not have survived the collapsing of The Wall.

The sad news is that it's likely at least one of these absentee characters is long gone. Especially since HBO has already teased that basically, everyone is going to die this season. But, for now let's just cross our fingers that Daenerys isn't one of them since there's still so much for her yet to do. Like, take her rightful seat on the Iron Throne.

More like this
15 Photos Of The 'House Of The Dragon' Cast At The Show's UK Premiere
By Radhika Menon
Does 'Locke & Key’s Ending Mean There Could Be A Season 4?
By Sophia Moore
Everything To Know About 'Evil' Season 4
By Meguire Hennes
‘The Simpsons’ Will *Finally* Address How They “Predict The Future”
By Sam Ramsden
Get Even More From Bustle — Sign Up For The Newsletter