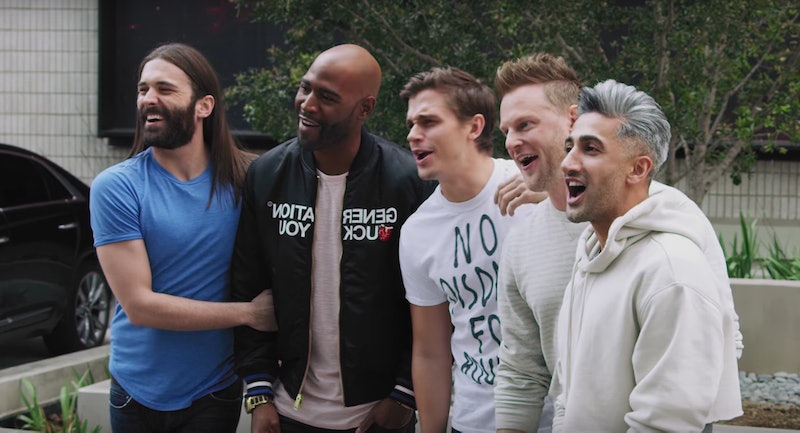 Did you already marathon the new Queer Eye reboot, and now find yourself feeling sad, empty, and generally joyless? Well, you are not alone. But fear not, because Netflix just dropped a Queer Eye bonus episode, and it's going to make you feel warm fuzzies all over again — temporarily, at least.

And while the reboot's creator David Collins — who was behind the original Queer Eye For the Straight Guy as well — has said that he's already thinking about potential episode ideas for Season 2, Netflix has yet to announce whether or not they'll renew the series. Perhaps, then, that's why the Fab Five decided to head to the Netflix headquarters in Los Angeles, California to film a quick bonus episode featuring one of Netflix's very own employees. It's basically, like, well-intentioned peer pressure where everybody wins in the end.

The bonus mini-episode (small bummer: it's only seven minutes long) begins with the Fab Five cheerfully running into the Netflix headquarters, where they bum-rush John Campbell, the self-proclaimed "King of the Nerds" — aka the manager of Netflix's IT department. "Do I know what that is?" Van Ness asks viewers. "No. Do I need their help? 100 percent. How do I delete all of those old topless pictures off the internet I don't want anymore?" He is all of us.

Van Ness then goes on to describe John "King of the Nerds" Campbell in his current state: "John is kind of like Tonya Harding before she worked on her grace and artistry. Like, she had a really fierce triple, and it was great — I just need him to, like, grace it out a little bit." This man really has a way with words, you guys.

"John seems very kind, loving, and supportive," notes Brown after asking Campbell's employees about their boss. "But I feel like he can even get to a place where he's even more confident about the man he is." The Fab Five then leads Campbell's team in an all-together-now, "YAS QUEEN," and thus the journey begins.

The entire episode takes place within the Netflix headquarters, and — without straight-up spoiling it all — the guys help Campbell become a better boss for his team in a few different ways. After a brief, motivational chat with Brown, Porowski tackles at-work snacking/"the 3 p.m. blues" with Campbell.

Next, Van Ness goes in on Campbell's beard, which he says, "is wearing you, instead of you wearing your beard." He suggests leaving Campbell's "gorgeous, full head of hair" in its natural color, and instead wants to change the shape and introduce him to hair products (which, if you've been watching the series up until now, is so crucial for so many of these dudes).

France then tackles Campbell's wardrobe, in an effort to take him from "Drab Dad to something fab." Campbell says his style icon is Bruce Springsteen, and while France doesn't attempt to try and get him into butt-tight blue jeans with a tucked-in t-shirt, he does dress him up in some all-American rockstar looks that are super handsome in a much more subtle way.

Berk takes his turn revamping the IT team's workspace, and instead of making it all comfy and home-like, opts to make it more functional by adding more surfaces for the team to put all their computers and cords and whatever. Brown talks to Campbell's team about their boss' biggest work-fears, which results in a really enthusiast/adorable group hug.

All the big reveals at the end definitely don't disappoint, and you can watch every minute of it go down via Netflix's YouTube channel.