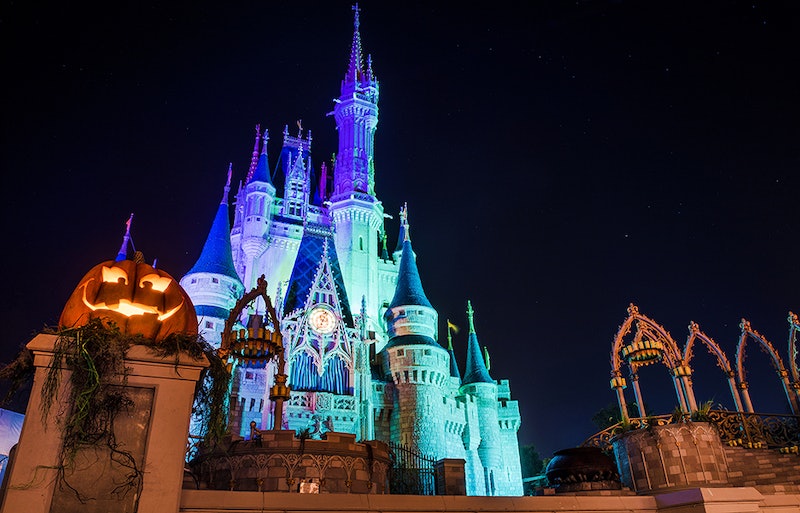 Heads up, Disney fans: Tickets for the 2019 Mickey’s Not-So-Scary Halloween Party event are already on sale. Held annually at the Magic Kingdom in Walt Disney World — Disney’s Orlando, Fla. resort — the event is a big freaking deal for people who love both Disney and Halloween; between the special food and other treats, the delightful entertainment, and the ability to ride a ton of your favorite rides after dark, it’s always a hit with the crowds. This year, you've got 36 nights to choose from in order to join in the fun. Heck, and yes.

Now, I do know what some of you are probably thinking: “Halloween? Already? It’s January.” And yes, that is true. But bear in mind that Disney World is likely to be extra packed this fall, what with Star Wars: Galaxy’s Edge scheduled to open at Disney’s Hollywood Studios late in the season; planning your Disney vacay early might therefore be a good idea. And besides, if you’re the kind of person who thinks, “Halloween is only 364 days away!” the minute the calendar ticks over to Nov. 1 each year, it’s never too early to start thinking about the spookiest holiday of the year, right?

Mickey’s Not-So-Scary Halloween Party — not to be confused with Mickey’s Halloween Party, the name given to the Halloween festivities at Disneyland in Anaheim, Calif. — has its roots in a somewhat surprising place: The open-to-the-public area currently known as Disney Springs. When it first opened in 1975, this area of Disney World was called the Lake Buena Vista Shopping Village. (It would later become known as Downtown Disney before being overhauled into Disney Springs in the early-mid 2010s.)

In order to draw both locals and visitors to this new shopping and dining destination, Disney began holding an annual Village Halloween Party, during which parents and children could go trick-or-treating throughout the Shopping Village’s stores. The Disney World resort hotels also held some seasonal festivities around this time, and a few years later, the Magic Kingdom began hosting one-off events on or around Halloween itself.

In the decades following these humble beginnings, two other major occurrences happened in Disney World history: First, the resort’s winter holiday event, Mickey’s Very Merry Christmas Party, kicked off in 1983, while what ultimately became rival park Universal Studios’ much lauded Halloween Horror Nights — an event originally called Fright Nights — launched in 1991. Seeing the success of Fright Nights, Disney needed something to compete — although, in classic Disney style, the idea was for the resort’s own event to be more family-friendly. So, they looked to their success with Mickey’s Very Merry Christmas Party and launched the first Mickey’s Not-So-Scary Halloween Party in the Magic Kingdom as a one-night event in 1995. Now, almost a quarter century later, it has expanded into the multi-month celebration we know and love today.

The YouTube channel Expedition Theme Park has a terrific video tracing the history of Mickey’ Not-So-Scary Halloween Party, by the way, so if you’re interested in going a little deeper into the whole thing, I highly recommend checking it out:

So: What’s the deal with this year’s event?

In 2019, Mickey’s Not-So-Scary Halloween Party will occur on 36 different nights. That’s two more nights than 2018, when it ran for 34 nights; what’s more, one of the party nights will occur the day after Halloween, which is also new for this year. Five of the dates will occur in August, primarily on Tuesdays and Fridays; 12 of them are in September, largely on Mondays or Tuesdays, Fridays, and Sundays; 18 will occur in October over a wide range of days of the week; and the last one will be held on Friday, Nov. 1. The full list of dates is as follows:

Ticket prices for Mickey’s Not-So-Scary Halloween Party vary depending on the day you go; they range from $74 to $130 for kids age nine and under and $79 to $135 for everyone age 10 and up. The least expensive dates are typically the ones held on Tuesdays in August and the first three weeks of September, while the most expensive date is Halloween itself.

(Did I mention that there's a Hocus Pocus show at Mickey's Not-So-Scary Halloween Party? Because there is.)

Mickey’s Not-So-Scary Halloween Party is a special event, which means it requires a separate ticket beyond general park admission to attend. The good news, though, is that if you’re only going to the Magic Kingdom for the party, you don’t need to buy general park admission in addition to the Halloween party ticket, according to the Disney Parks Mom Panel (an official Disney site). The party usually begins at 7 p.m., with ticket holders being admitted starting at 4 p.m. If you’re not planning on doing anything in the Magic Kingdom before 4 p.m., all you need is the Halloween party ticket. Indeed, Disney Tourist Blog recommends spending the day doing something else — for example, going to one of the water parks or exploring Disney Springs — and heading to the Magic Kingdom for the party at 4 p.m. or later as a means of saving a few bucks on your trip.

However, if you intend to spend the entire day at the Magic Kingdom and then continue your time there for the Halloween party, you will need to buy both general park admission and a Halloween party ticket. Just, y’know, something to keep in mind.